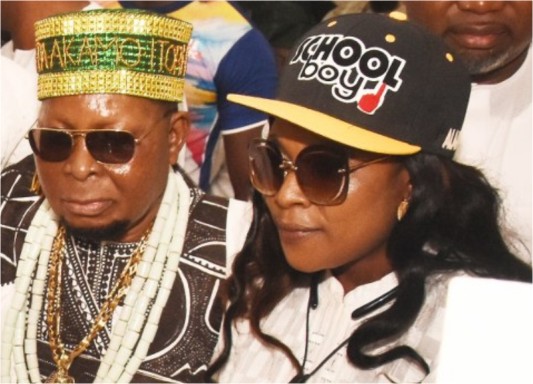 Alhaji Taoreed Faronbi, the foremost Lagos socialite and one of the popular Lagos land speculators also called Baba Alado few days ago stunned many as he stepped out with his new wife, Alhaja Modinat at Olu Itori, Oba Abdulfatai Akorede Akamo’s 60th  birthday.

Alhaji Taoreed Faronbi (a.k.a Alado) who is the head (Olori Ebi) of Alagbeji Royal family in Papa Ajao, Mushin, Lagos came in a few minutes past 3 pm all clad in white Cotton Swiss Lace with his large entourage all clad in Royal blue T-shirt with the name “School Boy”.

While many were busy admiring the 5th head of the Alagbeji family for being so relevant after rocking the social scene for over 40 years, many couldn’t take their eyes off his new pretty young wife, Alhaja Modinat.

Despite the huge age difference,  Baba Alado and his new wife looked so perfect together that many guests couldn’t stop talking about them. Alhaja Modi was spotted in the same cotton Atiku fabric with Baba Alado. She rocked an unusual style of female Babariga matched with the same “School Boy” cap. Many of her husband’s followers were seen respecting her.

A few minutes past 6 pm, Alhaja Modi who looked young and probably in her 30s walked hand in hand with her hubby to rock K1 on stage spraying 500 naira denomination on King Wasiu Ayinde Marshal.

Don’t forget that Baba Alado is not just popular but influential. He is a land speculator with a difference. Many musicians like K1, Osupa, Pasuma and many others sing his praise. Though he used to stay at Mushin being the head of the popular Mushin family but he now stays at Isheri Osun.

Baba Alado is a man of many titles. He has many chieftaincy titles and he is the Baba Oba of Itoriland. This is one of the reasons why he came in early to honour Kabiyesi.

How To Download City People Digital Edition For The Week

How Otunba LEKAN BELLO Hit It BIG In Corporate NIGERIA

We don’t have plans to arrest Saraki...