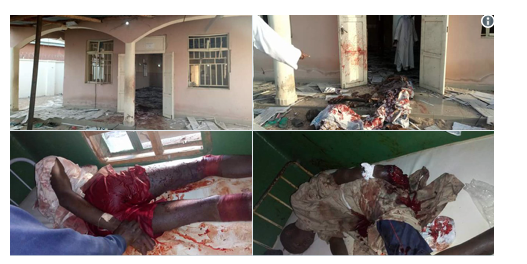 Over 105 persons have been confirmed dead in two deadly attacks in Adamawa State in the last 48 hours, with several scores of others sustaining serious injuries.

While 60 persons were killed by two suicide bombers at a mosque in Mubi, early yesterday, morning, 45 nomadic Fulani herdsmen were allegedly killed by unknown gunmen at Kikan community in Numan Local Government Area of the state.

Although eyewitness account said 60 persons died in the blasts, the state police command, which confirmed 50, also confirmed the 45 killed in Numan.

According to an eyewitness, the two suicide bombers ran from two directions into the mosque at exactly 5:05am, yesterday, while Muslim faithful were observing the SUBHI (morning prayers).

The eyewitness, who identified himself as Bello Fari, said he escaped death by the whiskers as he was equally rushing to meet up the two rak’at prayers.

Fari said: “My house is close to the mosque. I was almost late for the prayers and as I was rushing, I saw two supposed worshippers rushing to enter the mosque though there was some gap between me and them. Moments after the duo entered the mosque, there was a loud bang.

“The bombers waited until the nearly 150-capacity mosque was filled to capacity before they struck.

“Moment after the blast, the prayer was short-lived as the worshippers scampered for their safety, even as I watched from a close range.”

Fari said he immediately ran back into his house to evacuate his family to another part of the city for safety, saying the magnitude of the attack and the loss of human lives were so devastating.

Speaking on the attack, Chairman of Mubi North Local Government Area, Alhaji Musa Bello, who confirmed the incident, said though the casualty figure was being compiled, it was  dozens, with many more injured, some critically.