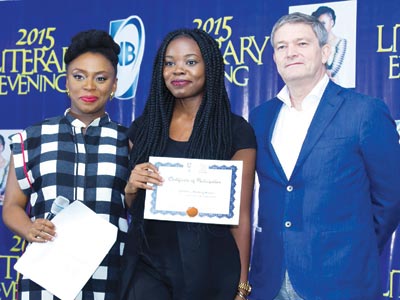 While there is no official statement from the brewing conglomerate why it has to stop partnering with the Adichie and Farafina Trust for the wonderful literary initiative, P.M.EXPRESS gathered that the company decided to end the sponsorship after reviewing all the projects it’s supporting and resolved to do away with some and give verve to fresh initiatives.

A source close to the company told our correspondent that their was no dispute as the company believed entirely in the creative writing workshop which has helped to discover and sharpen literary skills in Nigeria but after five straight years, they had to review the relationship.

According to him, as a socially responsible company, Nigerian Breweries is committed to championing causes that add value to the society and will continue its role of interventions, discoveries and encouraging talented Nigerians to be the best they could be.

Meanwhile, this latest development has affected the planning as the 2017 edition of the Creative Writing Workshop will not hold.

“I am sorry to announce that the Farafina Trust Writing Workshop will be unable to hold this year, which would have been its tenth year,” stated Dr. Eghosa Imasuen, who is the Director, Business Development for Narrative Landscape Press on behalf of Chimamanda Adichie the writer and founder of the workshop.

Imasuen explained that the abrupt withdrawal of Nigerian Breweries Plc has affected the planning of the workshop that would have been in its tenth edition this year as they now need to streamline their expenditure.

He however thanked the brewing conglomerate for encouraging the development of literary talent in Nigeria and Africa.

“In the years since NB Plc’s involvement, many alumni have gone on to confirm the promise they showed at the workshop,” Imasuen said.

He added that the organisers are optimistic about the future as they are moved not only by their commitment to the growth of writing but also the initial reaction of potential sponsors and partners.

“Our commitment has not wavered nor has the commitment of those who have worked to make this decade-long endeavour the success that it has been. We will take this time off to establish a new organisation and structure that will provide a more stable foundation for the workshop and other initiatives,” Imasuen’s statement read.

Tesco is the first to can plastic...