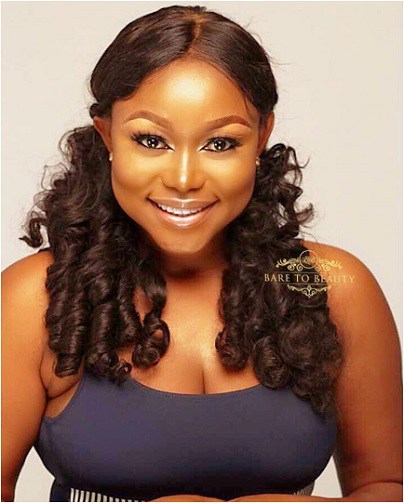 She is blessed with good looks and a lovely physique that will make you take a second glance at her whenever you run into her.  But Ruth is not all about beauty alone. She’s got a lot of brains and brawn to match it. That should not come as a surprise. Her job requires that she be cerebral. She is one of Nigeria’s most talented scriptwriters,  who churn out very brilliant scripts in Nollywood. Interestingly, she’s also a damn good actress, who always gives a good inter-presentation of her roles, because she fits into any role so effortlessly.

Last week, in Lagos, City People asked this pretty fast-rising actress how she felt being in hot demand by producers. She is today one of the busiest actresses in Nollywood, as she moves from one location to the other. “I would say if you want a thing bad enough, go out there and get it”, was her response. Coming into an Igbo dominated industry and being an Edo girl, it was difficult from the outset. Like you rightly said today I am extremely busy. But truthfully I started like that. It took hard work, perseverance and above all, commitment to my career to get to where I am today.  There were times when I would have one by booking in two months.  Looking back today I would say to God be the glory.”

“It’s been amazing, it’s been a positive evolution, we may not have got  to where we want to get to yet, but I would say we have made progress.”

Unlike most other actresses, Ruth is multi-talented. She writes, scripts. You act well and also produce. How does she juggle all these roles?

“It is often said that necessity is the mother of invention. Juggling the 3 isn’t  the easiest of things to do. However, it was birthed from my hunger to be a step ahead, and a constant urge to add value to myself to make my brand more marketable. I went into scriptwriting out of the frustration that came with waiting in a long queue to be auditioned and yet not getting the job afterward. It was even worse for me because I wasn’t willing to compromise in any way to get the job. So, I thought that I could learn how to write. Then it would bring an extra income to the table since the frustration that came with going for auditioning was so uncertain. Likewise, becoming a Producer was birthed from the viewpoint of diversification and awareness I have that I can’t be an actor forever.”

At what point did she start acting?

“I started on the movie, Boys Cut. That was the one I featured in first. But I didn’t write it.

“What has been your biggest challenge?

“Truthfully, it has not been so difficult because it wasn’t as tough as what someone who set out to act will face. It was easier for me because I was coming in as a crew member. My biggest challenge would be the fact that a lot of people don’t know how to differentiate between my work as a writer and that of an actress. There was a time I had to stop writing for a while so that people would understand the fact that it does not mean because you can write well so you can act well.

Where was Ruth born? Where did she grow up?

I was born in Benin. I grew up in Lagos. I attended Word of Faith Nursery and Primary School in Benin.

Then, I came to Lagos. I went to the Ford Foundation College. Then I went to Yaba Tech to study Business Administration (OND). Then, I went to UNILAG to study Mass Comm.”

So, what made you go into the movie world?

“I have always loved Entertainment, story writing. It started from my days in Secondary School. I wasn’t even in the drama group. But in Church, I was. I started writing when I went for an audition with a friend of mine. When I got there, I saw that the crowd was much, so I saw a notice saying Screen Writers needed. I said oh! Why don’t I try it?  The person in charge was someone I knew. He said he had a class and the told me how he lectures. He said I should sit and learn. That was how it started. I attended the lecture for some time. I learnt the art of how to write a script. So by the time I left school I was already used to writing. My first script was a hit.

Interestingly, the first person, who took the script rejected it. The 2nd person collected it and liked it. That was it.

How do you develop ideas for scripts? How do you come up with storylines? “First of all, you have to have a very creative imagination. You have to read a lot and talk a lot. I talk a lot when I am with people I am very comfortable with it. You must also be able to discuss with other people it helps you adjust your thought.

So, which of the 2 brought you to limelight?

“They go hand in hand. They go both ways. The fact that my first script was a high one helped me a lot. It gave me quicker recognition than I probably would have had if I was hustling to get a role. I have written about 26 scripts or more now.

How do you cope with the intellectual demands of your job as a scriptwriter?

“It’s not so difficult for me. There is this satisfaction that I get from writing that I have never ever experienced as an actress.” How do you feel when you eventually finish writing a good script?

“There is this rush in me, it is there, and you can feel it inside you, knowing that somebody is going to make use of it. It comes at the end of the script you write knowing you have been able to come up with something that someone else will make use of what you are doing. Then, knowing that not everybody can do what you are doing. A lot of people claim to write scripts, but a lot of people write a lot of nonsense.”

Are there those you respect in the field? “Yes. I respect the likes of Yinka Ogun, and then. Pascal Amango. Then, there is a guy who wrote Kunle Afolayan’s latest movie production “I just shot one of its scene called Matters arising.

But it’s not out yet”

At what stage is Ruth Kadiri now?

“I think I have become more mature, I am a bit more focused. I understand what I want. I have been able to define myself, which is very important in life. If not, you will just go with the flow.

I have been able to financially achieve other things as a person.

There is this joy I get knowing that I don’t solely depend on acting in a movie or writing a script to be able to survive. That freedom is what I have always wanted as a person, getting there makes it better for me. When you are not writing a script or acting, what else do you do?

“We have a clothing line, my partner and I. It’s called K and R line. We design clothes. I have invested in a couple of other things.

One thing that Ruth does not like is the fact that a lot of people don’t have so much value and respect for the profession. They watch movies. Some of them can’t do without it, yet they can’t stop castigating and running down actors. That is why I feel better telling somebody that I am a writer than say I am an actress. In fact I get more respect. It kind of hurts me. That is the aspect I don’t like.

READ ALSO: THE INTIMATE STORY OF MY 6 YR MARRIAGE TO K1

RUTH KADIRI Steps Up Her Game In Nollywood was last modified: September 3rd, 2018 by Seye Kehinde