Home News VP Osinbajo Is On The Path To Set Nigeria On A Positive Change – Ex Kaduna Gov, Umar
NewsPolitics 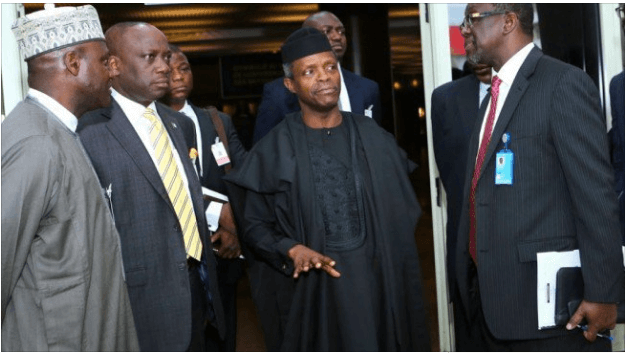 Ex-military governor of Kaduna state, Abubakar Dangiwa Umar, has praised Acting President Yemi Osinbajo for “setting the country on the path of positive change”.
In a statement on Thursday, Umar said the efforts of Osinbajo appeared to have convinced the “belligerents” to engage in meaningful dialogue.
He said this led to the suspension of acts of sabotage by the Niger Delta militants, allowing the country’s crude oil output to rise to over two million barrels per day.
“Since taking over, the acting president has embarked on measures which have effectively set the country on the path of positive change,” the retired colonel said.
“The acting president’s initiative appeared to have convinced the belligerents to engage in meaningful dialogue. This has led to the suspension of acts of sabotage and in raising our crude oil output to the optimum level of over two million barrels per day; as per our OPEC quota.
“Power generation has also gone up substantially, thanks to the reduction in gas pipeline vandalism.”
He said President Muhammadu Buhari’s “doctrine” of favouring those regions that voted for him in the 2015 elections led to a determined “Niger Delta militancy”.
Umar said the Niger Delta and the south-eastern part of the country feel “genuinely alienated by the federal government’s discriminatory doctrine”.
“The implementation of this policy in the initial political appointments including those of the military service chiefs had the negative effect of spawning a more determined Niger Delta militancy,” he said.
“That in turn, succeeded in crippling most of the nation’s oil and gas assets. As we all know, this country depends for over 90 percent of its foreign exchange earnings and an equally huge proportion of governments’ revenue on the oil resources in that region.
“Even more, it exacerbated the agitation for an independent state of Biafra.”
He commended Buhari for his “prompt transfer of power” to his deputy as required by law.
“This will undoubtedly enhance and sustain our nascent democracy. All people of goodwill must condemn those who are making ill thought out comments that portray the acting president as a puppet and who needs continuous prompting from his principal to function,” Umar said.
“This is likely to cause ill will and disaffection between them. The acting president must continue, undeterred with the good actions he has already started.”

VP Osinbajo Is On The Path To Set Nigeria On A Positive Change – Ex Kaduna Gov, Umar was last modified: March 2nd, 2017 by Damilare Salami