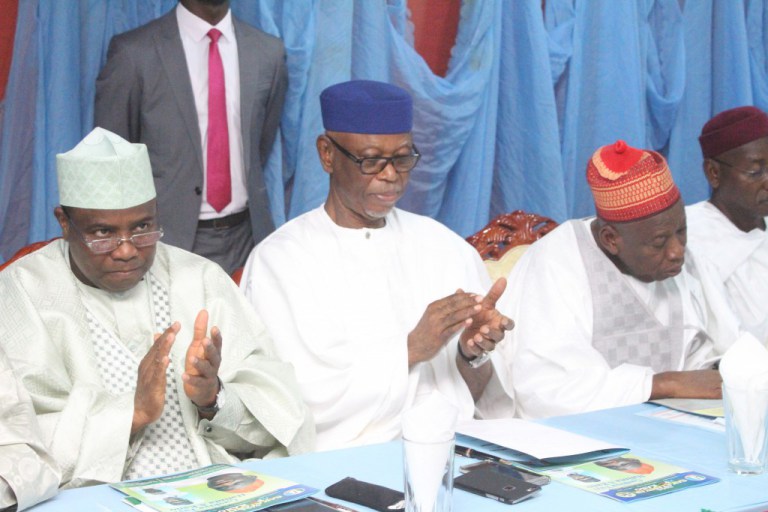 The, APC, will hold its mid-term non-elective National Convention on April 29, 2017 in Abuja.

This was revealed by the Governor of Zamfara State, Yari Abubakar, shortly after the governors held a closed door meeting with the leadership of the party at its national secretariat, Abuja, on Thursday.

Mr. Abubakar also said the governors collectively told the National Working Committee, NWC, of their readiness to give maximum support to the Federal Government.

The National Chairman of the party, John Odigie-Oyegun, had earlier in an opening remark said the meeting is part of the series of meetings held with elected officials as the party prepares to hold a non-elective mid-term convention.

Mr. Odigie-Oyegun said the forthcoming mid-term non-elective convention is mandatory and the purpose is to allow the party in government “sit down and see how far we have gone, what we have done right, assess ourselves by bringing our leaders from all over the country to sit with us once every two years and exchange ideas and listen to the achievements of their government.”

Some of the APC governors were not present and did not send representatives to the meeting, a situation the national chairman blamed on “mis-communication”.

Governors Nasir El-Rufai of Kaduna, Mohammed Jibrilla of Adamawa and Ibikunle Amosun of Ogun were not in attendance.

“I am quite aware that this is due to miscommunication, a lot of you became aware of this meeting today and the fact that you are here is a matter of deep pride.

“The purpose of the meeting is very clear. There are lots of things that must happen in preparation towards our non-elective convention which the states must be actively involved.

“We are going to have state congresses, ward congresses and fill vacancies. We will take the opportunity to fill every single vacancy at all levels of the party arising from death, appointment and others. We are also required to elect three delegates who will participate in the forthcoming convention,” he said.

The APC chairman also said President Muhammadu Buhari, who is currently in the United Kingdom, UK, on medical vacation has done the right thing by properly transferring power to his deputy, Yemi Osinbajo.

Mr. Odigie-Oyegun said there is no need for the constant negative reports about Mr. Buhari’s departure; especially on the social media.

“What makes me happy is that in spite of these negative speculations and attempt to destabilise the polity, thanks to his respect for due process and the constitution of this nation he has left a structure that is functioning very effectively in spite of his unfortunate absence.

“One can say quite clearly that the wish of Mr. President is that the government will continue to function efficiently and effectively and that the party also should continue and proceed to execute its normal duties and functions,” he said.

Still coming down on the negative reports, the APC chairman said “today, the papers were replete with all manner of speculations which has become the past time of the social media to carry all manner of fake and totally out of line speculations as to any step that we take on virtually any issue. I think this is something that we have to talk about later.”

While debunking some of the reports as regards President Buhari’s health, the party chief said: “it is important to say that our meeting today has absolutely nothing to do with the health status of the president.”

Revealed! 25 OYO APC Chieftains Who Will...