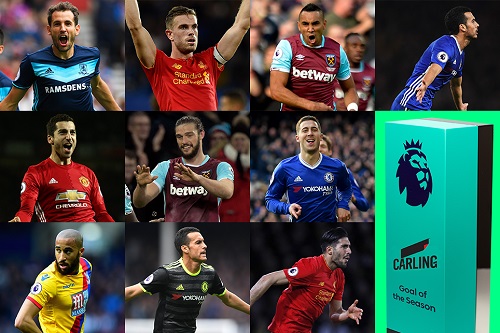 Here are the 10 amazing goals contesting to win the 2016/17 best Premier League goal of the Season.

The 2016/17 football season may be over but the Premier League has released a collection of 10 goals that have made the cut for the goal of the year.
The nominees include wonder strikes from Liverpool, Chelsea, and Manchester United players.
The public has been invited to vote for goal of the year and these views, combined with those of a panel of experts, will decide the winner. Voting closes on Wednesday.
Here are the nominees for the best goal of the season:
1. Christhian Stuani – Sunderland v Middlesbrough – 21 August 2016
2. Jordan Henderson – Chelsea v Liverpool – 16 September 2016
3. Dmitri Payet – West Ham United v Middlesbrough – 1 October 2016
4. Pedro – Chelsea v Tottenham Hotspur – 26 November 2016
5. Henrik Mkhitaryan – Manchester United v Sunderland – 26 December 2016
6. Andy Carroll – West Ham United v Crystal Palace – 14 January 2017
7. Eden Hazard – Chelsea v Arsenal – 4 February 2017
8. Andros Townsend – West Bromwich Albion v Crystal Palace – 4 March 2017
9. Pedro – Everton v Chelsea – 30 April 2017
10. Emre Can – Watford v Liverpool – 1 May 2017.
Liverpool’s Can has already won one goal of the season competition. Viewers of BBC Premier League highlights show “Match of the Day” voted for his overhead kick on Sunday night.
10 Best Goals of the 2016/17 Premier League Season was last modified: May 23rd, 2017 by Arinze Ago

Nigerians Deserve To Know If Buhari Is Dead – Fani-Kayode.