Home News Over 1000 Nigerians Are in Chinese Prison
News 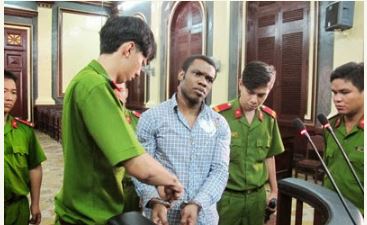 Several Nigerians are currently languishing in Chinese prisons for various offences with an urgent call being made to the federal government to look into their plight.

Chairman of Blue Diamond Logistics, China, Mr Festus Mbisiogu, has called on the Federal Government to urgently look into the growing number of Nigerians detained in Chinese prisons over allegations of drug trafficking, saying that more than 1000 Nigerians are in Chinese prisons.
Speaking on the backdrop of a protest in Abuja, yesterday, over the increasing number of Nigerian citizens in Chinese jails, he urged state governors to embark on enlightenment campaigns to discourage indigenes of their states against drug trafficking. The Blue Diamond boss, who had been in the forefront of the campaign against drug trafficking in China, called on security agencies at international airports in Nigeria to be very vigilant and thoroughly screen intending Nigerian passengers to China.
Also, he cautioned Nigerians coming to China to be wary of the parcels they collect to deliver in China, noting that some detained Nigerians may not be guilty of the crimes they were alleged to have committed. His words: ‘’There is no doubt that illicit drugs and trafficking undermine state authority and the rule of law by fuelling corruption, compromising elections, and hurting the legitimate economy and significant impact on the livelihoods and quality of life of citizens, most particularly the poor, our women and children including all of us, because one way or the other, we are involved. If Nigerians are being deceived that there are jobs in China, they should have a rethink. There are no jobs here except the person wants to establish a business.
‘’This is the time for Nigerians to rise and say no to drugs because drugs and crime undermine development by eroding social and human capital. The direct impacts of victimisation, discrimination, image problem, as well as fear of crime, impede the socio-economic development of all, including genuine businessmen and women and others sitting in this hall. It also leads to restriction of movements as already highlighted by the position of Chinese authorities on some of us.
“It also impedes access to possible employment and educational opportunities, and it discourages the accumulation of assets. ‘’Nigerian citizens used to be China’s favourite but these unlawful behaviours robbed the average Nigerian immigrant and businessman in China that privilege.
“The negative effects of drug trafficking and unlawful behaviours go beyond the shores of China. I can’t remember any former drug dealer who is at peace with the proceeds made from drug trafficking whether for himself or for his children. Therefore, why should you continue to plot your own ruin in life?”
Over 1000 Nigerians Are in Chinese Prison was last modified: May 19th, 2017 by Arinze Ago