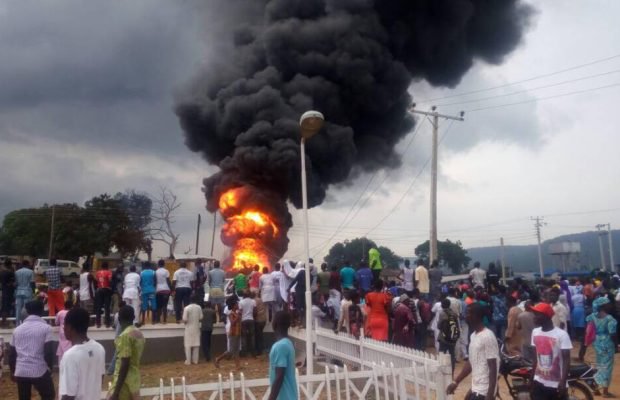 No fewer than 25 people have just lost their lives in a fatal accident that occurred Kogi State involving a tanker conveying fuel and an eighteen seater bus coming from the North.

DAILY POST reports that both vehicles got burnt to ashes.

The accident which occurred between Fefele-Okene Abuja Road at about 1:30pm Friday saw residents of the area scampering for safety.

When DAILY POST reporter visited the scene at exactly 2:05pm, officers of the Fire Service were yet to arrive at the scene.

But when they later came at about 2:20pm to salvage the situation, they could only help for a few minutes as their water got finished while fighting the ranging fire.

Our reporter who is currently at the scene of the incident observed that 18 unidentified bodies were seen lifeless on the ground.

Equally consumed in the inferno were about 10 cars parked by the road side.

Sympathizers watching helplessly expressed shock and blamed the bad nature of the road for the accident.

” The tanker and the eighteen seater bus were trying to overtake each other. But unfortunately, the tanker lost balance and it fell on the bus.

“We have been complaining to the government to fix this road. Now you can see how many lives that have been lost. No fewer than 25 burnt bodies can be seen here.” Ibrahim added.

Another eyewitness, Haruna Sadiq who sympathize with families of those who lost their lives said they have been calling the fire authority for more 20 minute but they claimed there was no fuel in their vehicle.

” I am really disappointed with our firemen. We have been calling them that people are dying here, but all we could hear is that they don’t have fuel. What a shame.” he lamented.

He, however, appealed to the government to do the needful, stating that a similar accident happened in this same spot where lives were also lost.

As at the time of filing this report, the fire is still on.

The Federal Road Safety Corps, Kogi State command is yet to confirm the accident and come up with an official casualties figure