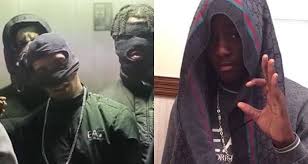 A 15-year-old Nigerian boy, Jordan Gbolade Jaiyeola, was stabbed to death when a mass brawl broke out as some 200 teenagers were leaving a 16th birthday party at a community centre in London.

The schoolboy, locally known as Jordan Douherty, was stabbed after a large group of youths were turned away from the party because the venue was at full capacity.

Shocked friends of the victim were heard screaming and crying, ‘They’ve killed my best friend’, after the boy collapsed around 9pm on Saturday, reports Daily Mail.

Police and paramedics arrived to find up to 200 teenagers running and screaming in panic as the 15-year-old lay in the street in Romford, East London.

Jordan is believed to have featured in a number of YouTube videos of drill rap music, a hip-hop subgenre that is said to be driving the feuding gang war in London.

He performs with the group C17 under the name Young Valenti – while his older brother Roland performs as Valenti, reported The Sun.

One resident who gave her name only as Ellie said: ‘There were two or three boys screaming, “He’s not moving, he’s dead.”

‘There was a big group on the corner with just the boy on the floor. There were paramedics doing shocks and CPR on him for quite a while.”

When it wasn’t successful, they covered him with a sheet, that was soon covered in his blood.