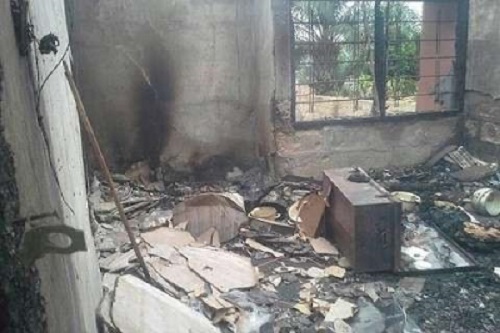 A randy boyfriend has paid the hard way after his girlfriend set his house on fire for allegedly cheating on her.

According to a report by Pulse Ghana, a hurt woman identified as Priscilla Berfi, 20, has rendered her boyfriend homeless after she recently set his house at Deduako in the Oforikrom Constituency of the Ashanti Region ablaze for allegedly cheating on her.
While narrating the sad incident, the boyfriend, Kofi Adusei said he had ceased taking care of Priscilla, who is pregnant due to her bad attitude and lack of respect towards him.
He said Priscilla visited him on the night of the incident but they had a misunderstanding so he decided not to spend the night in the same room with her.
According to him, he left the room and went to sleep in another where a second girlfriend was waiting for him.
‘While relaxing in the other room, I perceived smoke and so I thought she had taken some of my clothing out to burn them. I really wasn’t bothered, but later I heard shouts and calls that my room is on fire, we rushed to see the room in flames with Priscilla nowhere to be found,’ he said.
After the incident, Kofi however, reported the issue to the police and the suspect has since been arrested by Kwame Nkrumah of Science and Technology (KNUST) District Police Command to help with further investigations.
20-Year-Old Ghanaian Lady Sets Boyfriend’s House Ablaze For Cheating On Her (Photo) was last modified: May 28th, 2017 by Arinze Ago

Help! My Wife Is Cheating On Me!