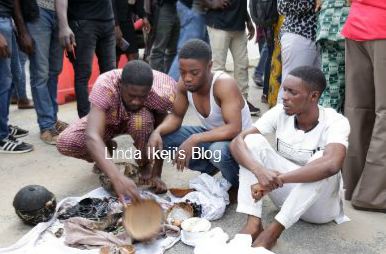 The Lagos state police command have arrested and paraded three brothers who specialize in making ‘spiritual’ soaps for business owners in order to attract customers, according to a report by LIB.
Korede Ojo, Ifedayo Ojo and Akinola Faleke who all reside at Folashade street, Maruwa bus-stop, Lekki Phase 1 reportedly operate from their home. They have a shrine with blood stains from fowl which is where they produce the spiritual soaps that they sell to their customers.
Speaking about the incident, one of the suspects, Akinola Faleke said: “It was my brother who rented the house where they operate from. We make soap for people who are unable to sell their market. When we give them the soap, they will use it to have their bathe and this will attract customers. We give the soap all the business people no matter the type of products you sell. We usually collect 3,000-5,000 from our victims.” Akinola revealed that they sell most of their products to prostitutes who operate in the area.
He said: “I moved to this area on the 25th of last month. So I have mostly sold to all these ladies who do ashewo business.”
The Lagos state commissioner of police, Imohimi Edgar revealed that suspects will soon be charged to court.
3 Brothers Who Specialize in Making ‘Spiritual Soaps’ for Business Owners Arrested in Lagos State (Photos) was last modified: October 24th, 2017 by Arinze Ago