Home News The 3 Things I Did To Revive NIMASA In 2 Years •DG NIMASA, DAKUKU PETERSIDE
News

The 3 Things I Did To Revive NIMASA In 2 Years •DG NIMASA, DAKUKU PETERSIDE 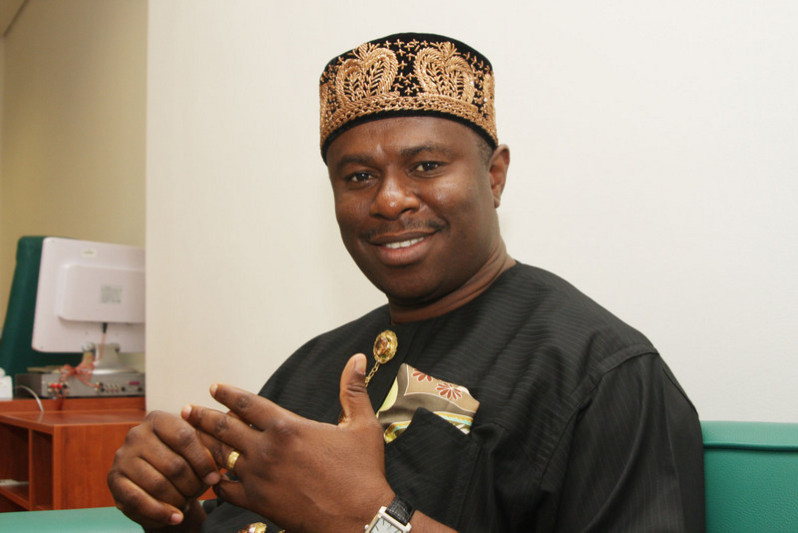 He has a formidable character. At the mention of the name Dakuku Peterside, people stop to pay attention and listen to this very articulate and engaging man speak. We are talking about a man who is widely regarded as a charismatic and disciplined leader who takes no prisoners whenever he goes about the discharge of his responsibilities.

Two years ago when this former member of the Nigeria’s House of Representatives was appointed as the DG of NIMASA, only very few people thought a big deal of his appointment at the time. In fact, many thought he was going to go the way of his predecessors whose tenures were nothing to write home about. But this man of integrity and strategic insight has proven every single one of them wrong.

With his tenacity, transparency and intellectual depth, he has turned around the fortunes of NIMASA and transformed it into perhaps Nigeria’s most flourishing government agency, generating incomes for the federal in mind boggling digits that were unprecedented in the history of the agency.

This prominent and illustrious son of River state is also a top politician and is regarded as one of the political ‘power houses’ in River state APC today. On Sunday 18th March, 2018, Dr. Dakuku Peterside was honoured at the 21st City People Award For Excellence that took place at the Balmoral Event Centre, Oregun, Lagos.

The hardworking and accomplished DG not only personally attended the awards ceremony, he also came with a powerful entourage made up of his top management staff. He also spent a great deal of time too. City People’s Senior Editor, WALE LAWAL, approached the DG and he graciously agreed to a few minutes chat. Below are excerpts.

In just two years, sir, you have made such a tremendous impact as the DG of NIMASA and you have enjoyed the trust and confidence of the people, how have you been able to achieve this?

I work with stake holders as a team, that’s one. Two, honesty and transparency will always be acknowledged by everybody. I won’t let anybody take away my integrity. They can take away everything but not my integrity. So, I say what I mean and I mean what I say. I’ve been open with stakeholders.

Everybody must know where you’re headed. Where there’s no vision, the people definitely will not understand where you’re going. So, once you’ve identified your vision and get the people to agree with you, you must now mobilize resources, mobilize materials to actualize that vision.

When I came, we all agreed on the vision and the direction we’re headed and we’ve been pursuing that vision. We identified milestones, we indentified road maps, and therefore we created what is called the universal medium term great plans. That for us is a plan to achieve that vision all of us subscribed to.

We also agreed on core values. These values will guide us, they will serve as guide posts as we try to accomplish shared vision. So, these are the three important things I’ve done, one is team work, the other one is openness and transparency and the third is shared vision. These three have given us the results the whole world is celebrating today.

There were three major challenges. The first challenge is the public perception of NIMASA as a very corrupt organization. We had to rebuild that by rebranding and working very hard to convince the people that we’re not who they made them to believe we are. The second one is that we met a demoralized work force.

I was going to ask, sir, how you were able to depoliticize NIMASA because I know that was a major issue with the agency at the time you came in. And anyone who’s been following you closely would know you’ve been trying very hard to make sure people can draw the line between NIMASA as an agency and the politics of Rivers state. Tell us, sir, how have you deal with this?
I’m a politician, but I don’t mix politics with national service. I don’t use national service to play politics, that is important. I’m legacy minded. What I mean is that I know that I will give account of all I’ve done, not just today, but in the future.

I will give account in posterity and that’s important. So, having that background, that someday I will be called to give account of the mandate of the Nigerian people encoded in a Law passed by the National Assembly, and I accepted that power on behalf of the Nigerian people, not on behalf of a political party. You need to separate the two. I’m not the strongest man in the land, it’s just that I’m backed by Law passed by the National Assembly.

Whenever you speak passionately about NIMASA, people see a man with sincerity, a man with integrity, that’s not something everyone will agree is common with people who hold positions as powerful as yours. What part of your background, sir, prepared you for this humongous responsibility?

Three important things prepared me. One, my parents never compromised on integrity. They were not very rich people, but they were comfortable. They never at any time compromised on integrity. Two, I have a mentor who also will never compromise on integrity, I won’t go more than that. The third one is that, over time, I had my own experience, my religious experience that made me realize that someday all of us will give account to the Almighty God and that’s very key. Then, finally, over time, I’ve realized that so many other things are transient, but a good name will endure.

The 3 Things I Did To Revive NIMASA In 2 Years •DG NIMASA, DAKUKU PETERSIDE was last modified: March 26th, 2018 by Seye Kehinde