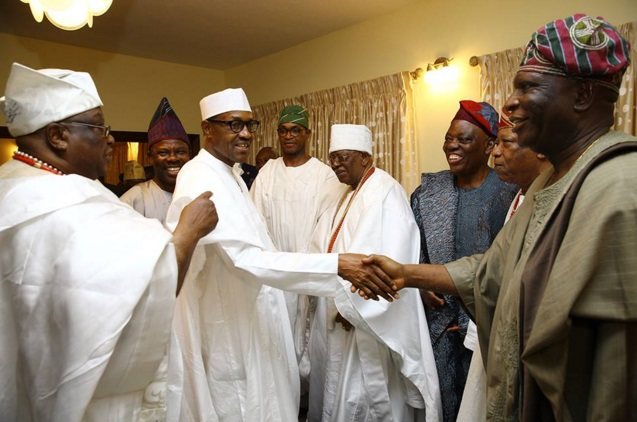 Do you know that the fate of who will emerge as the next Ogun State governor is in the hands of about 6 Big Players in Ogun State? That is the gospel truth and we can  tell you that authoritatively.

City People  can reveal that apart from the grace of God, who ever will emerge eventually will need to enjoy the support of one, or some of these key stakeholders.

Who are they? They are Gov. Ibikunle Amosun, who is in firm control of  Ogun APC, former President, Olusegun Obasanjo who is an influential political player in the state. Many people have learnt the bitter lesson that if you ignore OBJ in your calculation it is at your peril. Even if he doesn’t support anyone one he can become a stumbling block if he so chooses.  There are others like former governor, Otunba Gbenga Daniel who still has a firm grip of his OGD political machinery intact. There is also Senator Buruji Kashamu, the strongman of Ogun politics who has come to be seen as a cat with  9 lives. Although he is currently battling his US drug problem  he has a formidable group called Omo Ilu Foundation Buruji has for the past 6 years been running Ogun PDP. Until the Ladi Adebutu faction took him on.

Others are the Awujale of Ijebuland, Oba Sikiru Adetona who though not a politician is influential and well connected. He is silently rooting for an Ijebu candidate. He supports Otunba Bimbo Ashiru’s bid and also Senator Mustapha from Ijebu-Igbo

His wish is to have an Ijebu son from his part of Ijebu become the next Governor.  There is also former Ogun governor, Aremo  Olusegun Osoba who 2 years ago left for SDP but is now back to his  Ogun APC base. He has his cards close to his chest. There is Sir Kessington Adebutu alias Baba Ijebu. He is also very, very relevant in the scheme of things, politically. Though, he does not belong to any political party he has friends in all the parties and he is quite influential politically. He also has a deep pocket and a war chest that only a Mike Adenuga can match. His son is running.

How will these men determine who emerges at the end of t he day? We can tell you. Amosun has a warchest, that is intimidating that he plans to deploy to fund operations. He  has the party machinery and the federal might in his favour. He is close to Pres. Buhari. Though no one knows who he wants to use, the believe is that whoever he favours will enjoy all these advantages, as the person has a readymade political machinery.

Aremo Olusegun Osoba who many believe is working closely with  APC National leader Asiwaju Bola Tinubu. Although, some  erroneously  believe that since SDP didn’t win in Ogun in 2015 Osoba was no longer relevant in the scheme of things, City People gathered that  the Egba and Ijebu highchief is seriously digging in to hijack the party machinery and effect a change at the governorship election in favour of his candidate. The believe is that Osoba and Tinubu are working together and Tinubu is building his machinery in Ogun State around Osoba.

The believe is that both Osoba and Tinubu are backing Senator Solomon Adeola popularly called YAYI.

How about Buruji? With last week’s US judgement his political fortune seems waning and it appears he is fast losing grip of political influence in the state. There are those who say Buruji will most likely be neutralized by Amosun. They are close through both are in different parties.  Some others say Buruji is also trying to run for governorship or support a popular candidate.

An insider says Amosun is battle ready for 2019.

Some say Amosun may be looking for a successor in Tolu Odebiyi, his new Chief of Staff (and son of late Jonathan Odebiyi, 1st and 2nd Republic Politician.

He was a Yewa politician, Senator, and Activist.  They say it might turn out to be a decoy too.

Some see the move as a ploy to bring him closer to government; understudy the political operations and intrigues, at the same time empower him for the game ahead.

There is also Giwa Biodun Onanuga, (NUGACON) a successful real estate player and husband of current deputy governor of the state. Since his wife went into politics a few years back, he has taken an active interest in APC politics in the state. He is from Ijebu-Ode where he is a Otunba Abimbola Ashiru’s name has been mentioned. He is the current Commissioner for Commerce in the state. He is a close associate of the governor and one of his core loyalists from the popular Ashiru family in Ijebu-Ode, Otunba Bimbo has the full backing of the Awujale of Ijebuland.

Omo Majemu Reveals 2017 prophesy, Says Many Young Ladies Will Be Used For Ritual”,