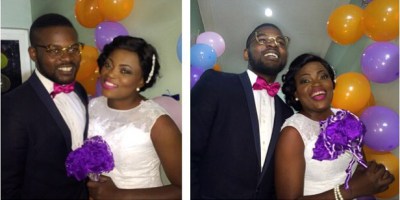 We love love, even when its make-believe. Sometimes our favourite couples exist only in the illusion of the television shows and movies that introduced us to them and we are fine with that. Why? Because they have chemistry for light years and that is something that we will always be here for.

Although #TheEveMovie is not out yet, Beverly and Adeolu already have us ‘awwing’ from the trailer and dreamy pictures from the movie. The two actors are sure to bring all the fire and sparks to the movie when it hits the big screens later this month.

Skinny Girl In Transit fans know deep down in their hearts that #MoSha is one of the main reasons they come back episode after episode. Although the couple is fictional as far as we know, Timini and Sharon don’t leave their picture-perfect couple goals on the show. The duo have been spotted at a number of events serving too much cuteness for us to handle, to be honest.

Rita Dominic and Femi Jacobs got us in our feels and left us there when they played hubby and wifey in ‘The Blind Spot‘. While the two actors have been linked together in the past, their chemistry in front of the camera is undeniable.

Possibly the funniest couple on this list, trying to keep a straight face when Falz and Funke are on screen together is a near impossible task. The Jenifa’s Diary actors draw from each other’s energy in the most organic way and we never get tired of it.

‘This Is It’, is the onscreen home of Nollywood sweethearts, Chiagoziem Nwakanma and Nick Mutuma. The sincerity of their romance is as relatable as it is entertaining.

Speaking of relatable and entertaining, Abimbola Craig and Ayoola Ayolola’s characters in Skinny Girl In Transit are another pairs of Nollywood’s favourites. Drama coated with a lot of sweetness, these two are an absolute joy to watch.

The intensity between Ini -Idima Okojie and Nonso Bassey on Africa Magic’s ‘Battleground’ is the stuff great TV is made of. Seamless but well thought out, dramatic but well played out.

Way before any of us knew that a real-life wedding party was in the making, Adesua Etomi and Banky W stole our hearts in the first instalment of Kemi Adetiba’s ‘The Wedding Party’.

8 On Screen Couples That Have Incredible Chemistry was last modified: March 21st, 2018 by Igbokwe John