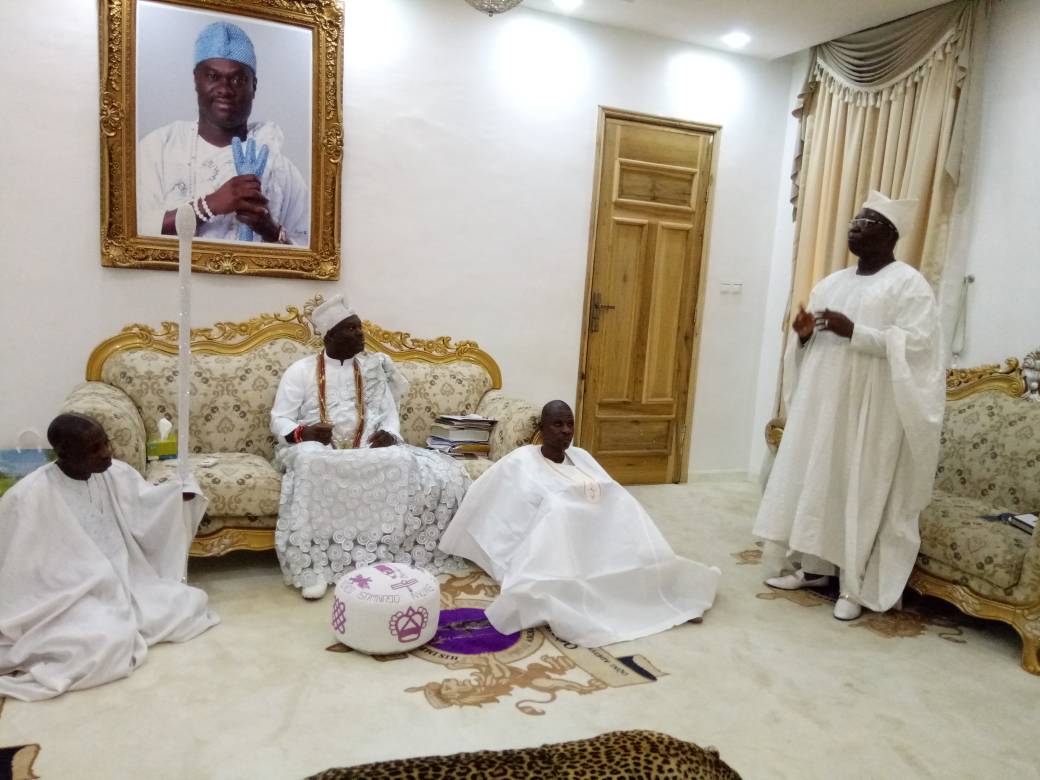 The Ooni of Ife, His Imperial Majesty Ooni Adeyeye Enitan Ogunwusi Ojaja II on Monday played host to the new Aare Ona Kakanfo of Yoruba Land, Otunba Gani Adams urging him to use his new position to right the wrongs in Yoruba land, and described him as the right choice for the position.

Ooni of Ife made the submission during a historic visit by the 15th Aare Ona Kakanfo to him at his Ile Oodua palace in Ile Ife.

Congratulating the Aare designate, Ooni Ogunwusi applauded his choice and prayed that God empower him  to carry out the work assigned to him for the Yoruba race stressing that there is no doubt his choice is as a result of his antecedent as a fearless fighter for the emancipation of Yoruba interests by peaceful means.

The African foremost monarch added that partisan politics has destroyed so many things, descAare Ona Kakanfo is a warrior who has a big role to play in the emancipation and unity of his people, hence the importance attached to the title .

According to the Arole Oduduwa, the title is not a social chieftaincy title, but one with robust traditional background and expectations.

The Ooni who prayed for the new Aare that ” God will continue to uplift you” explained that even though Aare Ona Kakanfo is a warrior, the “war he has to wage this time is the war for the unity of Yoruba land which you have been propagating before and you should do more.”

The Ooni said yorubas are front runners and urged the Aare to ensure the race remain a frontrunner.

“The Aare Ona Kakanfo is deep and its importance known mainly to the elders.

” Use your tenure for good, embrace both the natives and strangers among us.

” Rely on God and He will help you” the Ooni concluded.

Otunba Gani Adams in short speech said he deliberately decided to make Ooni’s palace his first place of official visit since his proclamation as the 15th Aare Ona Kakanfo, because of the sacred uniqueness of the throne, the value he attaches to Ile-Ife as his place of origin as a yoruba man and cradle of the Yoruba culture.

The Aare said the unity of the Yoruba race remains Paramount to him as he is ready to join the Ooni and the other traditional rulers of Yorubaland in ensuring peace, unity and progress for the race.

Thanking the Ooni for his previous support, he also sought the monarch’s further support to enable him make a success of his new assignment for the Yoruba race even as he promised to further promote the Yoruba culture.