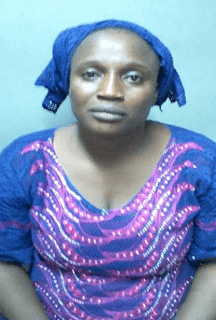 Justice B.O. Quadri of the Federal High Court Abuja has sentenced a 55-year-old female pilgrim Binuyo Basirat Iyabo, caught last September smuggling 76 pellets of cocaine weighing 931 grammes to Medina, Saudi Arabia to ten years imprisonment with hard labour with effect from yesterday., March 1st.In his judgement delivered on Monday, February 27, 2017 Quadri said that the sentence will serve as a deterrent to others. Besides, he lambasted the convict for not revealing the identities of her sponsors.

NDLEA commander at the Abuja airport, Hamisu Lawan said that the convict hails from Irepodun local government area of Kwara State. She is married with three children and a trader at dosumu market, Lagos. In her statement to the NDLEA, she agreed to smuggling the drugs for a fee.

“I am a trader in Lagos, married with three children. I wanted to expand my cosmetic business but I have no money. My sponsor offered to foot my expenses to Saudi on pilgrimage. I was excited until I was asked to take drugs along. I wanted to decline but considering the offer of a million naira, I accepted. I swallowed the drugs in Lagos and took flight to Abuja on my way to Medina but I was caught in the process” she stated.

“The war against drug trafficking in Nigeria is on course. Stopping the woman from going to Saudi with the drugs was highly commendable and the punishment is right. No drug traffickers shall go unpunished” he stated