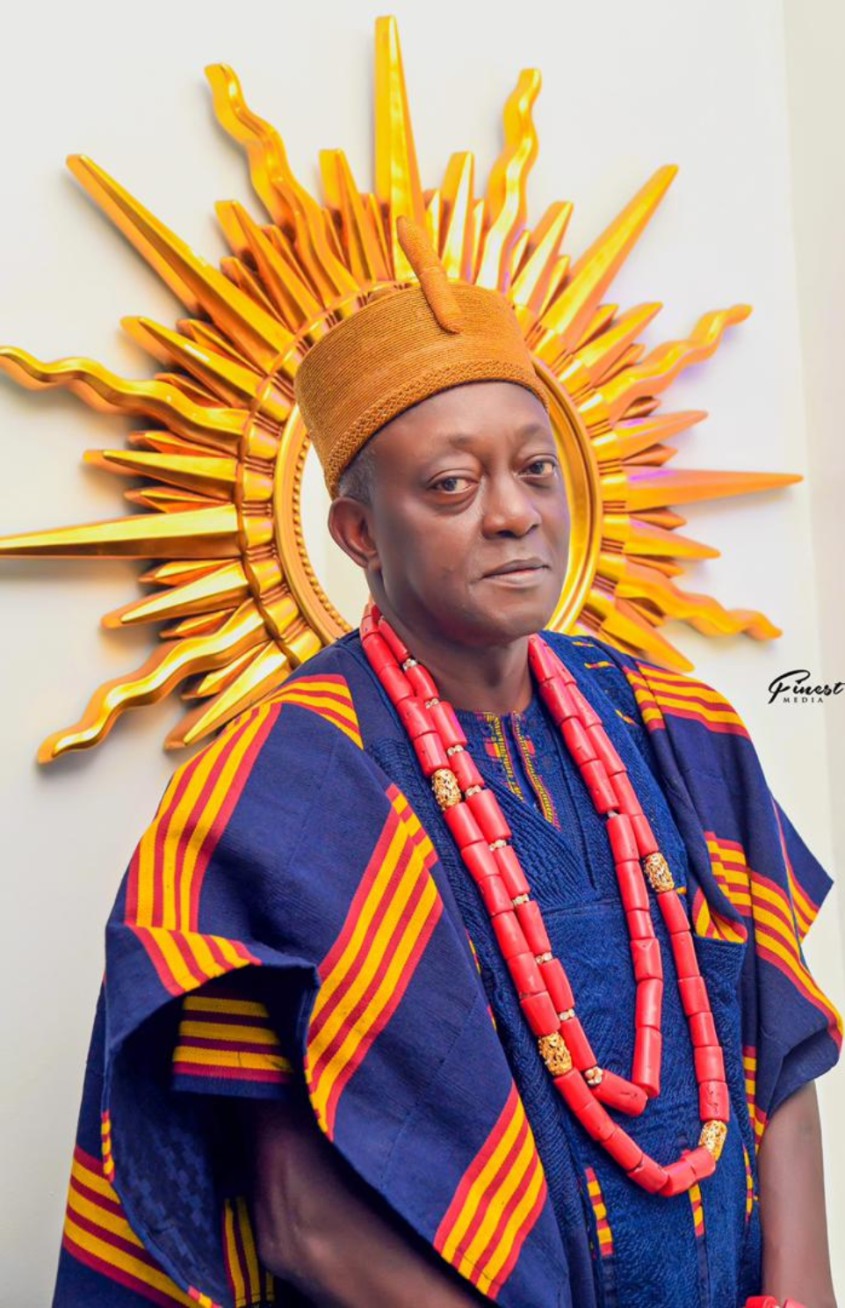 •Holds Classy Party To Mark It

The Palace of the Agura of Gbagura Kingdom became a mini-pilgrimage centre on Saturday, August 21, 2021, as top government functionaries, politicians, royal fathers, businessmen and women, socialites, society women and corporate individuals stormed the ancient town of Abeokuta, Ogun State to celebrate the second coronation anniversary of Oba Saburee Babajide Bakre who mounted the throne of his ancestors this time two years ago.

The event was very classy for one major reason amongst several others; the Agura of Gbagura couldn’t hold his first coronation anniversary because of the ravaging effects of the COVID-19 pandemic in 2020. Now that the effect of the pandemic is gradually easing off, men of timber and calibre gathered in their numbers to felicitate with his royal majesty.

The week-long event started on Tuesday, August 17, 2021, and ended on Sunday, August 23rd 2021. Some of the activities that made the event memorable included the visit of the friends of Agura, prayers by Christian and Muslim clerics, presentation of gifts by the friends of Agura. They presented very expensive furniture to Kabiyesi while the towns under Gbagura jurisdiction also came to pay homage to his royal majesty.

Jumaat service was held on Friday, at the Gbagura Central Mosque while the main event of the anniversary held the next day. On Saturday, the Agura Statue at the Agura Road Junction, Ago Ikaa was commissioned while new chiefs were installed to mark the new reign of Kabiyesi.

Let’s quickly tell you that Oba Bakre also honoured some prominent Nigerians at the event. Over 15 individuals went away with different chieftaincy titles. Names like the popular Wale Saranda of Lagos and his beautiful wife were among those that bagged titles in Gbaguraland.

City People’s Brands Editor, DAMILARE SALAMI 08155134152 and the head of photography unit, Femi Adeleke were in Abeokuta to cover the event and in this report, they bring you juicy details and beautiful pictures from the classy owambe party, enjoy.

Egba Gbagura is one of the five sections of Egbaland, the others being Ake, Oke-Ona, the Owu and Ibara (historically, Ibara is part of Yewa (Egbado), not Egba, although it is located in the present-day Abeokuta geographically). It is a traditional state which joins with its bordering sections to form something of a high kingship. The Agura of Gbagura is the traditional ruler of this subsection of the Egba, and under his jurisdiction are the rulers of the 72 townships that each bears the title of Baale. Though the Agura is technically in equal power to the Alake, however, since the colonial era, the Alake has been considered to be the supreme leader of all of Egbaland, not just the Ake section.

The Egba people originally lived in the Oyo Empire until an Egba, Lisabi, organized a revolt against the Alaafin of the Oyo Empire. Lisabi is therefore considered the father of the Egba people. Abeokuta was founded as a replacement for Orile Egba in around 1830 by the Egbas after the collapse of the Oyo Empire during the civil war. The city was founded because of its strong defensive physical position by refugees trying to protect themselves against slave raiders from Dahomey, who were trying to benefit from the war. The Gbagura people were specifically lead to Abeokuta by Balogun Ojo of Gbagura.

The Egba Gbagura, along with the other 4 groups who founded Abeokuta, avoided crowning kings until 1870. This was when the Gbagura appointed Jamolu as the first Agura of Gbagura. The Gbagura section of Nigeria originally included 144 townships scattered all over Yorubaland stretching all the way to modern-day Ibadan. 72 of these towns rebelled against the allegiance of the Agura and later joined the Oke-Ona section of Egba. Towns under the jurisdiction of the Gbagura include Wasinmi, Iddo, Ilugun, Ilawo, and others. Each township brings a chief who serves alongside the Agura and the rest of the kings of Egbaland, and in the Ogboni of Egbaland, the supreme legislative council of chiefs. The township of Iddo is the only township that can produce an Agura. The village of Wasinmi produces the Odafin of Gbagura Egbaland, a member of the Ogboni.

Oba Saburee Bakre and his wife needed no introduction during the procession. He stood out from among other royal fathers. Kabiyesi and his wife were dressed in radiant brown and orange Aso-Ofi. This attire not only suites the event, it also fits the Kabiyesi and his Olori so well. They looked like a young couple that is just getting married in the traditional way.

BALOGUN OF OWO OPENS THE FLOOR

The event started with an open prayer in the traditional way that was taken by the Balogun of Owo kingdom, Chief Lateef Idowu who prayed for a peaceful and beautiful day. His prayers were confirmed by showers of blessings that greeted the Gbagura’s palace just shortly after the event commenced.

Shortly after the event started, one of the foremost sons of Egbaland and former military and civilian president, Olusegun Obasanjo known widely as OBJ stormed the event in style. The presence of OBJ was highly recognized because he is not just a former national leader; he is also a traditional chief in Egbaland. He occupies the prestigious seat of the Balogun of Owu kingdom in Egbaland.

The first couple to be anointed with the new Gbagura chieftaincy title was a foremost real estate mogul, an accountant of high repute and a popular businessman who has bagged many other titles; Otunba Yemi Lawal. He became the Oganla of Gbagura kingdom while his beautiful wife became the Yeye Oganla of Gbagura. Otunba Lawal and his wife after the title took time to have a photo session with some of the royal fathers at the event and the former president, Olusegun Obasanjo.

DID YOU SEE THE ROYAL FATHER’S CORNER?

Oba Saburee Bakre is a first-class Oba who attracts men of his kind. The event was not just a display of affluence; it was an avenue for proper contact and connections. Many Royal Fathers came around to show their love for Oba Bakre. Traditional Rulers present at the occasion included the Alake and Paramount Ruler of Egbaland, Oba Adedotun Gbadebo, represented by Chief Sikirullah Atobatele, Balogun of Egbaland; Oba Fatai Akamo, the Olu of Itori; Olu Owode, Oba Sowemimo; HRM Oba (Dr) Adeyemi Adekeye, Abepa Of Joga-Orile, Yewa North High Chief Akeem Olabode Mustapha, the Osi of Egbaland among several others.

Anyone present at the event would notice that the new Sobaloju and Yeye Sobaloju of Gbagura kingdom, Chief Afolabi Sodunke and Chief Mrs Olasumbo Sodunke who stood out among the crowd at the event. Something outstanding about them was their attires. Customarily, Afo Guarantor stunned in his complete Agbada outfits with his beautiful to-match shoes. And his wife, Chief Mrs Sodunke whose fashion style left tongues wagging was very much active from the beginning to the end of the event.

If there’s a group that came so conspicuously, it was the lemon colour cap and gele gang. They were the friends, colleagues and associates of the popular Lagos socialite, Otunba Wale Saranda. Chief Adewale Adesina and his wife, Chief Mrs Temitope Asabi Adesina were among those who bagged new chieftaincy titles in Gbagura. Oba Bakre honoured them with the titles of Apogunpote and Yeye Apogunpote of Gbagura land.

TOP GOVERNMENT FUNCTIONARIES CAME THROUGH TOO

I Caught My Lover In Bed With My Sister! Now He Wants To Marry Me!