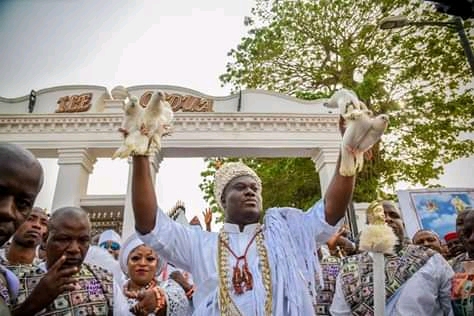 The Arole Oduduwa & Ooni of Ife, Ooni Adeyeye Enitan Ogunwusi Ojaja II, has urged Governments at all levels to raise the standard of living of citizenry through favourable economic policies.

Ooni, the Co-Chairman of National Council of Traditional Rulers of Nigeria (NCTRN) gave the charge during the 2020 edition of the annual celebration of Aje Festival at his Ile-Oodua palace, on Monday in Ile-Ife.

Ooni Ogunwusi who is the natural father of the entire Yoruba race worldwide decried the current economic condition of the country which he described as pathetic, adding that the country’s wealth must be be enjoyable to all Nigerians.

“As it stands today, Nigeria has a population of few men and women controlling the economy while countless others are languishing in poverty. We cannot continue like this.

“For us to progress as a country, we must ensure that our wealth goes round especially to the poor and other vulnerable members of the society. We cannot keep having strikingly rich few Nigerians and uncountable ones wallowing in abject poverty.” The Ooni decried.

While explaining the basis for the Aje Festival celebrations, the African foremost monarch explained that it is a unique way through which the Yoruba people globally remember the deity which is known for wealth and riches.

“Aje is a deity which is known for wealth and riches. Its annual celebration as you have witnessed today is to acknowledge its relevance to us as people, especially its indispensable nature to us.

“Did you see the struggle for it during the procession to and from the Aje temple? That is the spirit of Aje, all of us are not rich because it is not easy to accumulate wealth.

“We are not devaluing the currency by spraying it to our people, we only do it on a special day like this to spread happiness. In the olden days, it was cowries, sometimes ago it was coins, nowadays it is naira notes and we hold it in a very high esteem.” The Ooni noted.

Coordinator of Aje Festival, Princess Toyin Kolade while briefing newsmen expressed happiness for the massive turnout of participants from within and outside Nigeria. She thanked the Ooni for the opportunity, pledging her commitment to the development of the prestigious Yoruba cultural heritage.

Similarly, the Lowa Adimula of Ife, High Chief Adekola Adeyeye, described the 2020 Aje festival celebration as the best in history, thanking the Ooni for uphold the cultural values of Ile Ife and Yorubaland. He added that the Ooni has rebranded the ancient city positively to the world, praying that God Almighty will support him in realising the greater Ife Kingdom of his dream.

Speaking on behalf of the international participants, Mr. Rodrigo Abdon from Brazil described the festival as awesome representation of the African rich cultural heritage.

“What I see here today has further represented the economic potentials of the enviable Yoruba cultural heritage and Africa at large. I see arts, I see dance, I see music, I see paintings and many others like we have in Brazil. The people are also receptive, very accommodating and it shows the good nature of the land. We are really feeling at home”Mr. Rodrigo noted.