AKIN AYEGBUSI POSITIONED TO RESTORE THE PRIDE OF EKITI 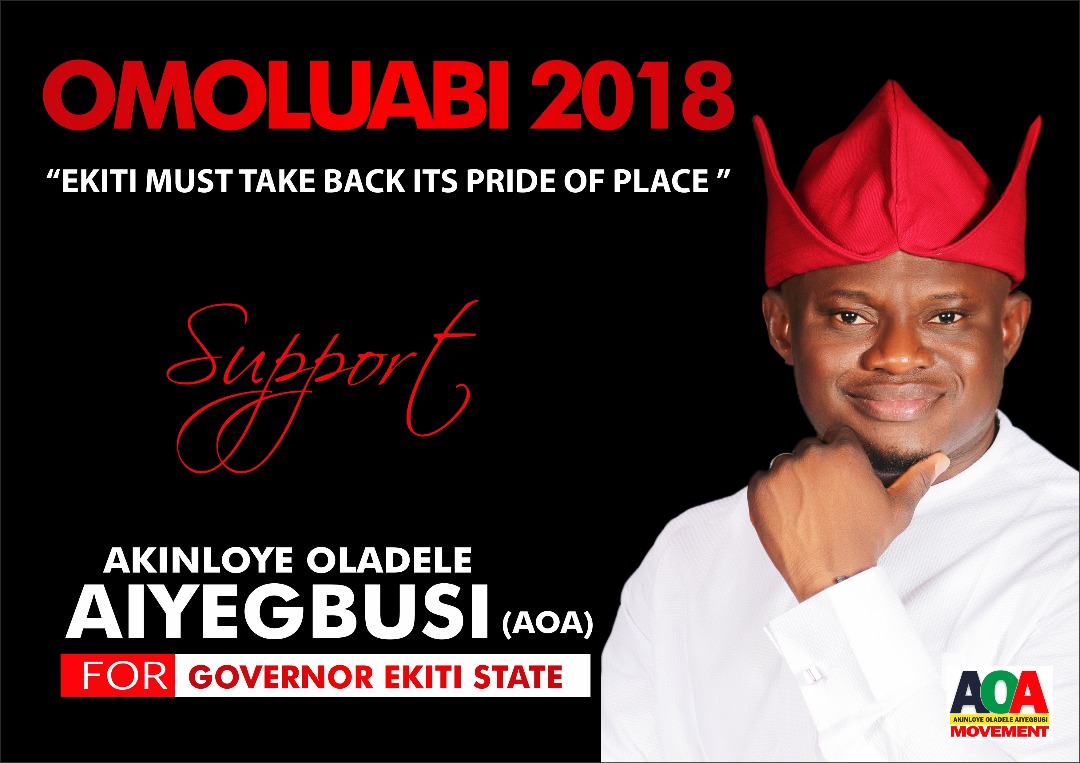 In a bid to restore the pride of the historic Land of Honour and Integrity, Ekiti State, the progressives from the popular party, Social Democratic Party, SDP, is flagging off a son of the soil and one of the trailblazers in the state, to reclaim its glorious and enviable pastime from the clutches of politicians who have ‘pillaged’ the resources of the state over the years.

Akin Ayegbusi is a resolute and articulate crusader, who has been proven to be a senior advocate of the masses, with credible moral, technocratic and political credentials. What’s more? He is a youth,

Akinloye Ayegbusi was born on 21st September, 1974 in Itapa Ekiti, the kingdom of Owatapa. His parents were Samuel Olabiyi and Comfort Taiwo Ayegbusi. His father studied a branch of Engineering for his First degree at the University of Ibadan; he later added a Master’s Degree from the University of Lagos, and later retired as General Manager of Ekiti State Water Corporation. His mother became a respected teacher. They were both determined to set their Son on a higher pedestal. His parents were very strict disciplinarian.

Akinloye Ayegbusi had a very tough regimented early life. He started his life early in school at the Army Children School, Comilla Barracks 44, Kaduna where he had his Primary School education between 1978 and 1984. He attended St. John’s College (Now Rimi College) in Kaduna.

In 1991, Akin Ayegbusi was admitted to the prestigious Ahmadu Bello University, Zaria (ABU), Zaria to study B.Sc. Accounting. He could not commence studies until two years later as the institution experienced frequent disruption of academic activities.

While waiting to commence his Degree Course at ABU, he contemplated the option of becoming a soldier. This dream never came to pass as his admission into the Nigeria Defence Academy (NDA), Kaduna never worked out.

Ayegbusi was once the Senior Prefect of his Secondary School. He was a prominent member of the International Association of Students in Economics and Commercial Sciences (AIESEC). He headed the Local Organising Committee for all the Associations’ activities.

Ayegbusi was a Student Union activist. In 1996, he was in the thick of things when the National Association of Nigerian Students (NANS) organized a protest against the tyrannical dictatorship of Late General Sanni Abacha’s Military regime. Ayegbusi was also in the Christian Fellowship all through his University life. Specifically, he was a staunch member of Full Gospel Businessmen’s Fellowship International.

In 2004, he bagged his Master’s Degree in Business Administration. He has also attended several International Courses/Conferences.

Ayegbusi did his NYSC at United Bank for Africa (UBA). Later, he got a job at Diamond Bank. After five years, he went to Stanbic IBTC where he started investment banking he has been practicing this for the past 12 years. At Stanbic IBTC, his team structured the financial transaction for the Lekki-Epe Road from start to finish. In running his office as Governor of Ekiti State, he intends to key into this arrangement to transform Ekiti State.

AKIN AYEGBUSI POSITIONED TO RESTORE THE PRIDE OF EKITI was last modified: June 2nd, 2018 by Reporter

Where Are These 60 IBADAN Society Women...