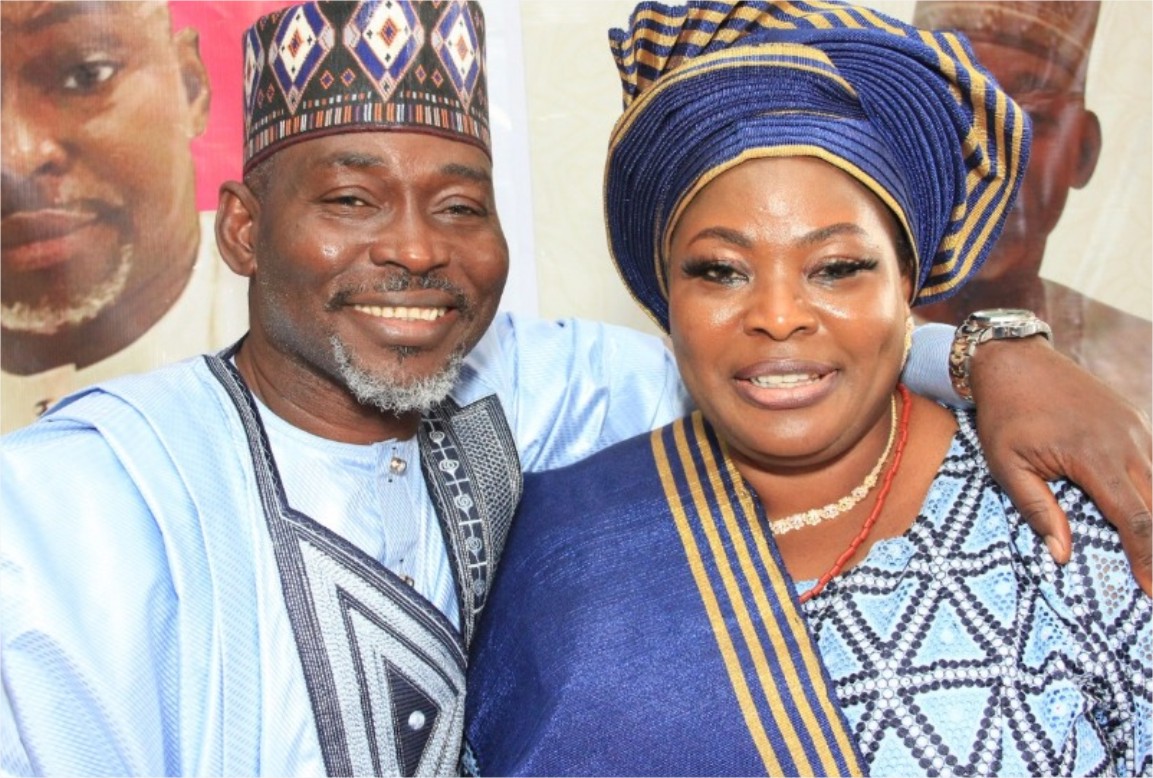 Last week, Alhaji Surv. Kareem Abdulrahman, a husband, father and teacher for many celebrated his 55th birthday in style.

The M.R.A Hall, inside Magodo Phase II Estate in Lagos, hosted some of his family members, friends, associates and loved ones to a grand party where there was more than enough to eat, drink and toast to. It wasn’t just a party as usual but a time for the celebrant to look back and give thanks to God for taking him this far in life.

City People’s Brands Editor, DAMILARE SALAMI (08155134152) was there with Senior Photojournalist, Abdulrasheed Sanni and in this report, he brings you all that went down, enjoy.

Alhaji Surv Kareem Abdulrahman was born Oshodi Lagos into the family of Alhaji Eneji Abdulrahman and his wife. He started his education in 1972 at Methodist Primary School, he had his secondary education at both Baptist Academy and Ikeja Grammar School Lagos in 1984. He gained admission in 1985 to study surveying at Yaba College of Tech, in 1990, he proceeded to the University of Lagos Unilag to continue his education; he graduated with BSc. Hons in Surveying Department.

He served his country as a Corp Member in Cross River State. After his postgraduate, He started his career with Geocite Nig LTD Warri, an oil rig firm, from there he joined the Nigerian Mapping Company; the company that took a major part in the mapping of our country Nigeria. In that capacity, he took part in major power stations, dams and other notable surveying works, oil explorations etc.

He was a sub-consultant to Lagos State surveying department and also in Ogun State for Opic Ogun State Properties Invest Corp, he floated his own company in 2002 Spacemark Data Ltd and has been working and consulting for private organizations, individuals, government institutions, and international organizations. He executed numerous and laudable projects from telecommunications, government projects, and private institutions both in Nigeria and overseas.

He is happily married with beautiful children. He’s a devoted Muslim and a socialite. He performed his first pilgrimage in 2007 and many times.

All Shades of Blue Rule The Day

Be it sky, royal or navy, all shades of blue was the colour of the day and it indeed beautified the well-decorated auditorium. Men and women from different walks of life came one after the other to felicitate with Alhaji Abdulrahman who was full of smiles from the beginning of the event till the very end.

Fast-rising comedian, Jimbaba Olayinka is a multi-talented personality.  He is a comedian, musician, dancer, actor and strategist. he could be best described as fun and loving to be with. he was the host of the emerald celebration party of Alhaji Abdulrahman. Did he do well? That would be an understatement. His performance was excellent. He carried his guests along well and also made the event fun for all the guests. Moving from one table to another, JimBaba made the event so participatory for all his guests such that many people had known his name before the end of the party.

Joined by his wife, mother and children, Alhaji Abdulrahman’s entry into an already filled auditorium was epic. He was welcomed by beautiful tunes that were being dished by the live band. Let’s quickly be the first to tell you that Surveyor Abdulrahman is a great dancer. He showed his dancing skills as he approached his reserved celebrant’s space. It was a beautiful moment for him and his family indeed.

He may not look it but fast-rising singer, Omotola is an untapped talent. He was on the bandstand with his band members and he delivered big time. At some point, guests were forced to ask if the late Dr Orlando Owo was invited. He had the voice of any legendary Nigerian music artiste you can ever think of.

HAJIA Aisha Olutayo Abdulrahman the celebrant’s wife is the CEO of Takara Farm Market situated at Awesome Grace Plaza, Bashiru Shittu Magodo Phase II, Ikosi Ketu Lagos. She was the brain behind the classy party that was held in honour of her darling husband. She made sure that everything was well planned and executed. All the vendors she employed were top-notch. She would have made it as an event planner if she decides to pick that up as a career.

…And it’S A Buffet Something

Unlike at some events where guests decry the performance of food vendors and caterers as well as waiters, this party was a buffet dinner. Everyone had what they wanted and the quantities they desire. It first started with the first course of fish pepper soup and bread before other Nigerian delicacies were introduced.

Engineer Orija came to the event with his beautiful wife. He was dressed in royal blue agbada, the same as the celebrant. You can tell that he is a good friend of the celebrant. He was among those on the VIP seat. When duty called, he was required to anchor the toast. He described the celebrant as a man with a heart full of love. Therefore, he requested that love be spelt before the cutting of the cake and a toast to many more years.

Yes, there were good dancers at the event as much as there were beautiful ladies. Two groups that stood out were the Anayamba Sisters and Golden Ladies. They were the friends of the wife of the celebrant, Hajia Aisha Abdulrahman. They all proved how well they could dance when they were invited to join the celebrant on the dance floor.

Lagos Surveyors Too Were Present

The members of the Nigerian Institute of Surveyors, Lagos branch were also present at the event to felicitate with a strong member of the association. They also booked their spot on the dance floor and eventually became the life of the party when they finally had their space. As the Omoluabi Ogo dance was busy delivering their favourite tunes ranging from Juju to Fuji and tungba, the surveyors were busy dancing and raining cash on both the celebrant and the band.

Ndia UDEE was the food plug at the event. This catering outlet is known for the quality, the freshness of the meal and most importantly, nutritional value. All these were experienced by the guests of Alhaji Kareem Abdulrahman during his emerald jubilee celebration. Oh Yes foods was in charge of small chops and cocktails while OPS Max security manned the gate and event doors for maximum security of guests.

How I Have Sustained The ADAM & EVE Brand For 24 Yrs – CEO, MODUPE OGUNLESI

How Olofin OF ISHERI Reached Out To...