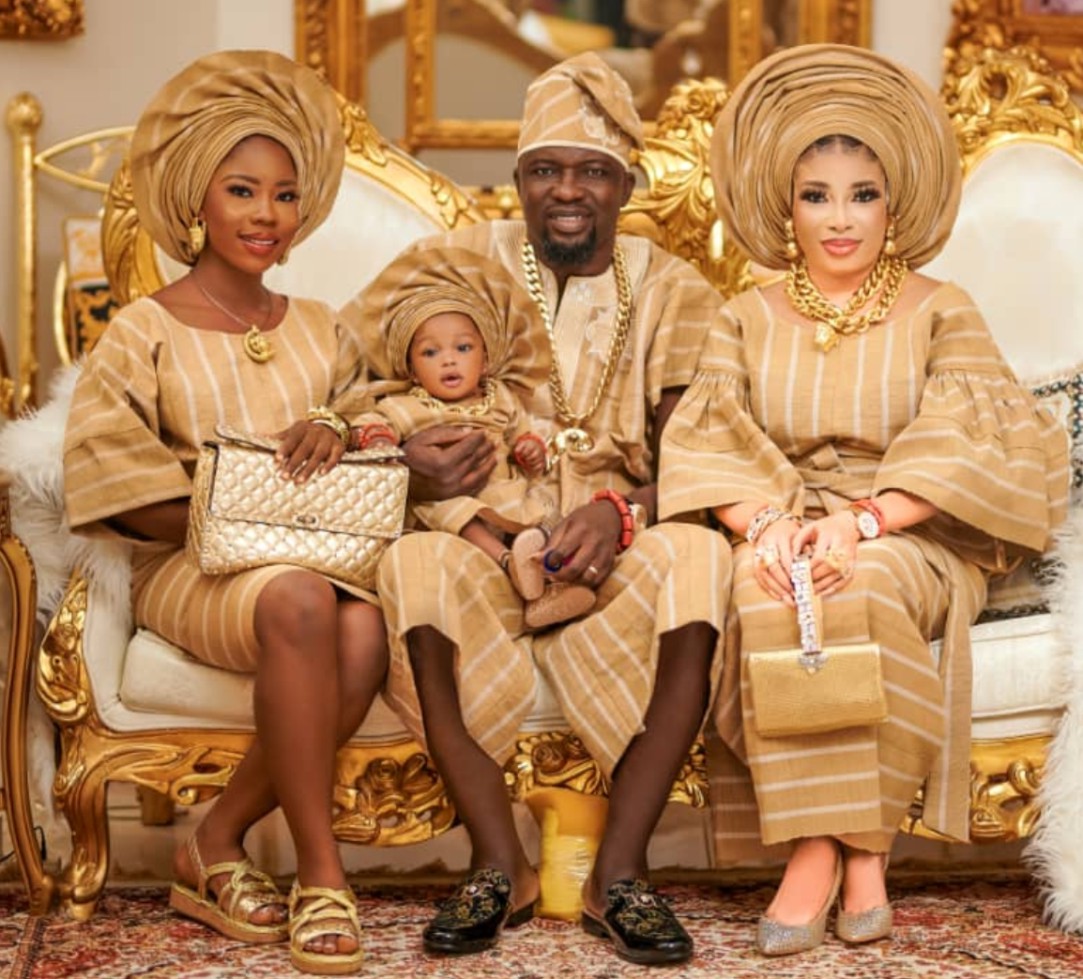 Getting Star Actress, Liz Anjorin and her husband to sit for a marathon interview was tough. We had requested the interview since the beginning of this year. We wanted to get the couple to reveal how it has been living together, as husband and wife and how they have survived all the attacks that have come their way, from haters on social media. It has been difficult because both have been travelling. Along the line, she travelled abroad to deliver her baby.

So, when last week, Liz agreed to talk to City People, we grabbed the opportunity with both hands. The couple ushered us into the luxurious comfort of their Lekki/Ajah home. They live in Opulence and Luxury, inside the estate where they live. Their garage was filled with all kinds of exotic cars and jeeps, and the building interior looked so beautiful and expensively furnished. All the furniture and decoration gadgets were imported and she gave the interior an Arabian-style touch, with a scented candle releasing a sweet-smelling aroma that added to the beauty. After a few minutes of exchanging pleasantries with Liz, her husband, Alhaji, came down to join us. He was dressed in a designer Teeshirt and pants to match. He also wore designer slippers and took his seat beside his wife, after which the interview commenced. Alhaji requested that we should allow his wife to answer the questions in the main and that he will only chip in his comments when need be. We agreed.

By the time the interview was over, we had grilled her so hard that we didn’t know we spent close to 2 hours. Below are excerpts of the interview.

How has your marriage been since you settled down with your husband?

So far so good, it has been nice. It’s a journey of 2 personalities. I have my own life and he has his own life too. We have our ups and downs, but we are focused. Happiness is not something you can buy in the supermarket. You create it by yourself. So far, so good, the man I got married to is a wonderful man. You have known both of us for a very long time. Though, like I said there has been ups and downs, different attacks from people out there, but it’s normal, that is life for you especially from the Yoruba sector.

How did you take all the controversies that came at that time?

I am used to it. I enjoyed it, I loved it. It shows that I am doing something unique, if controversies don’t pop up then I am no more a celebrity. As a celebrity, no matter how high you are when you get married, there is a tendency for you to slow down or crash. That is the norm for any celebrity, no matter how powerful you are, but not in my case anyway, and that shows that I got married to the right person. He is also a superstar on his own and I am a superstar (laughs). When we got married, Alhaji was very much single, he was staying alone and I was much single as well. Though I was contemplating if I should marry him or not, at a point, I remembered I promised him that if I make it, I will come back and marry him. At that point in my life, even though, I was really of age to marry, but as a smart woman, I had to think it through. As of then, my level is not about money, though I need money. But this man in question can give me money. And as a career woman, if you have rest of mind, you will make more money.

So, I was pleased with him and I knew he is my husband. Things that happened with other women are normal, though they came as a shock. Some people are happy about it, some called me to express their mind on how happy they were, that I got married to Alhaji.

But definitely, there is no how everybody will be pleased with you, and that is very normal. The difference between Alhaji and I is that some women came out, in my own case some men who wanted me to marry them at all cost were paying bloggers and journalists to destroy the marriage so that I can come back to them. So, I know some facts and he knows some facts too, but fans, some people out there, don’t understand what is going on, some of them will just conclude, especially on social media.

As a celebrity, you are out there, and your secret is not safe, there are some lies that will be flying around, and it’s a must you must come up and debunk something, but I realised that Yoruba settings don’t want it that way, they just want to follow the lies blindly, because it suits them. It helped some of them to clear their depression. They derived so much joy in some people’s downfall, tears or pains. But one thing they forgot is that social media is like death, everybody shall taste it. So, whatever they are doing on social media doesn’t move me, the only person I have issues with is my husband, and for the fact that I got pregnant on my wedding night. Yes, I got pregnant on the night of my wedding. We discovered it after 3 months even though we had an initial plan then.

We went for a check-up and the doctor said: “Alhaja, you are pregnant. I was like wow? God is great. Even though I was thinking of so many things; my age, my health, and all that. I gave birth to my 1st daughter at age of 19/20. I was happy at that moment, but when we got home I was giving it a 2nd thought. But in everything we give God the glory.

What has marriage taken away from you?

All these things they are doing on social media, if not for my husband, I would have scattered the whole thing. Dr Seye Kehinde has known me for a very long time. I have been a warrior, I have been a fighter. I am a young girl who fought to survive all her life, but I realised that people don’t want me to survive, so once I notice any movement then, I would start trouble with them. But marriage has taken a lot from me.

When we got married I told my husband, “if you have any woman you are talking to, be careful because now that we are married, they can record your voice and sell it to bloggers; I told him the second day of our wedding. He said who knows him, what’s his own business, And at the end of the day when they recorded his voice and sold it to a blogger, I was furious; that these people finally got me.

Because, if not for the voice, nobody can dare, we would have dragged it to the end. People know me, I don’t do prostitution, I don’t mess around, I don’t go to clubs, I have paid my dues. As a celebrity, I denied myself of so many things I should have access to, all because I don’t want them to mess me up. I realised they could record my nude, I realised they could record my voice, I knew they can poison me. There are so many things I knew they could do, so I stayed away from them. That is one of the reasons people said I don’t relate with people. It’s not my fault, I was only focusing on where I am going.

My watchword has always been “poverty is bitter” I don’t want to go to poverty. But my husband is new in the game, so I was perplexed when I heard his voice. As for me, anything that has to do with scandal always favours me. Those people who didn’t know me would want to know me, to confirm either bad or good, then my personality will speak for me. My personality buys me more connection and thanks to blackmailers. If not for blackmailers I will not be this great. My blackmailers always come back, and that always makes the high calibres in the society want to know me and by the time they get close to me, they would realise the real me and they will start giving me contracts. All the land businesses I am doing is owing to the connection, and the connections came as a result of blackmailing. It is easy for people to destroy you, but if you don’t destroy yourself, you are good to go. They said I was a cocaine pusher, but I have never known or seen any cocaine pusher in my life.

So, by the grace of God, my home and marriage are secured.

Many people outside think Lizzy is tough, but talking to you, meeting you is different. What has kept you going?

Any woman with loud voice is a threat to society. A lot of people see me as a threat, even the fellow women who are supposed to learn from me see me as a deadly threat. Who is she? How old is she? Where did she come from? Those are the questions that always pop up any time I speak my mind. When I speak, it takes someone that is grounded, and intelligent to understand my point. When I talk, those who are not intelligent see it as noise. I know I have that gift, to speak intelligently and I have been able to utilise the gift by minding my business. I have been able to manage the talent by staying focused.

I have been able to manage this talent by standing firm. And that has been my staying power. I will continue to say this, poverty is not good.

What do you make of all the stories that came out after giving birth?

I used them to make more money because when they talk, I would come out to debunk it. I won’t talk to them, I won’t call names. I will just do funny things and stylishly debunk the story, meanwhile, I will still use that opportunity to advertise my business. And I have been doing my normal programme; liberating women. And that is what they don’t want. They want me to leave social media, by all means, forgetting that I am the queen of that social media when it comes to using social media to make money. I utilise my social media platforms very well. And God has been helping me.

How Attacks From My Haters Strengthened My Marriage – LIZ ANJORIN was last modified: November 17th, 2021 by City People