Alibaba’s Ma meets Trump, promises to bring one million jobs to US 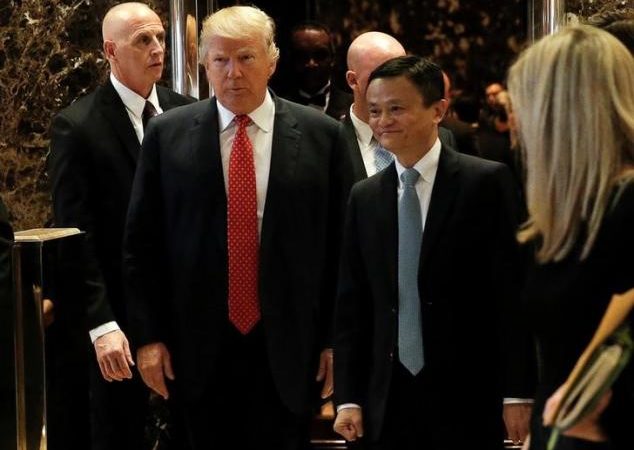 Alibaba Executive Chairman Jack Ma met U.S. President-elect Donald Trump on Monday and laid out the Chinese e-commerce giant’s new plan to bring one million small U.S. businesses onto its platform to sell to Chinese consumers over the next five years, an Alibaba spokesman said.

Alibaba has previously campaigned to bring more small U.S. businesses onto the company’s sites, but this is the first time Ma has discussed specific targets.

Trump and Ma emerged from their meeting at Trump Tower in New York together. The president-elect told reporters they had a “great meeting” and would do great things together. Ma called Trump “smart” and “open-minded.”

Ma said the two mainly discussed supporting small businesses, especially in the Midwest, such as farmers and small clothing makers, who could tap the Chinese market directly through Alibaba, whose Tmall online shopping platform offers virtual store fronts and payment portals to merchants.

The company has in recent years been aggressively courting foreign brands to set up Tmall stores to sell to China’s vast and growing middle class by offering to smoothen out Chinese sales, payment and shipping processes.

Ma, a Chinese citizen, appears frequently with leaders from the highest echelons of the Communist Party, and both sides have voiced their support and admiration for each other.

Trump often targeted China in the election campaign, blaming Beijing for U.S. job losses and vowing to impose 45 percent tariffs on Chinese imports. He also promised to call China a currency manipulator on his first day in office.

Alibaba has deep ties with the Chinese government, working closely on some of the country’s core technology development goals including cloud infrastructure and big data.

“It’s important, given the anti-China rhetoric that has been coming out, to innoculate the company and himself from that.” said Duncan Clark, chairman of investment advisory firm BDA China and author of a book on Alibaba, of Ma’s meeting with Trump.

“There’s nothing to lose in talking about what they’re trying to do here which is stimulate demand in China,” said Clark.

But some foreign retailers have had mixed success on Tmall. In September, the Wall Street Journal reported that luxury handbag maker Coach closed its flagship store on Tmall. It quoted a Coach spokeswoman as saying that they wanted to consolidate resources.

“It’ll require a big effort,” Clark said of Ma’s prediction that the platform could help create one million U.S. jobs.

“There’s no one who could prove or disprove how likely that’s going to be,” he said.

Alibaba did not mention whether Trump and Ma spoke about an ongoing U.S. Securities and Exchange Commission investigation into Alibaba’s accounting practices. Trump’s top choice for the incoming head of the commission, Wall Street lawyer Jay Clayton, worked on Alibaba’s initial public offering.

The U.S Trade Representative last month returned the Chinese e-commerce giant to an infamous list of blacklisted online retailers over concerns that the company was not doing enough to stop counterfeiting on their sites.

Alibaba’s Ma meets Trump, promises to bring one million jobs to US was last modified: January 10th, 2017 by Arinze Ago

Pastor Chops Off Wife’s Breast With A Knife