All The Messy Details

On Wednesday 30th of August 2017, officials of Asset Management Corporation of Nigeria (AMCON) stormed a popular 4 Star Hotel at 12, Allen Avenue, Ikeja, Lagos Group Managing Director in an attempt to forcefully seal up and take over the hotel belonging to Mr. Edward Akinlade, the Suru Group GMD because of a debt he is allegedly owing Oceanic Bank (now Ecobank).

It took the timely intervention of the GMD of Suru Group himself who fought back the attempts to take over the hotel, as Federal High Court Baliffs, Policemen and Officials from AMCON attempted to serve the Management of the hotel with a May 2017 Judgement of Justice M.B. Idris, who is presiding over the case. 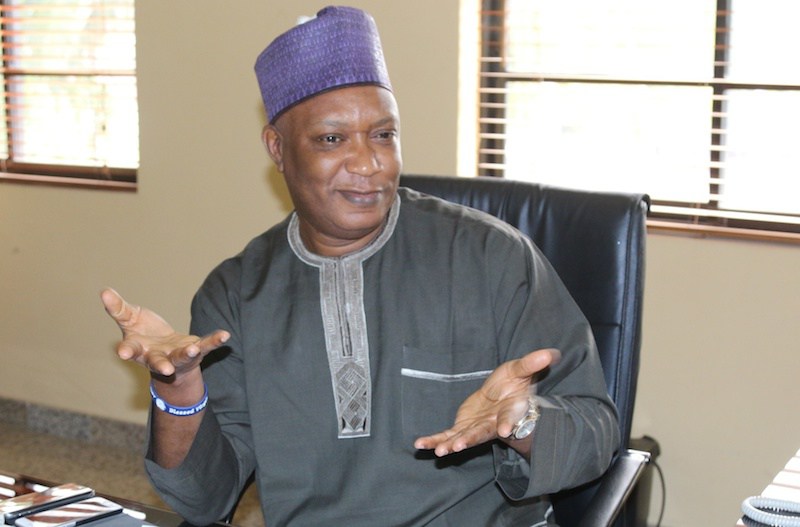 When the Lawyers of Suru Group checked the judgment, they realized that they weren’t included in the law suit filed by AMCON that had the Inspector General of Police, Commissioner of Police, Lagos Commandant-General of the Nigeria Security and Civil Defence Corps and the Lagos State Commandant of the Nigeria Security and Civil Defense Corps. What made their move appear more suspicious is the fact that the Lagos State High Court is currently on vacation.

Mr. Akinlade was so visibly angry that he physically refused the Court Bailiff and the Police from sealing off the gate of the Hotel with chains because, according to him, “this is an Injustice”.

“This AMCON take over is illegal, we were still waiting to go back to court on October 3rd, 2017 for a case we filed against AMCON at the Federal High Court, only for AMCON to turn around and come up with a judgement that does not concern us”. Attempts by the media to get the AMCON officials to speak was rebuffed, as they said they weren’t ready to talk to the press.

The presence of the many journalists who took photographs of the drama, scared away both the AMCON officials, court baliffs and the police as they quickly left the scene.

When this first attempt failed, the AMCON team and police returned the next day and the 3rd day to try to take over the hotel and seal it up. When that failed they approached the officials of the hotel to allow them to move in and co-run the operations, all in a bid to take control of the hotel.

On 5th September 2017, Akinlade wrote a lengthy petition to the Inspector General of Police, the Lagos Commissioner of Police, the Commandment General of the Nigerian Security and Civil Defence Corps and the Lagos State Commandant of the NSCDC to complain about the Assets Management Corporation of Nigeria (AMCON).

The petition was titled: Fraud & Hostage Taking Of Local and Foreign Guests By Padlocking the Hotel Gates, Preventing them from leaving and some were chased out or left out of fear for their lives.

According to excerpts of the petition: (i)The Company was carrying its lawful business on the above properties on 30/8/2017 when Amcon’s representatives and the police along with some thugs, bombarded the company’s properties at No. 86, Opebi Rd, Ikeja, Lagos, No 12, Rev. Ogunbiyi Street, GRA, Ikeja, Lagos, and 12 Allen Avenue, Ikeja, Lagos, in purported execution of the said judgment of the Honourable Court delivered on 30/5/2017. No 12 Allen avenue is an International Hotel 4 Star Hotel (Best Western Plus, Lagos Ikeja) occupied by local and foreign guests by pad locking the hotel gates, preventing them from leaving and some were chased out or left out of fear for their lives.

(ii) On 30/5/2017, the Honourable Court delivered a judgment, directing the Police to  protect Amcon in the process of exercising its alleged right as a Mortgagee over Company’s properties situated at No. 86, Opebi Rd, Ikeja, Lagos, No 12, Rev. Ogunbiyi Street, GRA, Ikeja, Lagos, and 12 Allen Avenue, Ikeja, Lagos. (copy Judgement enclosed)

(iv)The Amcon herein commenced Suit FHC/L/CS/218/2014 in this court, seeking, amongst others things, an order that it was entitled to recover the debt of the Company in the sum of N15.3B, for which the Company’s properties at  No. 86, Opebi Rd, Ikeja, Lagos, No 12, Rev. Ogunbiyi Street, GRA, Ikeja, Lagos, and 12 Allen Avenue, Ikeja, Lagos, were claimed to have been used as collaterals. In a well-considered decision of the this Honourable Court, Idris J., of 22/6/2015, the said suit was dismissed with cost of N50,000.00 awarded against Amcon, in favour of the Company. No Appeal against the said final decision of the Honourable Court till date. Less than a year after the said order of dismissal, Amcon commenced the current suit without joining the Company.

(v) Both Amcon and  the company are currently before Honourable Justice Hassan on the same alleged indebtedness or otherwise of the Company to Amcon. On 5/7/2017 when this matter came up before the Hon. Justice Hassan, the Company argued its application to dismiss Amcon’s claim for being an abuse of process. Amcon also moved its motions for Preservative order of injunction on the said date and the matter was adjourned to 3/10/2017 for further hearing.

(vi) Hon Justice Hassan has adjourned the suit to 3/10/2107 for the Company herein to respond to the motion by AMCON for the injunction.

(vii)The debt alleged in the suit is the same being claimed by Amcon before Hon. Justice Hassan. In its petition, Suru Group is alleging that the judgment of the Honourable Court delivered on 30/5/2017 was improperly obtained.

(viii)Though Amcon obtained this judgment on 30/5/2017, it deliberately kept it away from the Company until 30/8/2017 when Amcon’s representatives and the Police officers and some thugs forcefully, fraudulently and violently invaded the company’s properties at No. 86, Opebi Rd, Ikeja, Lagos, No 12, Rev. Ogunbiyi Street, GRA, Ikeja, Lagos, and 12 Allen Avenue, Ikeja, Lagos.

(ix) This Suit and Judgment obtained by Amcon thereof constitute fraud both on the court and the Company.

(x) In substance, Amcon chose to file its Suit against Police knowing full well that they have no stake in the subject matter of the suit whilst leaving the Company, the owner of the subject properties out of the suit.

(xi) So, the right of the Company to be fairly heard was breached as it had no notice of either the suit or judgment until 30th August 2017 when the Amcon and the police men invaded the premises. The suit itself constitutes an abuse of the process of the Court.

(xii) That there is no right of enforcement as claimed in the suit and neither has there been any order of foreclosure nor notice of enforcement whatsoever.

(xiv) The Police, since 30/8/2017, have forcibly manned the Company’s properties, in purported execution of the said judgment, scaring away both local and international customers of the Company. The Company’s source of livelihood is seriously under threat by the activities of Amcon and Police.

(xv) If this petition is not fully investigated the company will definitely lose all its customers [both foreign and local] due to constant harassment and illegal activities posed by Amcon and police herein at the company’s properties No. 86, Opebi Rd, Ikeja, Lagos, No 12, Rev. Ogunbiyi Street, GRA, Ikeja, Lagos, and 12 Allen Avenue, Ikeja, Lagos.

(xvi) Amcon’s representatives, on 30/8/2017, whilst seeking to take possession of the said Company properties at No. 86, Opebi Rd, Ikeja, Lagos, No 12, Rev. Ogunbiyi Street, GRA, Ikeja, Lagos, and 12 Allen Avenue, Ikeja, Lagos, converted the court’s judgment to final order for the recovery of  disputed and unproven  debt alleged against the company by any court in Nigeria.”

“We petition your offices to use your good offices to stop this fraud, hostage taking of guests in the interest of Nigeria and Nigerians…

Copies were sent to the. US Embassy in Lagos and British High Commission in Lagos.

SEE ALSO: WANTED: A RESTRUCTURING OF MINDS”, BY FEMI ADESINA