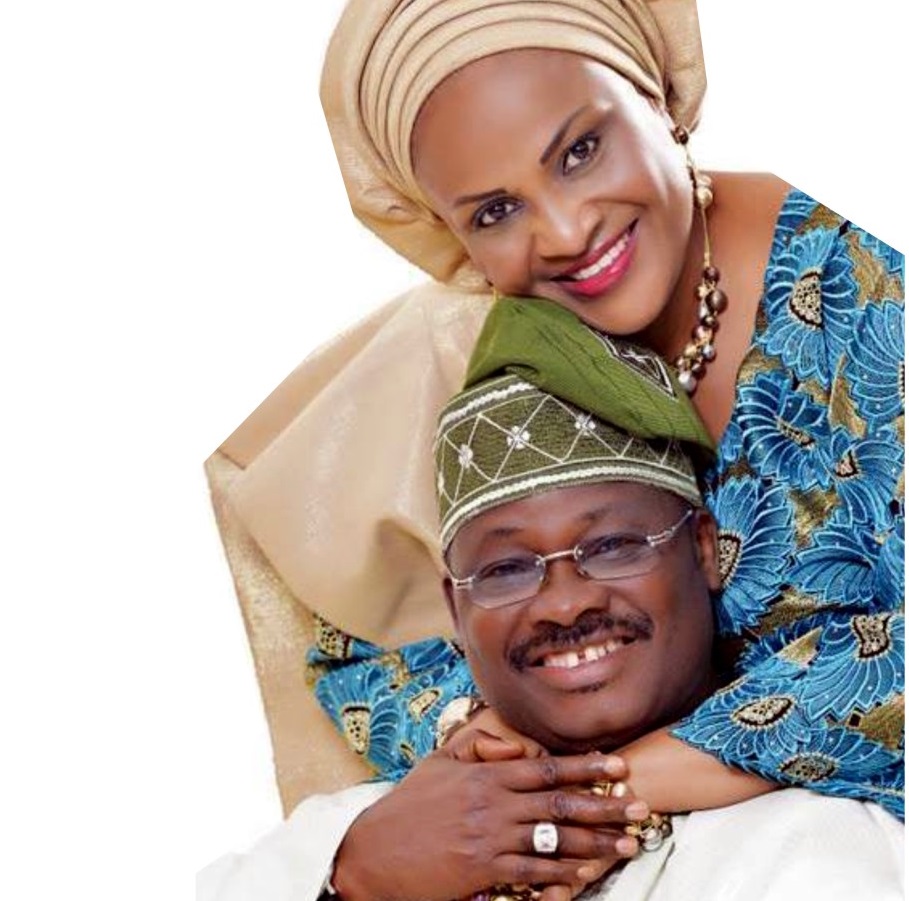 Have you met the OyoState 1st Lady Chief Mrs. Florence Ajimobi before? If you haven’t, let’s tell you a little about her. She is a pretty woman blessed with a flawless skin that glows. And she carries herself with a lot of Grace and Panache. That is why theOyo State Governor, Senator Abiola Ajimobi loves his wife so much.

It is no longer a secret that the Oyo Governor, and his beautiful wife, Florence are very close and so into each other. That is a known fact in the state. And the Governor infact never hides that reality, as he flaunts his love and affection for his wife of many decades, in the open, and in private. Gov. Ajimobi always tells anyone who cares to listen how much he loves his wife who he calls Mummy. Its the same thing with his wife. She is so much in love with her husband who she calls Daddy. The Governor will be 69 in a few days time, but he does not look it. He looks refreshingly young.

Last Tuesday, CityPeople was the guest of the Governor and his wife at the Government House inAgodi, Ibadan, where City People had gone to give the First Lady her well-deserved award. She was with the City People Service-To-Humanity Award, for empowering Oyo State Women and Children in the past 7 years through her passion for the improvement of the quality of the lives of vulnerable groups like Women & Children and ensuring that the less privileged in her state are empowered for financial independence.

After the 1st Lady received her specialised plaque in her private office, she took it to meet her husband. “Let me go and show Daddy my award plaque”, she told us excitedly. And once she showed His Excellency who was having his late lunch of Amala, with the SSG, Oyo APC governorship candidate, Bayo Adelabu, Oyo House of Reps candidate, Shina Peller and some of the governors guests, her plaque, he was so excited too. “This is great”, he remarked. “Congrats. Mummy are we not going to celebrate big? Are we not going to make this award big? Are we not taking photographs?

Everyone around the table  burst out laughing. Once the Governor finished having lunch, he led others to take photos. “Mummy, you have done well. This is highly commendable”, Gov. Ajimobi  remarked.

“I am happy that City People, all the way from Lagos recognised your efforts at adding value to lives in Oyo State”. At one point, during the photo session, the governor over ruled his wife. The 1st Lady wanted her husband to join her to take a shot with her female friends and associate there gathered, but the governor declined and he re-ordered the plan, saying “Let the women take their photo with you first, then we the men can then join you”. The 1st Lady smiled and Gov. Ajimobi said you all can see I over ruled my wife now ooo. You won’t take note of that.  At least you can see she does not control me, like some people think. She is my friend. She is my wife and I am proud of her”.Everyone again burst out laughing. That is one trait of Gov. Ajimobi that many don’t know. He has a robust sense of rumour. If you meet him on a good day he will leave you in stitches.

Several times, during the duration of the visit, the governor and his wife exchanged jokes. Both have become so used to themselves that they tell themselves everything under the sun. The governor cracks any joke he likes with his wife and tells her everything he does.

That is why when he became Oyo Governor in 2011, she decided to support him all the way by initiating her own projects directed at Oyo State Women and Children.

That is why some people say that if anyone commends Governor Ajimobi alone for the untiring vigour and energy he is expending to ensure that he delivers on all his campaign promises, such a person also needs to look at the quantum of work that the First Lady has done in the space of 7 years,  not for the sake of fulfilling particular promises, since she is not holding any elective position but to simply help. According to an insider, for  all the Oyo 1st Lady has done, she has only 2 motivations: love for her husband, which translates to that all-consuming wish that he may succeed in his mission, hence, her decision to complement his efforts. Her second motivation is her intrinsic love for people.  After City People gave the award plaque  to her, she immediately said I am dedicating this to the Women of Oyo State. For her, Service To Humanity informs all she does.

Service to humanity, for the Oyo First Lady, is not a new buzz word. Mrs. Ajimobi has been involved in charity work, seeking out and helping others, long before her husband became governor. So the coming of Mrs. Florence Ajimobi to the Government House in Agodi was essentially a movement to a bigger platform, which necessary preparation had been her previous involvement in humanitarian work in Lions’ Club, as a member and eventually, President.

That was why when the Olubadan-in-Council, in 2013, in their wisdom, strongly felt that along with her husband, the contributions of Mrs. Ajimobi, the wife mother and grandmother should be recognised, in light of the many hundreds and thousands of lives she has impacted. This is to single her out as an example worthy of emulation by the many millions women in Oyo State. She was made the Yeye Aare Atunluse of Ibadanland.

From Lagos, City Peole gathered how Mrs. Ajimobi had transformed the lives of many women in the state. It was in a bid to take adequate care that she organises a conference to empower women for a greater role in the society. In 2017, this pretty wife of the Oyo State governor and convener of the OYSOWA Conference, Mrs. Florence Ajimobi, had, in her address, revealed that the theme of the summit was inspired by “our appraisal of the life of the average woman and how she is able to survive and succeed against all odds. In the course of this appraisal, we discovered that the greatest strength of a successful woman is her resilience.” she tasked the Nigerian women to cultivate the resilience spirit in order to make positive difference in their endeavours.

The annual women summit is one of the many interventions of Mrs. Ajimobi to help the government of her husband in securing meaningful life for Women and Children in the state and beyond. Oyo First Lady is also the Chairperson of the Oyo State Agency for the Control of AIDS (OYSACA) through which she is providing succor to orphanages and children who are being denied parental cares for different reasons. She also gives scholarships from time to time to indigent students at all levels of education, among several other philanthropic and humanitarians gestures. It was for this reason that City People decided to celebrate Chief Mrs. Florence Ajimobi.

An Evening With Gov. AJIMOBI & His Pretty Wife was last modified: November 26th, 2018 by Reporter