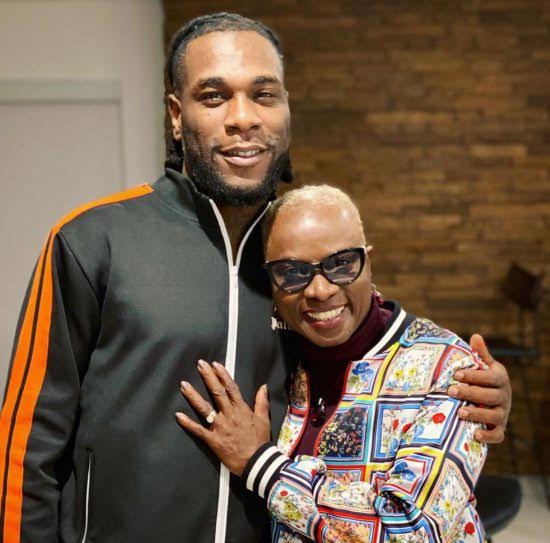 Angelique Kidjo, a Beninese singer, has met with Burna Boy, Nigeria’s Afrofusion singer, and Bose Ogulu, his mum, days after winning the Grammys.

The 59-year-old actress and activist, who is known for her diverse musical influences, appeared to have paid a visit to the home of the ‘African Giant’ singer.

The duo took to their social media platforms on Friday to share pictures they took brimming with smiles.

In one of the videos on social media platforms, the talented songster can be seen discussing with Burna Boy and his mum, while the duo listened attentively.

Kidjo had snagged the Recording Academy’s 2020 ‘Best World Music Album’ award in the same award category in which Burna Boy was nominated for his ‘African Giant’ project.

While receiving her gramophone statuette on Sunday, Kidjo had dedicated her win to Burna Boy, describing him as being among those changing the narrative of music-making in the continent.

“He’s among those artistes from Africa that are changing the way that our continent is perceived and the way that Africa’s has been the bedrock of every music,” the four-time Grammy winner had said.

Burna had, following the loss, reassured his fans around the globe of his commitment to music-making, charging the world to get ready for his comeback.

Reacting to the ‘Ye’ crooner’s loss, Nigerians had flared while Naomi Campbell, an English actress, had criticized the Grammy organisers for failing to recognize Afrobeats as an award category.

“Afrobeats is a musical genre played on mainstream and primetime radio not only across the continent of Africa but across the world,” Campbell wrote in an open letter to the Academy.

“Recently, the genre was put in your ‘World Music’ category at the 2020 Grammys. This misrepresentation diminishes an entire genre in which such a high standard of talent has emerged.

“Did the world get to vote for this award? What will this neglectful categorization of music mean to individual cultures who contribute their blood, sweat, tears, and every level of their creativity?”

Angelina Kidjo Goes On A Date With Burna Boy After Grammys was last modified: February 2nd, 2020 by Damilare Salami