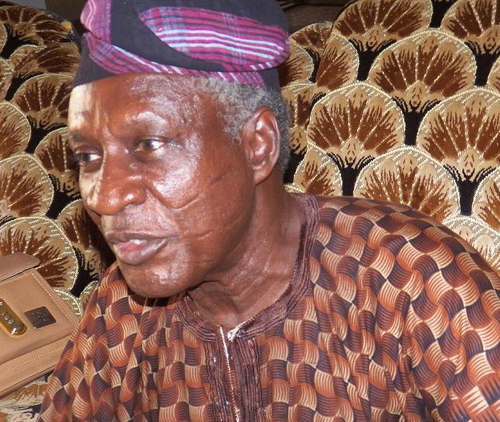 When the news broke, a few weeks back, that Archbishop Ayo Ladigbolu was about to clock 80, it hit many people who know him as a pleasant surprise. This is because the respected man of God does not look 80. Yes he has a sprinkle of grey hair, but he still looks for ever young bubbly and full of life. He is still very agile and active attending o ne meeting or the other in far fling areas across the South-West and beyond. This is because he is a  member of very many socio-cultural organisations. He is still actively involved in Evangelical matters. He is of the Methodist faith and he rose to become an Archbishop in Methodist Church Nigeria. How does he feel at 80? How come he feel at 80? How come he does not look that far gone in age? What is the secret of his ever-young looks? These and many more were the questions City People Publisher, SEYE KEHINDE asked Papa Ladigbolu two Sundays back when he went to meet in Oyo for an 80th birthday interview.

We met a simple man who is content with life. His house in Oyo town is also very simple. He is a man of simple taste and that we could see in his house. He lives a very modest lifestyle. Over lunch, he told City People the story of his life @ 80.

You turned 80 a few days back, how did you feel that morning when woke up?

I didn’t feel too different from how I used to feel, except that I realised that the air was filled with jubilation, and everybody was rejoicing. One felt like, ok, I know I am the cause of all these. I am the cause of the crowd that is gathering, I am the course of the noise that is being made, all over the place. So all I needed to do was just thank God for piloting the journey and safely bringing me to that point.

Each time you look back at the last 80 years how does it make you feel?

My people used to say proverbially that it looked like yesterday. I sense that because looking back, one felt like, oh my God, have I been around so long? And then you begin to look at the events. The number of things you have witnessed. The number of events you have participated in. The people you grew up with, in the same age category. And so, looking back helps one to feel a sense of awe of the mightiness of God, and the goodness of his protecting hand. And to imagine the number that we were born about the same year and grew together, that only a few are left and one happens to be one of the survivors if you like. So looking back, brings back happy memories and of course it reminds one of the sour taste that life has put in ones month, growing up. All said and done here we are. The years seem to have rolled by.

Asking you to talk about your life will fill several volumes. Can we have you share with us the landmark phases of your life?

You are right. There is so much to actually look at. Being born within the royal court of Oyo is a  priviledge. But growing up with parents who were strict enough to ensure that one was not a spoilt-child, and considering that I happened to be my mothers only child and the eldest son of my father and the eldest child of the family, I reall that my parents were a bit hard on me and I believe they were doing all these so that the eldest child will be a model of sorts and a pride to them both. Those are parts of the things one can recall growing up.

I know  that among my peers, even whilst we were growing up I used to be ahead in several ways, to the point that at the age of 14/15 when I started a regular Primary School. My other colleagues wills end me out to go and record the songs that the Apala singers in Oyo were singing. We could not all attend but they would send me to go and listen, knowing that when I come back I will recall and traslate most of the songs. Those were part of the highlights of growing up. By that I mean growing up and becoming a role model amongst my peers.

When we got to the Primary School also, I had the fortune of having what they call double promotion twice. This sped up the number of years one had to spend in school when the universal Free Education programme started in the West, I was always the lead promoter from our own school. They always put me on the table to address the crowd. So, I have been a public speaker since the age of 14 to 15 years. Those are some of the things one could remember.

When I was in the modern school at Dubar I was the City Commentator, that will run commentaries when football matches and athletics was taking place. I didn’t know I was going to be a journalist in the end. But then from Primary School, I was the school editor. When I got to Durbar too, I was already writing for the Nigerian Tribune then and Daily Service reporting major sporting events in the Oyo Metropolitan area.

One of the major events of my life was my conversion from Islam to Christianity. It was an event that shook the entire community because before that event I was deeply and neck deep invovled with Islamic evangelism. But suddenly there was this encounter with Jesus. That was in the late 60s. The whole Oyo town turned around and were wondering what happened. How can this happen to this our evangelist who has now turned against commitment to our religion. And the whole family was surprised also. So, for a number of years I had to leave Oyo. And I was going everywhere talking about my encounter with Jesus. My family happened to be hearing all these things. Reports were been written in the papers about me that I didn’t even soo. So, about 3 years later, after my family had said you are on your own, they invited me back.

They said you are wlecome back into the family we have discovered that the way you are going even though we didn’t like it, but it must be the way of God for you, for your life. So, I got the cooperation of the family, the entire Royal household, my parents. So, that is another highlight of my life. So, eventually my desire to become a Pastor, a Minister grew gradually, developed up to the point where the Methodist Church found me fit to be appointed a Bishop. That was another highlight of my career.

So, I became the 1st Oyo indigene to be a Methodist Bishop. That was one of the highlights of my career. Later on I also became the first Oyo indigene to be appointed an Archbishop in any of the churches in Nigeria, so far. We are praying there will be more bye and bye. Those are highlights. I have been involved with cultural issues I have been involved with most of the socio-cultural organisations like the YORUBA PARAPO, YORUBA UNITY FORUM, and various other groups that have come alive, protecting the interest of the Yoruba nation and promoting the Yoruba culture.

Another highlight I want to mention is my involvement in the preparations and eventual coronation of the new 15th Aare Ona Kakanfo of Yorubaland. The Kabiyeesi, Iku bababyeye, the Alaafin of Oyo gave me that priviledge to serve on that committee, to head the committee.

There are so many highlights

OYO Guber Aspirant, BAYO ADELABU Reveals His Plans + Why He Wants To Take Over From Gov. AJIMOBI