Army Buries Lt Col, Two Others Who Died After Stepping On Buried Bomb 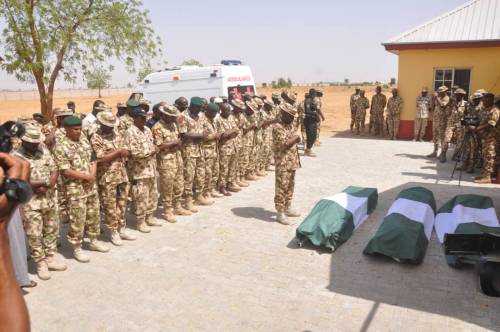 Commanding Officer of 154 Task Force Battalion Lieutenant Colonel Yusuf Ibrahim Aminu, and two soldiers who died when they stepped on a roadside improvised explosive device have been buried in Borno state.

The deaths come few weeks after the Federal Government of Nigeria said it has confined the potency of Boko Haram to the Fringes of the Lake Chad.

Contrary to this, military sources told SaharaReporters that “the incident happened on Monday at 9:30 am after their vehicle stepped on a road planted improvised explosive device between Mauli and Borgozo”.

Four other soldiers involved in the explosion where badly injured and one gun truck was destroyed.

Borgozo where the incident occurred around Allargano forest south of Benisheik towards Damboa where there has been heavy Boko Haram activity in recent days.

READ ALSO: ARMY NOT TAKING OVER GOVERNMENT IN NIGERIA – DHQ

Army Buries Lt Col, Two Others Who Died After Stepping On Buried Bomb was last modified: May 15th, 2019 by Damilare Salami

Army Not Taking Over Government In Nigeria – DHQ