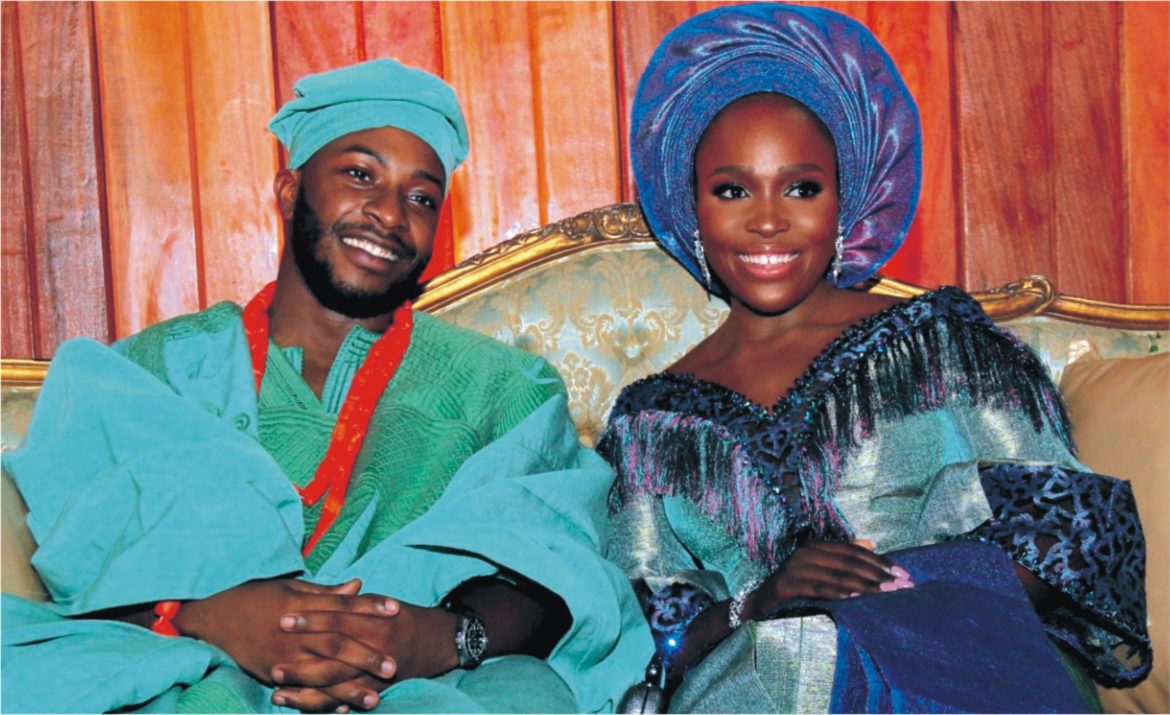 •Details Of The Classy Traditional Wedding In LAGOS

It was a classy traditional wedding on Sunday, 22nd December 2019, at the Balmoral Convention Centre, Ahmadu Bello Way, when the family of Asiwaju Olumide and Chief (Mrs.) Desiree Osunsina, gave out their beautiful daughter, Olamide Osunsina, in marriage to the family of Mr Kojo and Mrs Larai Claud-Ennin, the parents of the groom, Imran Claud-Ennin.

The traditional marriage was grand because of the two big families involved. The Osunsinas are very popular and rich. Don’t forget that Asiwaju Olumide Osunsina is an Egba Chief in Abeokuta. He’s also a real estate tycoon, who has paid his dues in the industry. So, you can imagine the calibre of people who will storm the venue to celebrate with him and his beautiful wife, Desiree.

The groom’s parents too are very popular. The father of the groom is from Okene, Kogi state, and the mother is from Takum, Taraba State, Nigeria.

The official colour for the bride’s family was beige and bronze, while the groom family dazzled in beige and tortoise outfits.

The venue was beautifully decorated by one of the best hands in the event and planning industry. Sara. O Event did a very good job to make sure the hall looked glamorous and beautiful, as it was decorated in green and a touch of yellow. The Ushers too were beautifully dressed in green traditional attire, to complement the decoration of the hall.

HOW DID IT START?

The event officially started when Dr. Akinbowale Osunsina was asked to say the opening prayer about some minutes to 3:PM, which he briefly did. The prayer officially announced the commencement of the traditional marriage. Shortly after the prayer, a minute was also observed to honour those who have lost their lives in the course of the year. After all these, the moderator, popularly called Alaga in Yoruba finally opened the floor.

LET’S TELL YOU MORE ABOUT The BRIDE’S PARENTS

THE GRAND ENTRY OF THE GROOM AND BRIDE

Briefly after the introduction from the 2 families, the groom, Imran Claud-Ennin, was ushered in by friends and well-wishers, who danced to the local drumming. One of the first task by the groom was to prostrate with his friends for the bride’s parents, who were all dressed in light green attire and matched with yellow caps.

Shortly after the groom had been blessed by the parents of the bride and photos were taken the bride was also asked to dance in.

The grand entry of the bride was beautifully done, as she was surrounded by friends and family who were dressed in yellow outfits and the bride was in light green gown. She was led to the stage after she had been received by the family of the groom and necessary rites were performed before she joined the groom on stage, where he had been waiting to receive her.

THE PRESENTATION OF MARRIAGE PROPOSAL LETTER TO THE BRIDE’S PARENTS

As culture demands, the family of the groom sent a proposal letter to the bride’s family, asking for their daughter’s hand in marriage officially. Mrs Desiree received the letter and handed it over to her husband before they gave it to their daughter, Demilade, who read it aloud. The letter reads: “This is a marriage proposal letter and we are seeking the hand of your daughter in marriage with our son. Your daughter, combines brain, beauty and humility. “Shortly after this, a response was quickly sent indicating that their request was granted.

THE SECOND GRAND ENTRY OF THE GROOM

Mr Imran Claud-Ennin (groom) had a wonderful grand entry into the hall as he was being accompanied by his friends who were all in deep blue traditional wears (agbada) matched with yellow caps. Their entry made heads turn because it added glamour and prestige to their dance. They were also seen observing marital rites as they all prostrated to receive blessings from the family of Osunsinas

THE GRAND ENTRY OF THE BRIDE ALSO CATCHES ATTENTION

The bride, Olamide Osunsina was very beautiful in her dress, as she danced in with her friends who were all in yellow attire except the bride, who rocked light green attire. The bride, also took some photographs with the parents of the groom, as tradition demands.

Oba Elegushi, Saheed Ademola and his beautiful wife, Oloori Shekinat Aramide, stepped out at the Osunsina daughter’s wedding. The celebrity couple had a lovely time at the event.

Lagos State Governor, Babajide Sanwo-Olu, stormed the venue with his entourage. He was in white traditional attire. The moment he arrived, the atmosphere of the hall changed, as top dignitaries embraced him to have a handshake. He was immediately led to the seat Ooni of Ife, Oba Elegushi, and other top dignitaries were seated. Let’s also tell that, Alake of Egba, Oba Adedotun Aremu Gbadebo also came with his large number of the entourage.

A former governor of  Cross River, Donald Duke, Alhaja Badiru, Olanrewaju Gregory is the MC, Micheal Dada and wife, a former Lagos Deputy Governor, Femi Pedro and many others.

READ ALSO: MY 25 YRS IN POLITICS HAS TAUGHT ME A LOT OF LESSONS – SENATOR GANIU SOLOMON’S 60TH BIRTHDAY INTERVIEW