At The 8th Day Fidau Prayer & Final Burial Of The Patriarch Of (SMO)ONANUGA Dynasty, Alhaji(Chief)Sabit Kolawole Onanuga In Ijebu-Ode 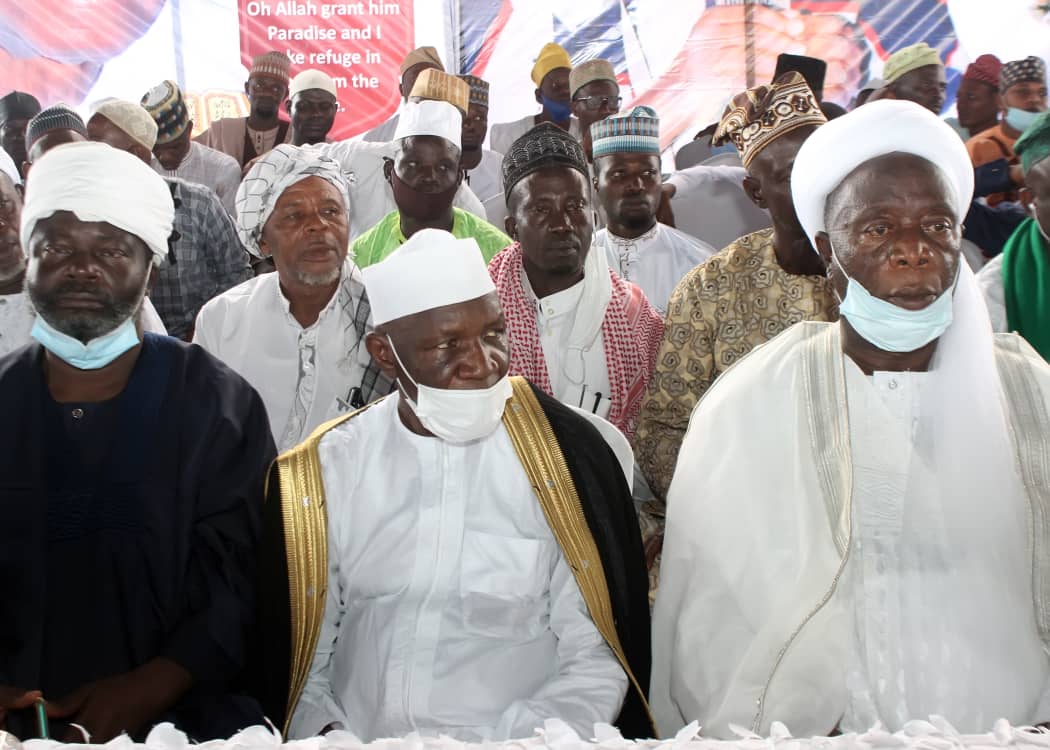 Saturday 28th August would remain an unforgettable day for the popular SMO Onanuga dynasty of Ijebu Ode, as they had a memorable fidau prayer for their patriarch, late Alhaji Sabit Kolawole Onanuga, who is also The Otun Baba Adinni of Ijebu Ode Central Mosque. He
passed on at age 90.

The day marked the 8th-day funeral ceremony of the father-in-law of Senator Lekan Mustapha,.He was also the elder brother of the Editor-in-chief of The News Magazine , Bayo Onanuga, and many other prominent Onanuga family members like Laide Onanuga,a politician and a father to many children. Losing him to the cold hands of death after a brief illness on the 21st of August was a painful experience for the family and the community at large.

Pa Onanuga was described as a very courageous, industrious, compassionate man who could give his eyes to the needy.

When the news of his death broke, the children got condolence letters from the Executive Governor of Ogun State, Prince Dapo Abiodun, Senator Ibikunle Amosun, Otunba Gbenga Daniel, Hon. Niyi Uthman, and many more.

No wonder, the entire town of Ijebu Ode in Ogun State received an influx of unusual dignitaries who stormed Pa Onanuga’s Fidau prayers at the Dipo Dina International Stadium, Ijebu Ode.
It remains one of the most talked-about parties of the year in Ijebuland, as it had over 2,000 guests in attendance. It was well attended by the crème de la crème of the society, royal fathers, political bigwigs, captains of industries, Islamic clerics, corporate organizations, to mention but a few. It was a show of Power, Wealth, Affluence and luxury at its peak,as prominent guests stormed Ijebu ode in a collection of exotic jeeps and cars.

The event kicked off with prayers and the fidau was presided over by the Chief Imam Of Ijebu Ode, and other eminent Islamic clerics, who prayed for the deceased, his children and family. Over 20 eminent Islamic clerics across Nigeria stormed the Fidau prayer. The Fidau lasted for hours and it was witnessed by political bigwigs.

It was a gathering of royal fathers from different parts of Yoruba race who came to give royal blessings. HRM Akarigbo of Remo, Oba Babatunde Ajayi, The Olu of Ilaro and paramount ruler of Yewa Land, Oba Kehinde Olugbenle , The Olu Of Itori Oba, Abdul Fatai Akorede Akamo, the Ebumawe of Ago Iwoye, Oba Rasaq Adenugba, Alaperu of Iperu, to mention but a few.
It was a no invite, no entry event. There was maximum security and the personnel were very diligent at what they were doing, and all COVID-19 protocols were duly followed.

All the children of the deceased and their spouses rocked a luxury brown Aso Oke and white attire. They were all beautiful to behold and their fashion statements made heads turn.

A first-class Muslim cleric, Sheyh Muyideem Bello was at the 8th-day Fidau prayer to reveal shocking things that may be happening to Pa Onanuga’s remains in the grave and urged family members and friends to learn from him;

“The Otun Baba Adinni was rich and influential, no doubt, but despite, whoever is owing him should return the money. If you don’t return the money, it will affect you and your generation on the day of resurrection.

“Also, for as many people who he may owe while he was alive, I implore those who will be in charge of his properties to return such money to those concerned”, so that he could also be at peace in heaven, and so that his grave could be convenient for him. I said it a while ago that observing 3 days, 8 days or 41 days after the burial of a Muslim is not in the Sharia.
It is the cleric who did a research and made some mysterious findings that man may not understand.

“When baba was buried, he had no idea that he was dead. It is on the 3rd day that he would notice that he is no longer where he used to be.”

He urged the guests to emulate the kindness and warm hospitality that baba displayed while he was alive.

Let’s tell you a little about the deceased, Alhaji Chief Sabit Kolawole Onanuga,who was born into the Anikilaya ruling house of Ijebu Ode on 22 September, 1931. His father, Alhaji Mustapha Onanuga was a dashing rich man who popularized Aso Oke in Ijebu land. He lost his mother at a tender age while he was in primary school. He attended Moslem Primary School Isoku and completed his secondary school education at Olu-Iwa Commercial In Ijebu-Ode.

His commitment to Islam with his first wife Alahaja Abike Fatimo Onanuga earned both of them the Islamic titles of Otun Baba Adini and Iya Sunna of Ijebuland,respectively.
His faith didn’t waiver until he died, on Saturday 21 August 2021, exactly 55 years after his own father died.

He was one of the first young entrepreneurs who pioneered the importation of shoes, bags wristwatches and caps in Ijebu-Ode in the fifties.

At The 8th Day Fidau Prayer & Final Burial Of The Patriarch Of (SMO)ONANUGA Dynasty, Alhaji(Chief)Sabit Kolawole Onanuga In Ijebu-Ode was last modified: August 30th, 2021 by Reporter