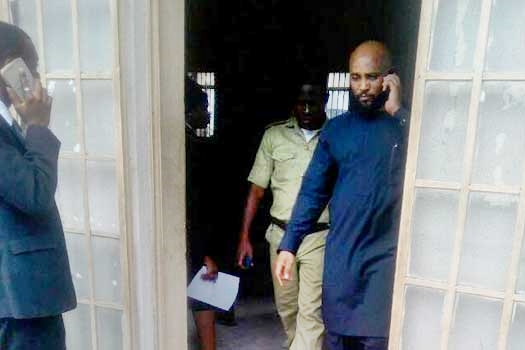 Aminu Abubakar, son of former Vice President Atiku Abubakar, was released from prison custody on Wednesday after earlier being remanded by the court.
This was announced by Festus Keyamo, who is representing Abubakar’s estranged wife, Ummi Fatima Bolori, according to SaharaReporters.
The Lagos State Magistrate Court, Tinubu had, yesterday, remanded Aminu in a transit cell for alleged disobedience to an order made on October 11.
The court, in October, had ordered Aminu to produce his son, Amir Atiku, who is a subject of litigation. Aminu allegedly took custody of 8-year-old Amir, from his estranged wife, Fatima Bolori.
When the matter came up yesterday for the discharge of “emergency, evacuation/protection order” made by the court, lawyer to Aminu informed the court that the parties were making plans to settle the matter out-of-court.
Fatima’s lawyer, Nwabuzor Okoh, denied ever receiving any notification or information from the respondent to settle the matter out-of-court. Following the development, Magistrate Ayeye ordered the remand of Aminu in cell for not producing his son in court, against an earlier order. She consequently stood down the case pending when the boy would be in court.
Mr. Abubakar and Ms. Bolori have been in a legal battle over the custody of their children. The couple had divorced in 2011 and had agreed to allow the children to spend time with their father while on vacation.
In 2013, however, Mr. Abubakar allegedly refused to return the children to their mother.
On October 11, 2017, Chief Magistrate K.B. Ayeye of the Tinubu Magistrate Court in Lagos ordered Mr. Abubakar to produce his six-year-old son in court, but he failed to do so. Mr. Abubakar was subsequently ordered to be remanded by the court on Wednesday, October 18.
However, according to Ms. Bolori’s attorney, Festus Keyamo, Mr. Abubakar later produced his son in court as ordered. He was then released from prison custody.
Mr. Keyamo added that Ms. Bolori has since been reunited with her two children.
Atiku’s Son Finally Released From Prison…His Lawyer, Festus Keyamo Reveals Why was last modified: October 19th, 2017 by Arinze Ago