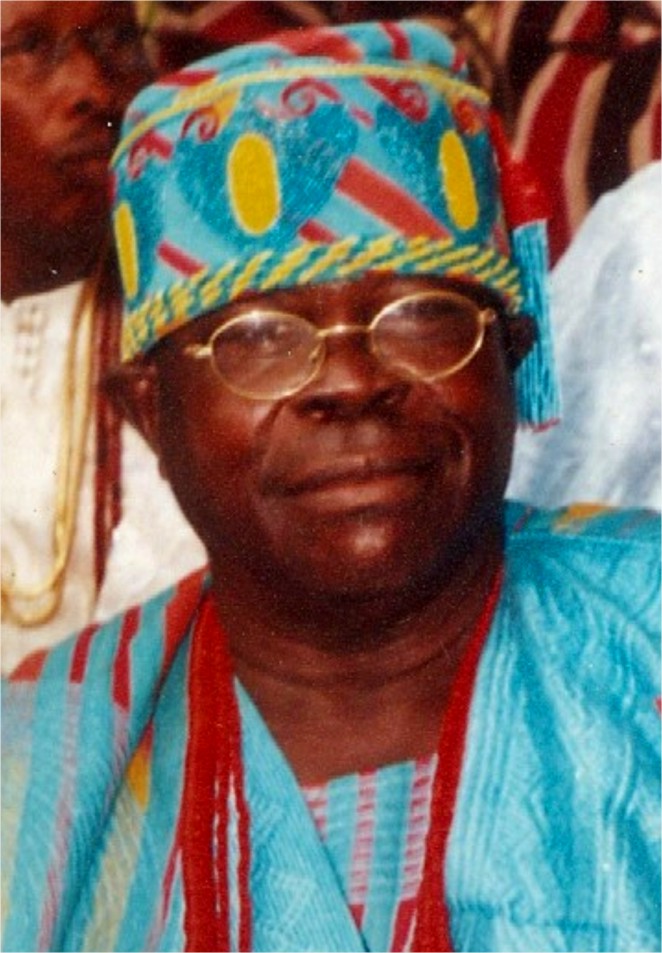 Alayeluwa, Oba Yinusa Oladele Adekoya, the Dagburewa of Idowa is one of the most powerful kings in Ijebuland. He is the 2nd in command to the Awujale of Ijebuland, Oba Sikiru Adetona. He is also one of the closest Obas to him. So close are they that hardly does a day passes without Oba Adekoya visiting the Awujale. He is not only there for the Awujale, he represents him at functions. They are also brothers.

History has it that the Dagburewe and Awujale are brothers. How, you may ask? Lets tell you the story. An Awujale whose name was Otutubiosun and the 13th Awujale from Obanta became affected with a dreadful skin disease known as Ogodo (yaws). In consequence of this, he had to leave the town and sought cure at a place called Idowa, a few miles from Ijebu-Ode, but when for a longtime he was not cured and the disease had completely disfigured him, the people decided to have another Oba and his brother “Juwaka” (Ajuwakale) was chosen and crowned as Oba. Later, Otutubiosun was cured and decided to return to the town and even to the throne.

His brother was unwilling to abdicate for him, and also the people were unwilling to have him again as their Oba because the disease had disfigured him leaving horrible marks on his face. When the people heard he was determined to return home and to the throne, they sent messengers to Idowa to tell him not to return to Ijebu-Ode and to the throne. He refused and started his journey home. The people then sought the help of one Sengolu the Head of Orunsen Quarter to plead with him not to come. Sengolu started his journey to Idowa but met him (Otutubiosun) outside the town gale and thus persuaded him to return to Idowa which he did. The Yoruba word for entreaty is “Ipe”, and so the place was known today as Imepe the place of Entreaty. He became the first Dagburewe of Idowa.

As you read this, the Kabiyesi and the people of Idowa are in a happy mood because Oba Adekoya is 85.

Oba Yinusa Oladele Adekoya was born on 11th October. 1935 at Idowa in Ogun State. He was educated variously at the Macwen College of Secretarial Studies, and Universities in Nigeria such as Nsukka (UNN) in 1962, while in 1973 he was at the Institute of Administration, University of Ife (now Obafemi Awolowo University) where he bagged a certificate in Administrative and Management Techniques. He also attended at various times, Royal Institute of Public Administration, London, and bagged several professional certificates such as Certificate in Advanced Management Techniques, Certificate in Personnel Management. Certificate in Management Consultancy and Certificate in Advance Records Management. In 1978, he bagged Certificate in Management Consultancy and Certificate in Wages & Salary Admin from Urwick Orr Management Centre, Slough. England. He later proceeded to Industrial Society, London in 1990 and bagged Certificate in records Management. His Royal Highness, Oba Y. O. Adekoa joined the Federal Civil Service on 1st May, 1958 as a Clerk in the Prime Minister’s Office. He got a Federal Government Busary to Study Secretarial Studies at the University of Nigeria Nsukka in 1962. On finishing at the University, he was posted to the Federal Ministry of Labour as Personal Assistant to the Permanent Secretary and later as Private Secretary to the Honourable Minister of Labour and Social Welfare. He attended the International Labour Conference (ILO) Geneva, Switzerland in 1963, 1964 and 1965. The ILO Conference took him to the Scandinavian Countries of Denmark, Sweden and Norway. He also attended the African Labour Conference in Ethiopia, Addis Ababa in 1964. He was promoted to the prestigious Administrative Class of the Federal Civil Service in 1977 and rose steadily from the grade of Admin. Officer VII to Administrative Officer Grade II; until the new Civil Service Reforms re-designated the post to that of Assistant Director. While in the Service, he served ad-hoc member of the Job Evaluation Task Force during the Public Service Review Commission (otherwise known as Udoji Commission in 1973-74). He equally served on the Job Evaluation Team at Williams and Williams Review Panel in 1975. He was for many years Federal Gate to the Meetings of National Council on Establishment and National Negotiating Council (I), (II) and (III) where the conditions of service of Federal Civil Servants and State Civil Service were determined after consultation with the Trade Unions Side. Official Nigeria Delegate to the meeting of Economic Community of West African States (ECOWAS) in Burkina Faso, Lome, and Gambia on personnel matters of Statutory and local staff of the Organisations. Member of the Nine Member Team appointed by the Hon. Minister of Communications of the placement of NITEL staff in 1986. He was a member of the four-mart Team on Comparative Fact Finding tour of United States of America, United Kingdom, Egypt, Kenya and Turkey on the condition of service of Air Traffic Controllers in the Federal Ministry of Transport and Aviation in 1977. A member of the Salary Fact Finding Team on behalf of the Nigeria Airways for pilots, Engineers and Cabin Crew in the United Kingdom, Amsterdam and Western Germany in 1978. Leader of the Special Task Force for the re-organization of the Central Records and Pensions Registries containing 30,000 files of Establishments Department, Office of the Head of Service of the Federal Civil Service of the Federation in 1981-83. He was the Chairman of the National Council on Establishment Committee on the Review of the Annual Performance Appraisal Form for the Federal and States Civil Services in 1991-92. He served in the following Ministries: Prime Minister’s Office; Cabinet Office, Ministry of Pensions, Ministry of Internal Affairs, Ministry of Labour, Ministry of Establishments, Office of Head of Service.

HIS ACHIEVEMENTS SINCE HE CAME TO THE THRONE

Since he came to the throne, Idowa has witnessed tremendous progress, namely, the laying and construction of more than N15m Modern Dagburewe Palace Complex.

The raising and roofing of Idowa Town Hall. It was during the period often years that the Federal Government built a modern and standard Nigeria Police Station at Idowa for which he granted the land on which it was built free of charge. The renovation of the Idowa Health Centre by Odogbolu Local Government. The upgrading of the former Primary Health Care Centre Ala/Idowa to a full fledge General Hospital. On Education, about three Nursery Schools were established by Private Proprietors and the Idowa Muslim Community in Idowa and these Nursery Schools are assisting a lot in moulding the lives of our younger generations. Two additional Secondary Schools were established (i) Oasis Secondary School and (ii) Al-Azeem Secondary School He was appointed a Justice of the Peace on 17th December, 1997 by Ogun State Government. He was conferred with the National Honour of Officer of the Order of the Niger (OON) by His Excellency, the President and Commander-in-Chief of the Armed Forces of the Federal Republic of Nigeria, Chief Olusegun Obasanjo, GCFR on 16’h December, 2003. He thanks the Almighty God that his 20 years on the throne of Dagburewe has been glorious and ushered in a new dawn in the ancient town ofIdowa. The tremendous peace Idowa enjoyed over the years has largely been due to the understanding and love the people have for him and his style of leadership. There is no doubt that he should continue to serve them and continuously forge ahead to achieve greater heights in the development of the town.

Why OKE AGBO Community In IJEBU IGBO Is Popular

Why Awujale Of Ijebu Made MIKE ADENUGA An Otunba