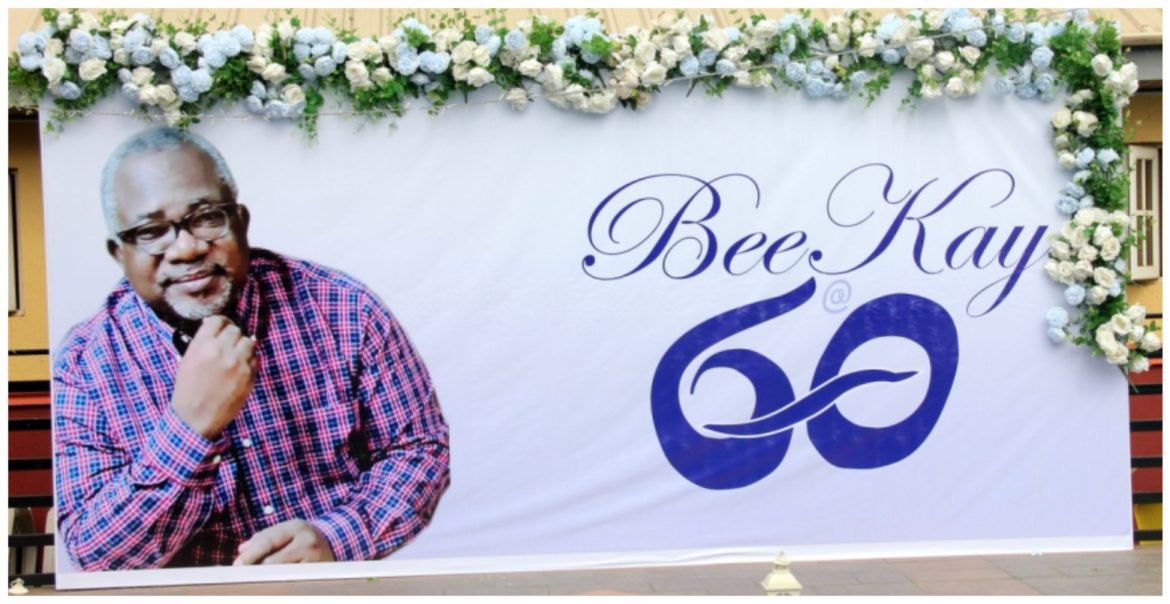 BeeKay as he is popularly called by many of his friends celebrated his 60th birthday with friends and family and had his pictures displayed, decorating the poolside and with lots of colourful petals and balloons.

Jade Options, was the event planner and did a wonderful job in setting the pool to taste, as it was filled with beautiful balloons. The event started with a short service led by Venerable Gbenga Fagbemi, who led Beekay, his family and guests through a short line of praise songs and prayers.

A few minutes after the celebrant spoke, the wife was called upon to give her speech.

During the exchange of pleasantries with BeeKay and his family, Phoebean picked up the saxophone as he dazzled the celebrant and guests with lots of beautiful songs.

Various types of food were served. Some of the dignitaries at the event include Otunba Olu Okeowo, Mr Steve Ayorinde, the former Lagos Commissioner for Information and Strategy. The cutting of the cake was conducted by Sir Olu Okeowo, and he said a few things about BeeKay and his family. Below is what the celebrant said about his new life @ 60.

First, let me say both temporal and spiritual, I was not present when I started or rather I did not have the memory to know but from what I have been told and from the records I saw that I also believe according to the records and not an affidavit. Records of my actual birth certificate. I even had to find out in the Lagos State registry as an adult that I am an alumnus of that great institution called Island Maternity Hospital where I was born on the 15th of July 1961. From my recollection too I went to Saint Marys Primary School and went through Holy Cross School in Catholic mission Street. I was born in Olowoigbowo Lagos Island, then I went to Saint George College before I went to the University of Jos and to the Nigerian Law School and then I was called to the BAR. In the year 1986. I had lost my mother. I had lost her as 10 years old and my father when I was 20. So I was a veteran orphan and an experienced one at that. I am an orphan of 40 years, so I have had that experience for the past 40 years. How has it been? Born to a father that was a polygamist and a ladies man who had more than his fair share of women and children but unfortunately, I am not courageous to take after him or would I have been shacked by one woman since 1992. One thing I can say is I have always been determined not to give up. There were difficult times politically, professionally, and financially but to the glory of God, here we are. I remember when I ventured into politics. We didn’t see politics as partisan politics but activism politics. Richard Akinola can talk about our several struggles with Gani Fawehinmi, but somehow he continuously escaped detention when several others were being detained. I ventured into politics through the student union for activism and in 1998 there was a call in partisan politics and we thought we should participate. If you say you are an activist and you say you fought for democracy and you say you want to step back, you will leave it for those who don’t value it.  As a student, I had to struggle with my parents. By the grace of God, I did not derail, even though I had all the opportunities in the world to be a successful conductor, area boy or Fuji musician. I am sure I would have been successful at it and if there was anything like Senior Advocate of Agbero I would have gotten it. There had been times when things were rough when I wanted to give up, where I questioned God. In my politics and legal practice today, people believe it is because I have some people, I have no godfather but I have elected to be in politics and in my legal practice and this is where I want to be. Some of my friends call me a bully because there are some people who think I am too strong-willed, unbending, proud, controversial and arrogant. I will just say I am just BeeKay. I am direct. In my practice,  I recall when I left law school I was in a hurry to make money and Justice Balogun called me and asked me what I wanted to do and I told him that those lawyers under the tree that they call charge and bail make money daily but I can do better than them. He said that’s not where I belong and asked me to go fully into law practice.

I remember my first job with Femi Okunu and co. He offered me a salary of 400 naira a month and I thought about how much we used to spend at bar beach Market, opposite  NTA back then. That was barely enough to patronise Madam Rivers. He told me to collect it and come back at the end of the month for whatever difference I wanted. I thought I had a deal and that was me going fully into legal practice. I never went back to collect the difference and I became the legal adviser of the Guardian press and again I saw an advert in the newspaper and I applied and to the glory of God, I was found fit for the position.

By the time I was becoming interested I had fallen in love with law practice then. Golf Oil which is today Chevron had offered me a job at about the same time I was being offered 400 naira. I had a choice between the law and money and I went for law and ever since I have not left the law profession but that short stint in the Lagos House of Assembly to which I left office due to my strong will and principles. It has been tough and tumble but one thing is certain, God had been gracious. I give God all the glory. I have had a very good marriage and I am blessed with 3 children.

There was a lot of value for integrity and honesty so those were the first attractions.  There was a lot of love for money and all but I wanted someone that saw beyond those things. Even though I like someone who would say things as it is but I think he went overboard. I got more than I prayed for. When I woke up this morning there was a song ringing in my head because he says it has been tough but it has been tough living with him too but “ Emi ni kan lo ye” so I give God all the glory for where he is and where he is going and God has been faithful.

NBC wants us to describe gunshots as fireworks – Shehu Sani

Eid-el-Kabir: Atiku calls for end to the killing of innocent Nigerians, hateful messages