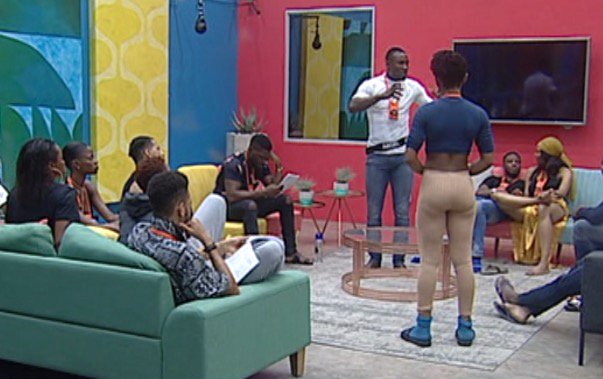 As the Big Brother Naija [BB NAIJA] reality show continues to keep fans glued to their tv sets, Tobi won the head of house title for the second straight week while Khloe, Alex, Cee-C and Ifu Ennada got involved in a heated argument.
The housemates’ true characters, attitudes, leanings, and dispositions are unfolding pretty fast in the Big Brother Naija house.

Recent events, particularly the unexpected mock nominations, has divided the housemates, with alliances being formed and strategies being shaped.

Arguably the most important activity of late was a task which centred on sexual consent, a thorny issue in the society, and on the show.

Last year, Kemen was disqualified from the reality show for making a sexual move on TBoss while she was asleep. The incident led to a heated debate among the housemates and Nigerians on social media.

A few days into the new BBNaija show, Bitto was summoned by Big Brother after he was seen attempting to cuddle a female contestant, Princess, without invitation.

Bitto had snuggled up to Princess in her bed as she tried to sleep, and although she initially tried to ward him off, she eventually relaxed and engaged him a conversation.

That incident again threw up the debate on sexual consent, and Big Brother, on Tuesday, decided to hand the housemates a task on the subject.

The housemates were asked to discuss sexual consent through a radio drama and pantomime — and they did justice to it.

Vandora, BamBam, Anto and Princess were among those who shared their experience and standpoint on the issue.

As opposed to the earlier reported N45 million, the winner of the show is expected to take home N25 million and a sports utility vehicle.