#BBNaija! See The 10 Facts You Probably Didn’t Know About Bambam 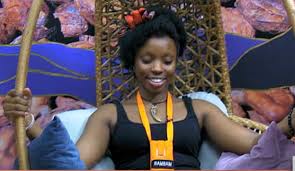 Bambam was one of the 10 female housemates that made it to the 2018 season of the Big Brother Naija reality television show.

Bambam’s eviction came as a shock to her supporters and viewers of the show in general, being that she was sent packing after the Saturday night party. She was the first housemate to have been evicted on Saturday.

At the early stage, Bambam told other housemates she joined the show without the knowledge of her family.

Bambam and her romantic partner, Teddy A, arrived Nigeria yesterday.

Here, we bring you 10 things you may want to know about the housemate:

2. Her real name is Oluwabamike olawunmi.

3. Her parents are divorced and she attended film school as a means of overcoming her parents’separation..

4. She is a very committed church worker at Revival House of Glory International Church.

5. She is an actress, broadcaster, Singer, Voice over artiste, event host, Creative Director, and On Air Personality. She starred in the movie, “The Train.”

8. Bambam is a graduate of Microbiology from Bells University of Technology, Ota, Ogun State.

10. She has a gospel music single entitled, “Rest.”