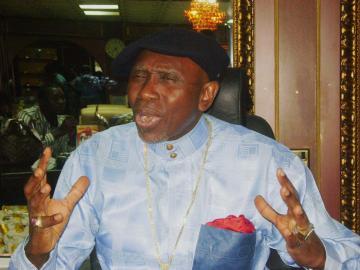 The month of November is very critical to the Word of Life Bible Church in several ways. The founder/Senior Pastor of the church, Pastor Ayodele Joseph Oritsegbubemi Oritsejafor, known as Papa Ayo Oritsejafor was born on November 10; the church was founded on November 15 and the annual convention of the church better known as Jubilee Word Festival takes place in November except this year because of the ongoing Reinhard Bonnke’s Farewell Gospel Crusade billed for the same period.
This year’s Jubilee Word Festival with a theme; “Thy will be done on Earth” with at least eight high flying preachers from across the globe on parade as well as Ron Kenoly and wife, held between October 27 to November 5 just before the Bonnke’s crusade started. Pastor Oritsejafor became the National President of the Pentecostal Fellowship of Nigeria (PFN) on February 7, 2005, a position he held for five years. In July 2010, he was elected to become the first Pentecostal minister to become the President of the Christian Association of Nigeria (CAN) the apex body of all Christians in the country. Pastor Ayo Oritsejafor Ministries was the first to launch a Miracle crusade (Lagos Miracle Crusade) from Africa to world audience, via satellite, in 1987 with evangelist Joe Martins. In this brief interview, he spoke of his experience as National President of CAN for six years. Excerpts…..
Sir, how will you describe your voyage into CAN leadership?
Well, the journey has been very interesting. The word interesting has many meaning. Let me put it the way they put it out there, I have experienced the good, the bad and the ugly. But every experience that came my way has been relevant to the journey. God uses those bad experiences to give me great testimonies. You must understand that Satan will never go after one without value. So I discovered early enough that I have something important that is why when confronted by different difficult experiences, I know God will give me victory. Whatever the experiences, there is a scripture that says all things work together for good to them who love God. Many incredible things have happened in my life even as a Christian and I still would say that the fasting I did for the first three years of my Christian life laid the foundation for whatever I am able to become.
How did you become the president of PFN and CAN at the same time?
I am among the few people who never seek and desire any position in life. I became President of Pentecostal Fellowship of Nigeria (PFN) in an incredible way. I went to attend a National Advisory Council meeting of PFN (the highest decision making body of PFN) and it was at that meeting I was told that I am the president of PFN. It has never been done that way but that is my life. I went to a meeting and ended up becoming the president. When I called my wife, Mama Helen, and told her about it, she said I must be joking because before I left the house, I told her that I was going for a meeting and not to contest for any position. So I answered her that I was not joking and that it’s the truth, and that was how I became president of PFN and I held the position for two tenures, eight years.
While I was still president of PFN, I was the head of the CPFN/PFN bloc in CAN. I was doing a lot of charitable stuff in the Northern region because of the challenges caused by the Boko Haram. When Boko Haram started, I went to Maiduguri, I would charter airplane to carry stuff there. I also went to Bauchi, Jos, Kaduna and different places in the North and I would give them clothing, food and all kinds of material stuff. Suddenly people from the ECWA bloc and not quite long, the president of ECWA came to visit me here in Warri. The people from that bloc really don’t believe much in Pentecostals, so I asked them what they came for, they responded, saying I should become president of CAN. I said they must be kidding because first of all, I’m not interested, secondly I was already the president of PFN that I have a lot on my hands, so they said that those of them from the North have prayed and looked at it and they strongly felt that I am the right person that can lead the Church in this country at that time. I thanked them and told them that those were very good flattering words and that I received them. I said, “thank you very much, God bless you, goodbye.”
***
Via Vanguard
How I Became the President of PFN and CAN At The Same Time – Oritsejafor Opens Up was last modified: November 17th, 2017 by Arinze Ago