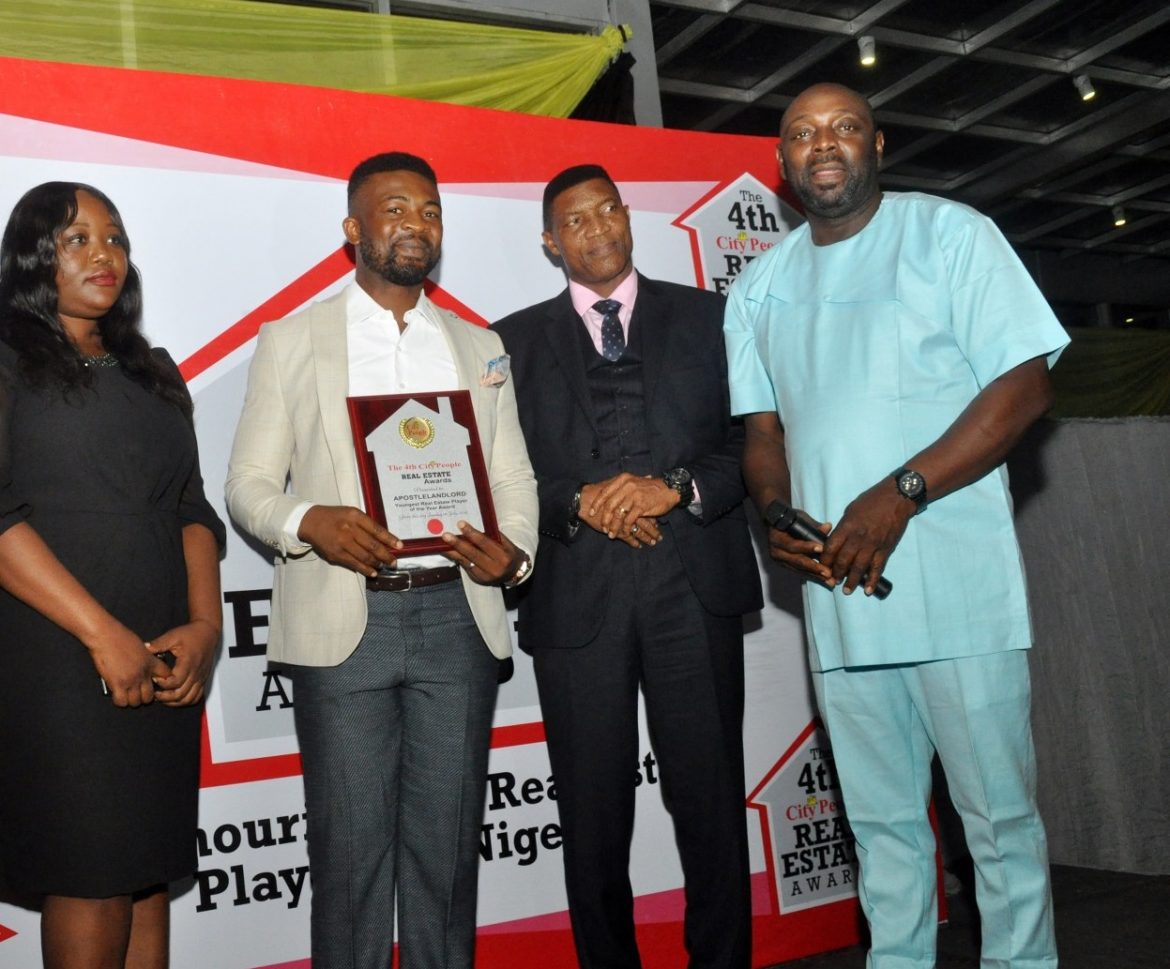 On Sunday 1st of July, 2018 at the Lekki Coliseum, in Lekki Phase One area of Lagos, City People held its 4th annual Real Estate Awards. The event is an annual event meant to celebrate and honour top real estate players in Nigeria who have immensely contributed to the development of the sector.

Despite the heavy downpour, the turn out of guests was very impressive, as many of the crème-de-la-crème in the Nigerian real estate sector stormed the venue.

From about 3pm, the venue had started gathering momentum, as guests and awardees were already filling the seats while several others were having fun taking pictures and doing  interviews on the red carpet.

The first award went to the honourable Minister of Power, Works and Housing, His Excellency, Babatunde Raji Fashola, who was ably represented  by his Special Adviser on Housing and Urban Development, Mr. Biodun Oki. The minister   got the award for his on going  innovative national housing scheme .  Mr. Oki said, the Ministry has made huge progress in terms of the national housing scheme and government is working hard to provide affordable homes for every Nigerian.

GOV. AMOSUN, WAS HONOURED TOO

The second award of the night went to the governor of Ogun State, Sen. Ibikunle Amosun. The plaque was picked on his behalf by the Special Adviser and MD, OPIC, Mr. Babajide Odusolu and Ogun State Special Adviser On Lands, Mr. Biyi Samuel. He emerged real estate’s most friendly governor

The C.E.O of BOD Properties Bode Agboola was accompanied by his team and friends to receive his award. He was overwhelmed and grateful to the organizers of the awards for recognizing hardwork and dedication. He emerged as one of the outstanding real estate players who have positively contributed to the development of the sector.

The C.E.O of EUC Homes  Mr. Ben Odunzeh, received The Best Run Real Estate Company of Year Award. He was present with a couple of his staff and friends. The very gentle and hardworking dude was indeed full of joy for the award, according to him, he is just 3 years in the business, and through hard work he has been able to take the company to its greatest height, and he will forever remain grateful to God for making it happened.

The C.E.O of Empire Homes, Chief Murphy Osuala, came for the event in company of his pretty wife and father. Chief Murphy is very young, very hardworking and energetic.

He was present with his dad, Pa Osuala. Empire Homes was honoured for, its contribution to the development of real estate in Lagos..

RevolutionPlus Properties Development  Company is run by a beautiful couple called Bamidele and Tolulope Onalaja. Together, and with their hardwork and dedication, they have been able to take the company to  greater height. They went home with 2 awards. Their real estate company emerged the most enterprising real estate company of the year award. Their celebrity friends, such as Segun Arinze, Peter Rufai, also accompanied them to celebrate their Awards. The C.E.O of RevolutionsPlus described his wife as a great support system to him. Guests could not help but admire them, as they both danced to receive their second award for the night.

Mr Alex Bankole is the C.E.O of KAB Constructions. He was among the real estate players honoured. He was represented by his wife, Fumilayo.  KAB Construction has done well in the property world. Few weeks back, it started a remarkable project in the heart of Ikeja in Lagos. It is a shopping complex of over 100 shops. The pretty lady was accompanied by her two pretty daughters and sister. She received the award on behalf of her husband and gave a very short and intelligent speech on behalf of her husband.

Aare Adeleke Adebesin, the C.E.O of Kings Intercontinental Homes and Property led his team to collect his Special Recognition Awards. The very hardworking man was so delighted to be honoured by City People, and he expressed this after the awards, also that this is also the first time, he is receiving an award from City People and appreciates it a great deal.

Adeniyi Adams, the C.E. O of Knightstone properties flew in from US just to be part of the great day. He also received award in company of his team, he was equally overwhelmed and appreciated City People for Recognizing his success.

The Chairman of Adron Homes & Properties, Akile Adetola Emmanuel-King is one of the leading real estate players whose contribution has been outstanding over the years. Although he was absent but represented by the Group Executive Secretary, Mr. Ayodeji Omoniyi, Mrs. Folashade, Oloruntoba, Iheoma Azuru.

The award plaque was presented to Mr. Ayodeji Omoniyi, as the company, Adron Homes & Properties won The Most  Innovative Real Estate  Company of the Year and the CEO Of The Company won the Real Estate Personality Of The Year Award.

Otunba Tomori Williams, the CEO of T. Williams Construction is also an important personality who has cut his teeth in the real estate industry. He arrived the venue on time, with some of his friends.

BERGER PAINT IS PAINT COY OF THE YEAR

Berger Paint Nigeria Plc is one of the leading paint companies in Nigeria, established on the 9th, January 1959 and it has become a leader in the coating and allied industry.

The Managing Director, Mr. Peter Felikwe and Marketing Manager, Mrs. Funmi Lawal, were the two notable names who were present to receive the award. The MD thanked City People for the Award.

Alpha Mead is a real estate development company, it is also an asset management and advisory firm.  The CEO is Mr. Femi Akintunde, a real estate expert. He was ably represented by his staff, Olusesan Ogunyooye, Dosu, Egbiki Sunday and many others. Alpha Mead was recognized and honoured for his contribution to the real estate sector.

Otunba Yemi Lawal is the Managing Director of Seagle Properties, one of the credible Nigerian development companies. It focuses on high brow places like Lekki, VI,  Victoria Island and Ikoyi. The company is currently one of the most active developers.

Otunba Lawal was present, he came with one of his aids.

He received 2 awards, the most Active Real Estate Firm and Real Estate Personality of the Year Award.

WITH LOVE FROM MERIT ABODE

Meritabode is one of the leading real estate firms in Nigeria, dedicated towards making a positive difference in the real estate sector. Meritabode Nigeria Ltd has a lot of projects in Lagos and beyond.  The company was ably represented by some of its staff. Some of them were Simisola Daranijo, Bankole Ipadeola, Beatrice Nndom, Donald Funmi Akanbi.

FROM REVOLUTION PLUS PROPERTIES

The CEO of Revolution Plus Properties, Mr Bamidele Onalaja and his wife who also doubles as the Executive Director of the company won the Real Estate couple of the year award.

The presentation was quite outstanding as the couple was joined by former Super Eagles goalkeeper, Peter Rufai and veteran actor, movie producer and director, Segun Arinze.

Oba Olusola Alao, who is the Vice Chairman of Oyo State Council of Obas presented the award to the couple. He is the paramount ruler and the Olugbon of Orile Igbon, a town in Oyo State.

Famously known as Apostle Landlord, Mr. Stanley Obi, the MD/CEO of Sales Crafts Properties who is in his 30s was one of the youngest people to be honoured at the award. He was full of gratitude and accolades for City People for making him feel special. He said, he started real estate at age 26 and he has become one of the big players today.

How I Run My Real Estate Company...