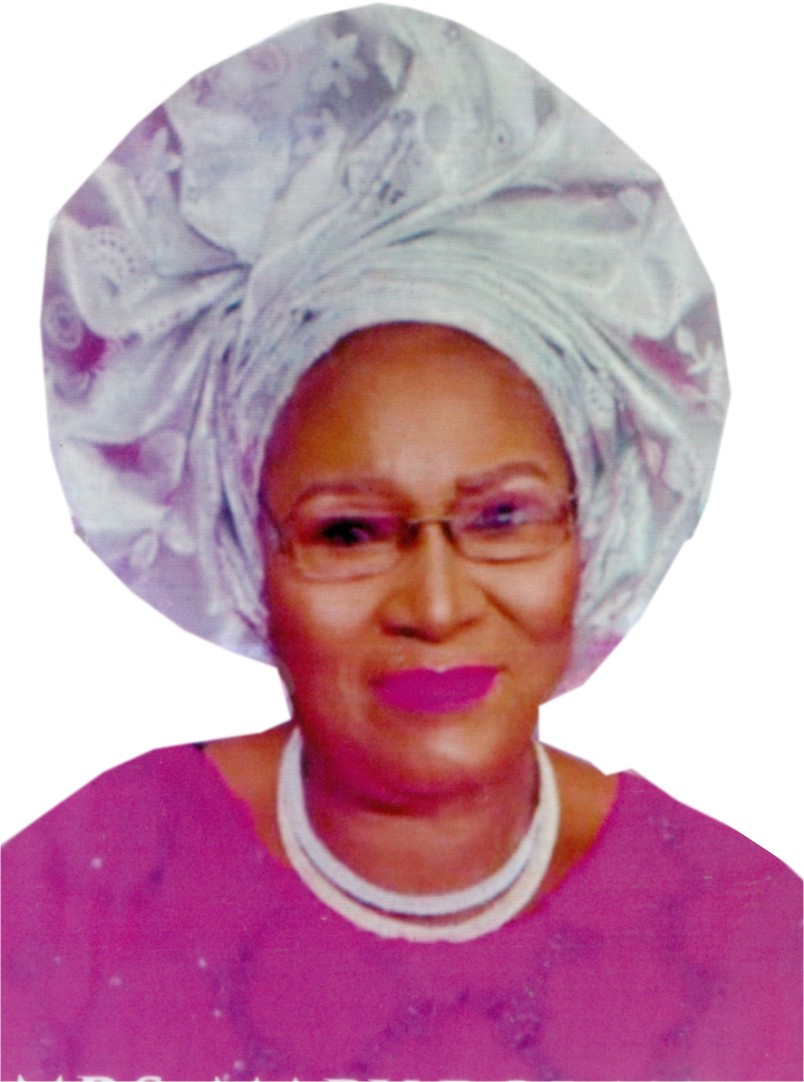 The prayer and wish of every parent is to leave behind lovely and accomplished children who will take good care of them when they are alive and who would also give them a befitting burial when they die.  Late Mrs Mary Bolanle Adetoro (nee Adewunmi) is a typical example of a parent who begot children who are successful, loving and caring.

They did not only take good care of their late mum in her lifetime, they also ensured she got a grand and befitting burial after her demise.

Popular socialite, Biola Adetoro-Williams and her siblings are indeed children that every parent could pray to have. They made their late mum proud by burying her in a super-style, making the event the talk of the town. They hosted family, friends, associates and well-wishers to a grand reception party at the popular Daylan Event Centre, located in the Sango area of Ibadan, Oyo State.

Late Mrs Adetoro died on June 24, 2021, at the ripe age of 71. Her burial programme was held accordingly. It started with a Christian Wake-Keep which was held in her honour on August 12, 2021, at her residence in the Eleyele area of Ibadan.

This was immediately followed by the laying of her body to the final place of rest at her new residence in Ibadan, while guests were taken to the Daylan Event Centre for the reception party.

City People’s JAMIU ABUBAKAR was at the event and he brings to you the blow-by-blow account from the highly colourful reception party.

HOW THE FUNERAL SERVICE WENT

The funeral service of late Mrs. Mary Bolanle Adetoro (nee Adewunmi) was held at The African Church, Holy Trinity Parish along the popular polytechnic road, in the Sango area of Ibadan. It was done under a solemn environment and according to the doctrine of the church.

The body of late Mrs. Adetoro was brought into the church by the undertakers of the Final Call Funeral Care, one of the best in town. They drove her into the church premises in a white Cadillac funeral ambulance.

They carried her stylishly in an elegant white casket well designed with golden handles. They danced and dazzled with the casket before taking it into the church.  The corpse was received at the West door of the church by a procession led by priests, church choirs, family, friends and well-wishers.

As part of the funeral service, sentences from the scripture were read, hymns sung, lessons from the Bible and sermon were read and given respectively. Prayers were said to seek mercy for both the dead and the living after which the choir had their presentation a few hymns were sung. The corpse was taken out of the church with a withdrawal hymn while the procession also accompanied the body of the deceased bidding her farewell.

The service at the graveside was conducted at the new residence of the deceased in Ibadan. Some family members, friends and associates came around to join in the service and to bid farewell to the departed as she was about to be lowered into the mother earth.

The service at this point was really a heartfelt one as everyone upon looking at the shallow grave was calm and ever reflective on how and where they would end up after their being.

Indeed, this is where everyone is going to end someday. It’s only in the prayer and wish of all; that God should spare their lives to live for long and do many great things in life. Late Mrs. Adetoro was buried amidst tears from her lovely children and close relatives after which they rendered dust to dust and ashes to ashes upon her.

AT THE VENUE OF THE RECEPTION

After the successful burial of late Mrs. Adetoro, all roads led to Daylan Event Centre, the venue for the reception party. The event hall was already set for the glamourous party. Right from the main gate into the event centre, they were guards and event bouncers on standby to ensure that everything is in order right from the entrance. Daylan Event Centre is one of the most sought after event centres in the Sango axis of Ibadan. The hall is big and classy. It is the right plug for events like this. Guests had enough space within the premises to park their vehicles. This gave them every cause to feel at home as their vehicles were secured and free from vandals. Entering the hall brought another feeling which is captivating and enticing, a feeling that made a lot stay till at the party for longer than planned.

IT WAS A COLOURFUL PARTY

What you would first observe when you get to the reception hall are people dressed making different style Statements with the Ankara Fabrics. The dominant colours that would catch your attention are Purple and Blue. It was worn by almost everyone at the party. Those who wore something different were also stylish in their respective outfit.

The Aso-Ebi outfits were appreciated at glance. This was even more pronounced during the party proper when guests of each child of the deceased came on stage to dance. The scene was indeed a sight to behold as it was indeed a colourful one.

FOODS AND DRINKS WERE IN ABUNDANCE

The reception party stood out. There was enough food to go round. There was no sort of panic as guests were prompt and delicious treats. There is virtually no food either local or foreign that was not served at the event. Guests were served on request and they what they requested for in time and to taste. Despite the huge numbers of socialites that turned up for the event, there were enough hands to cater to them based on demands. The catering service outfits on the ground were nothing less than ten. These outfits are top brands, highly sought after and are second to none in the business of making guests feel at home at events. No wonder they made it to the event because the children of Mrs. Adetoro would not settle for anything less than the standard as they celebrate their mum for a life well spent.

MEET THE CATERING SERVICES THAT TOOK CARE OF GUESTS

Mrs. Adetoro is survived by 5 lovely children and a number of grandchildren. They so much love their mum and they never take her for granted no matter what. The lovely children of the deceased are Iyabo Salako, Gbenga Adetoro, Busola Adedeji, Biola Adetoro-Williams and Doyin Adetoro. They are all big and successful in their respective disciplines.

WHAT TO KNOW ABOUT THE HIGHLY INSPIRING LIFE OF LATE MRS. MARY ABOLANLE ADETORO

She attended Ebenezer African Church Primary School, Ekotedo and African Church Grammar School, Apata both in Ibadan. Mrs. Adetoro had been a homemaker right from an early age. She always ensured the house was kept clean. She went as far as assisting her neighbours to take care of their children during holidays and weekends.

Mrs. Adetoro was very industrious right from childhood. Her passion for the trading business was quite commendable as she enrolled as an apprentice with a textile business merchant. She did the business at a point in her life and she did remarkably on it.

In primary school days, she would save her daily pocket money as capital to make corn delicacy (Elekute) and Coconut candies to sell to her schoolmates.

Like every child of her father, she served in the church as a choir and was a good singer whose voice marvelled many. As a mother, she loved her children almost to a fault as she gave her time and resources to their care and upbringing.

She also cherished her siblings as she didn’t joke with the welfare of any of them. Many people attested to the selfless generosity and love disposition late Mrs. Adetoro showed to people around her.

She later travelled to the United States of America where she had a few courses and worked as a health worker from 2010 to 2020 when she retired.

Above all, Mrs. Adetoro lived a life of service to God; she was so devoted that she never missed her 6 am prayers with her children and grandchildren. Her demise is no doubt a great and irreparable loss to everyone who knew her as she had left an indelible footprint in the life of many.

Lagos based ace Musician and leader of Faith Music band, Ayo Ajekigbe was the entertainer of the day. He gave a good account of himself with an electrifying stage performance which made all and sundry at the event feel great. Some of the guests couldn’t hold back the vibes in them as they stood to dance to his melodious music.

The Master of Ceremony of the day, MC Massive also did well by ordering the children of the deceased and their respective guests to the stage where Ajekigbe and his Faith Music band rolled out their classic and trendy music to entertain them.

It was indeed a festival of money as friends and associates of the children sprayed money at cheering them to dance.

WHEN BIOLA ADETORO-WILLIAMS AND HUBBY STEPPED ONTO THE DANCE FLOOR

The children of late Mrs. Adetoro were ushered onto the stage by the MC, as their guests came around to dance with them, and as well as sprayed them. Of course, each of the children had a glamourous entrance and display on stage but Biola Adetoro Williams and her loving husband, Jibola Williams stole the show.

Jibola Williams was once the Personal Assistant to the former deputy governor of Lagos State, Hon. Mrs. Adejoke Oorelope Adefulire. The appearance of the love birds on stage got the attention of virtually everyone in the hall. They dazzled and rocked the dance floor while their guests, family and associates rained money on them. Their display really added glitz and glamour to the entire party.

Jibola Williams is a socialite who is cool, calm and collected. A pool of friends and associates from far and wide graced the event to celebrate with him the burial of his mother-in-law. Notable among them are Captain Jide, Dehinde Lasisi, Senator Kunle, TJ  Oniru, Jibola Fagbems, Dayo Iyaniwura, Demola Oniru, Onimole Seyi Ogunde, Olohuwa Rafiu, Idayat King (Douala fabrics), Laide Olohuwa and many others.

NOTABLE PERSONALITIES AT THE EVENT

SOCIETY LADIES DAZZLE AT THE PARTY

The reception party was more like a carnival. It was graced by many socialites that came to felicitate with the children of the deceased. They caught lots of attention and fun.

Among the society women at the event, there was a gathering which drew the attention of many people. These women are beautiful, gorgeously dressed and trendy. They danced together and went to celebrate with each of the children of the deceased called by the MC. These women are Yeye Mofin, Barrister K. K. Ajose; Mrs. Linda Ajani (MD Wida Diamond Fashion), Dr. Helen Igudia from Radio Kwara; Yeye Biola Taiwo; Bose Amoo; Iyalaje Ajoke Ijebu and Alhaja Gold. They are all friends of Mrs. Busayo Adedeji, one of the loving daughters of the late Mrs. Adetoro. They were stars of the night.

Why Primate Ayodele Is A Prophet You Can’t Rubbish