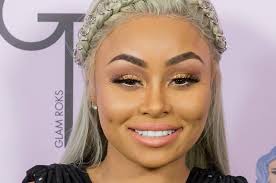 It looks like Blac Chyna has moved on from former babe, YBN Almighty as she has a new toy boy who is also a teenager.

Rumour has it that Blac Chyna after ending her relationship with 19-year-old rapper, YBN Almighty, has moved on to another teenager and this time it is the 19-year-old professional boxer, Devin Haney.

The rumour of relationship began after the mother of two posted a photo of the 19-year-old boxer on Instagram and captioned it with a quote.

“Hi, Babe.” It didn’t end there as the boxer replied her in the comments section with a love emoji. If this latest move is true then let’s just say the 30-year-old model has a thing for teenagers which is kind of weird.

It would be recalled that a few days ago, YBN Almighty announced that his relationship with Blac Chyna had come to an end.

A few days ago, YBN Almighty announce that the relationship between Blac Chyna and himself had ended. The rapper took to his Instagram page on Wednesday, June 20, 2018, where he announced the news. According to him, the relationship is over and they are moving on.

playYBN Almighty announces the split between Blac Chyna and himself

“@blachyna and I are no longer together,” the message wrote. This came as a surprise as no one saw the relationship coming to an end so abruptly.

A few months ago when all was still well in the relationship between Blac Chyna and her teenage boyfriend, YBN Almighty, they were spotted together with the rapper gragging her butt.

playThe couple all loved up

The two were shopping at Saks Fifth Avenue and the couple couldn’t get their hands off each other as they showed us what Public Display of Affection is all about. In one of the photos, you can see YBN Almighty grabbing Blac Chyna’s butt while in some they are both seen all loved up.

How I Suffered My Spinal Chord Injury Yrs Ago – GANI FAWEHINMI’s Son, MOHAMMED