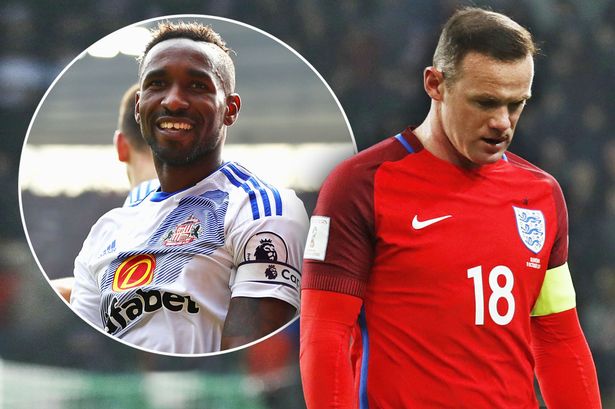 Defoe urged Wayne Rooney to look for regular playing time even if it was away from Old Trafford after England’s record goalscorer was left out of Gareth Southgate’s squad for the World Cup qualifier away to Scotland and a friendly with France.

The 31-year-old forward, who has lost his place in Manchester United’s first team, was also left out by England earlier this year for matches against Germany and Lithuania.

“I love Wazza. He’s an unbelievable player. Someone who’s done so much,” Defoe said.

“I read things about him and sometimes I’m quite taken aback… He came into the game young and played a lot of football. It’s not easy on the body, and mentally with all that pressure he’s under – probably more than most of the lads.

“I think he knows he’s got to play regular football. All I’d say is I wish him the best. He’s a top player and the lads love him here. Hopefully he’ll get the chance to go somewhere and express himself, and just enjoy playing.”

Defoe, who scored 15 goals in 37 league appearances for relegated Sunderland, had a medical at Bournemouth on Tuesday and is expected to re-join the south coast club where he had a year-long loan spell in 2000-01.

“What I want to do is… focus on England, the two games, and then after that everyone will know,” Defoe told reporters ahead of Saturday’s World Cup qualifier against Scotland.

“It’s documented about the Bournemouth thing. It’s a club close to my heart anyway, for obvious reasons…

“It’s a special place, with a top manager, and a team that’s done so well from where they’ve come from. A unique story.”

England will do battle against to Scotland on June 10 in preparation for their trip to France on June 13.

Meet Cafu, Other Sports Legend Who Have Their Birthdays Today | City People Magazine June 7, 2017 at 12:31 pm