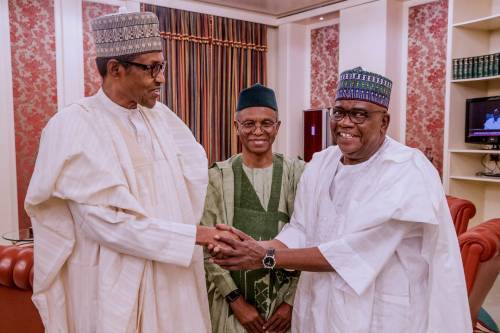 Economic and Financial Crimes Commission (EFCC) has withdrawn from a case of financial misappropriation preferred against Senator Danjuma Goje in what SaharaReporters can confirm to be a deal between President Muhammadu Buhari and Goje.

Goje is accused of stealing N5 billion between September and November 2010, after forging a document titled, ‘Resolution authorizing His Excellency the Executive Governor of Gombe State to acquire a loan of with Ref. No: GM/HA/RES/VOL. 1/17.

SaharaReporters had exclusively reported that Goje stepped down for Senator Ahmed Lawan in the race for the Senate Presidency in exchange that the charges of financial impropriety leveled against him by the EFCC be dropped on orders of President Buhari.

The President, who is leading a so-called ‘war against corruption’, struck the deal to enable the attorney- general of the federation take over the case in order to stall it and ultimately quash it.

At the resumed hearing of the case at the Federal High Court Jos on Friday, one Pius Ukeyima Akutah from the Ministry of Justice took over the case from EFCC’s counsel, Wahab Shittu.

Goje was represented by Chris Uche and Paul Erokoro both Senior Advocates of Nigeria (SAN).

Until the shady takeover, the EFCC had diligently prosecuted Goje’s case for eight years.

The case was adjourned until June 21 when Asika is expected to file for a discontinuation of the case based on a directive from President Buhari.