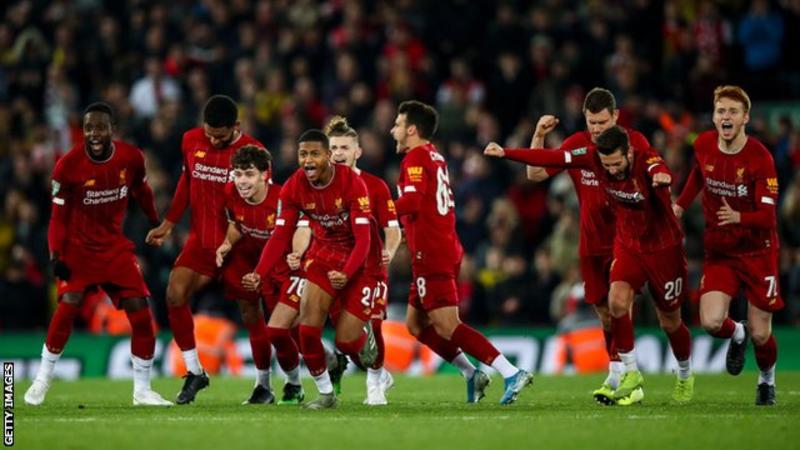 Liverpool beat Arsenal on penalties to secure their place in the quarter-finals of the Carabao Cup after 10 goals were scored in a thrilling contest at Anfield.

Celebrations broke out in front of the Kop after 20-year-old Liverpool goalkeeper Caoimhin Kelleher saved Dani Ceballos’ penalty to set up a 5-4 shootout win.

Teenager Curtis Jones coolly thumped the final penalty in off the post to make it five from five for the home side.

Divock Origi’s 94th-minute scissor kick had sent the game to penalties after Liverpool had twice come from behind to draw level.

Arsenal’s Joe Willock thought he had given his side a memorable victory with a sensational long-range strike in the second half but there was more to come on an unforgettable night at Anfield.

The Gunners were minutes away from victory after Willock’s stunning long-range effort put them 5-4 up, before Origi struck.

Liverpool led just once during the normal time – after just five minutes when Shkodran Mustafi slid in and diverted the ball into his own net.

Midfielder Mesut Ozil, given just his third start of the season, then set-up Bukayo Saka, whose shot was rebounded in by Lucas Torreira to make it 1-1.

Teenager Gabriel Martinelli continued his impressive goalscoring form, pouncing on a loose ball at the near post before slotting in from Saka’s pass to make it 3-1 to Arsenal.

But Liverpool cut their lead to one goal on the stroke of half-time through James Milner’s penalty after Harvey Elliott – who became the youngest Liverpool player to start at Anfield (16 years, 209 days) – went down in the box under minimal contact from Martinelli.

It took just nine minutes for the goals to start flowing again in the second half when Milner uncharacteristically gave the ball away in his own area and Ozil teed up Ainsley Maitland-Niles.

Alex Oxlade-Chamberlain fired in an excellent long-range effort for Liverpool and Origi’s smart turn and powerful finish made it 4-4 – all this before Willock and Origi’s late goals left the teams level at 5-5.

Liverpool will find out their quarter-final opponents when the draw takes place at 08:45 GMT on Thursday, live on BBC Radio 2.