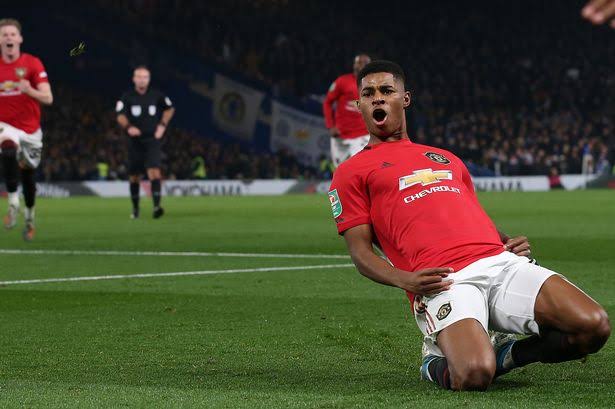 Marcus Rashford’s sensational free-kick winner was like something Cristiano Ronaldo would produce, Manchester United boss Ole Gunnar Solskjaer said after his side beat Chelsea to reach the Carabao Cup quarter-finals.

The England striker gave United the lead with a penalty after Marcos Alonso fouled Daniel James.

Michy Batshuayi equalised for Chelsea, who had won their last seven games, with a great run from the halfway line and finish from outside the box.

But Rashford won the game with a swerving, dipping 30-yard free-kick into the top corner.

“It was very Cristiano-like,” said Solskjaer. “The boy has nerves of steel, He takes a penalty no problem, and then steps up and hits the ball like he did and wins us the game. Fantastic.

“He works too much on it. I’ve always tried to get him scoring simple tap-ins and being inside the box. He always scores great goals.”

The quarter-final draw will take place on Thursday at about 08:45 GMT on BBC Radio 2’s Zoe Ball Breakfast Show.

Solskjaer named a strong side, saying he wanted to “keep the momentum going” – with 19-year-old Brandon Williams the only unfamiliar youngster to start.

And it worked as they won for the third game in a row, all away from home – after a run of six games without a win.

Scott McTominay had already gone close to an opener when Rashford – who missed a penalty in Sunday’s 3-1 win at Norwich in the Premier League – sent Willy Caballero the wrong way from the spot.

Chelsea made six changes from Saturday’s win at Burnley and did not look their usual selves. Christian Pulisic, who scored a hat-trick at Turf Moor, failed to have much of an impact, although he did drag a shot wide in the second half.

Batshuayi’s equaliser was wonderful as he flicked Caballero’s long kick on with his head, before beating Harry Maguire for pace and smashing home from 25 yards.

But the headlines belong to Rashford, who turns 22 on Thursday, who settled the game with a fantastic free-kick – his fourth goal against Chelsea this season.