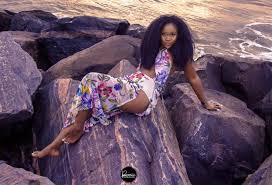 Cee-c, who emerged First runner up, after Miracle won the just concluded reality show, arrived the airport at 8:00 p.m alongside other housemates.

It was gathered that a rowdy mob booed and slammed the car which came to pick her her from the airport.–

They reportedly insulted her, banged the doors to her car before security operatives intervened.

Mehn cee-c was dragged, this is sad #BBNaija pic.twitter.com/ik4gA4dvug

Robin gets dark in the first trailer...