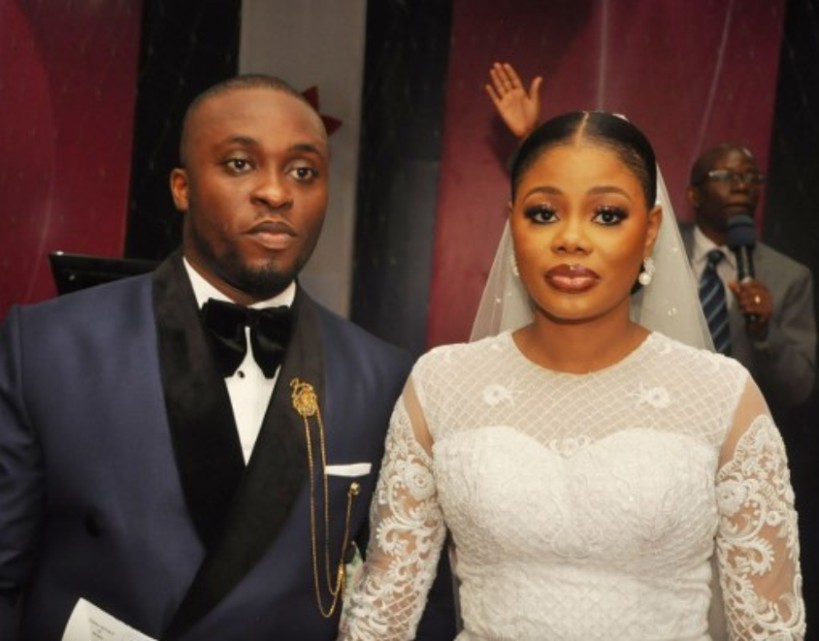 •Details Of The Classy Wedding In LAGOS

What started as a quiet marriage ceremony between Olayibo Sherifat Olatunde and Olasubomi Muyideen Lawal became a talk of the town event on Saturday, January 15, 2021, as these two lovers took to the altar to solidify their union.

The event started brightly with a solemnization of the holy matrimony that held at the Redeemed Christian Church of God, RCCG, Shekinah Glory Parish, Aladelola Street, Ikosi Ketu, Lagos. The joy on the faces of the parents of the couple, Pastor & Deaconess Olatunde Sule and Chief Dr Tunde & Mrs Yetunde Lawal was simply contagious as they were full of smiles all through the event.

Let’s also tell you that the grand reception of the event held at the popular 10 degrees event centre in Lagos. Did you know that big names like the Deputy Governor of Kwara State, H/E Kayode Alabi led top politicians down to the event in Lagos? We will also not fail to mention to you how the top and first-class Royal Fathers stormed the event in grand style. It was indeed a colourful day for the couple as well as their parents. They had strong pillars behind them and their pillars didn’t let them down.

City People’s Brands Editor, DAMILARE SALAMI 07033526688 was at the event, he was assisted by photojournalist, SUNDAY OYEMADE. Below are excerpts from the grand reception for your reading pleasure, enjoy.

LATEETOH EVENTS WITH A TOUCH OF CLASS

The success of the event can only be attributed to the planner who put in her very best to ensure that everything went well. Everyone at the event was busy talking about how classy the reception was and how all the activities were perfectly in sync with each other. Give it to OLADELE BOLATITIO, the Creative Director of Lateetoh events, she ensured that all the guests had value for their time. From the foods to drinks and music, it was a perfect blend of entertainment and owambe.

He is young, dynamic and a versatile Compere. He has hosted over 100 events and everyone is a new chance to showcase the talent within. The man we’re talking about here is no other than Sola Rahman, a classy MC with the swag. Popularly known as The Sola Rahman Brand, MC Sola was equal to the task. He ensured that the entertaining aspect of the event came to the fore each time he handled the microphone. The Sola Rahman Brand is not your regular compere, he is an MC with class and highly experienced. His couple’s game was another talking point. Everyone including the Royal Fathers in attendance was excited to be a part of the show.

Anyone who knows the 10 Degrees event centre would absolutely agree that it is such a very large auditorium that is sometimes quite difficult to manage and decorate. But the event décor had no problem at all doing this. The auditorium was well lit and well decorated with a touch of white and gold. The bandstand was equally decorated. The beauty of the auditorium was simply expressed by the décor arts.

The groom’s father, Dr Chief Tunde Lawal is a popular name on the Lagos social scene. He is a highly connected businessman and also one of the biggest chiefs of the Olofa of Offa. He is the Parakoyi of Offa Kingdom. Further findings by City People revealed that he has a very strong network in the Lagos Business circle. His connections saw to it that many top businessmen, as well as royal fathers, were present at the event. His wife, Chief Mrs Yetunde Lawal is equally well connected too. The bride’s parents are the top ministers of God in Lagos. Pastor and Deaconess Olatunde Sule have a solid foundation in the Christian faith and that is exactly what they have sown into their daughter who got married to the love of her life.

THE ASO-EBI LADIES STAND OUT

There was a special set of gorgeous ladies everyone at the party took note of. They were all dressed in beautiful and very stylish lace. City People’s findings revealed that they are friends of the bride. They all stunned in sky blue lace material. While the couple was having its dance, they stood very close to them helping out. They also participated in the couple’s game spearheaded by the compere, MC Sola Rahman.

… AND THE TRAIN WAS LONG

I am not sure you have seen such a long bridal train before now; the bridal train consisted of the Aso-Ebi men and women, the supporting cast as well as very close friends of the couple. The groom’s gang stunned in white agbada and royal blue cap, they led the dance with the Aso-Ebi ladies and were then followed by the ladies of honour and men in suit before the couple. The couple’s entry took a while. Lateetoh’s events was on top of her game at this time. The couple’s entry only matched those seen in movies but the reality was that #TheOSFairytale wasn’t a movie; it was a reality that many people witnessed and would live to tell the fairytale.

DJ BIG TIJ is an absolute party rocker and a top-notch disk jockey. He was on the wheel of steel at the event and his expertise came to the fore while the couple was having its procession. He was also in charge of the after-party and it was the bomb. He proved to be equal to the task when he was called upon to deliver. Let’s quickly tell you that this young and hardworking man is an entertainer to the core. He entertained the guests in such a way that added glamour and class to #TheOSFairyTale.

IT WAS THE ROYAL FATHER’S RENDEZVOUS

When we tell you that #TheOSFairyTale was the royal father’s rendezvous, we mean exactly that. Many royal fathers turned up for Ola and Subomi and it became the Kings hangout at the end of the day. The royal glitz and glamour started with the entry of the Olofa of Offa, His Royal Majesty, Oba Mufutau Muhammed Oloyede Gbadamosi, Okikiola Esuwoye II hails from Anilelerin Ruling House Offa, in Offa Local Government Area of Kwara State. He came with a full entourage, the entire Olofa in council members.

The Deputy Governor of Kwara State, H/E Kayode Alabi was one of the top dignitaries that made the event. His entry was grand. He came alongside top politicians in Kwara State. It will be just safe to say that the whole of Kwara State intentionally shut down Lagos for this young and new couple. It is certain that the parents of the groom who hail from Offa in Kwara State have pulled a very strong string in the state and this was the reason the entire Kwara State was on a standstill for #TheOSFairyTale.

Have you been attending a lot of parties and events in Lagos over the last 6 months or so? If yes, you must have seen ARISTOS Band thrilling guests. It is one of the best and hottest bands in Lagos. It is fast becoming the band of choice for many celebrities who invite them to perform at their parties. And at every party they have performed they got a standing ovation because they are usually the life of the party. The ARISTOS Band is a Live Band led by the one and only Sammy Sodeke, who blows the Sax. They were on the bandstand at #TheOSFairyTale and we can tell you for free that they transformed the fairy tale into a reality with a first-class gbedu and perfect owambe vibes.

This gist would not be complete if we don’t tell you about how the many royal fathers at the event stormed the dance floor. At this time around, they were led by the popular Lagos monarch, the Elegushi of Ikate land, Oba Saheed Elegushi. His presence on the dance floor spelt wealth and affluence and he was flanked by the Akinsiku of Lagos Oba Olalekan Dosumu at the left while the Olofa of Offa flanked him at the right-hand side. The Aristos band was completely mesmerized by the number and class of royalty dancing to its tunes and in turn, dropping the cash in such a huge manner.

LAGOS POLITICIANS NOT LEFT OUT TOO

Let us also quickly inform you that Lagos politicians are not always scarce in an event of such magnitude. Of course, they were invited and also had their table of honour. The deputy speaker of the Lagos State House of Assembly, the Rt Hon. ESHINLOKUN SANNI WASIU also led a group of other politicians in the state to grace the occasion. It was indeed a star-studded wedding reception party.