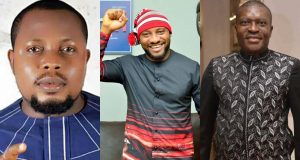 Election season is around the corner and some of your favourite celebrities are already declaring their intentions to run for public offices.

These celebrities have made names for themselves in the entertainment industry and decided to answer the calls from their people to represent them.

Just maybe these guys have seen how one of their colleagues, Desmond Elliot have been able to handle politics and a career in acting in last three years and have decided to take the leap of faith to join in on the action. Here are some celebrities who will be running for public office in 2019.

He needs no introduction guys, Kanayo O. Kanayo is a veteran actor, he knows his onions when it comes to acting and is known to be one of the biggest exports from the Nollywood industry. Forget about his stereotype roles in movies which we all love, Kanayo is a great guy and we love him.

The movie star will be running the seat of a member of the House of Representatives in Ahiazu/ Ezinihitte Mbaise Federal Constituency, Imo State under the  All Progressive Grand Alliance (APGA). He made this know on his Instagram page on Wensday june 6, 2018.

playKenneth Okonkwo wants to be the next governor of Enugu state

Just like Kanayo O. Kanayo, we’ve been blessed to have Kenneth Okonkwo on out T.V. scenes for over two decades display his acting prowess. Famous for his role in the movie ‘Living In Bondage,’ Kenneth Okonkwo is another living icon whose years in the in the entertainment industry played a major role in its evolution.

Well, Kenneth Okonkwo has revealed that he wants to be the next governor of his state Enugu in the next governorship elections. The veteran actor who is known for his spontaneous acting prowess revealed his new intention via his Instagram page on Sunday, March 4, 2018, where he posted a couple of photos from his declaration event.

For Yul Edochie, he has a lot going on for him, he is still very young unlike the other guys on this list he kind of has a not so long experience already in politics. Yul Edochie apart from being a very talented actor is the son of Nollywood’s great, Pete Edochie. When it comes to running for political office, Yul has tasted the adrenaline rush involved in it and has also seen defeat in its eyes.

Yul Edochie once ran for the position for the governorship position of Anambra state and lost to the incumbent governor, Willy Obiano. However, he has since moved on and will be running for the highest position in the country come 2019.

The actor turned politician took to his Instagram page on Monday, April 23, 2018, where he declared his intention. According to the actor, he wants to bring the problems of the country to the last bus stop.

Check out list of celebrities who have declared intentions to run for elections in 2019 was last modified: June 8th, 2018 by Igbokwe John