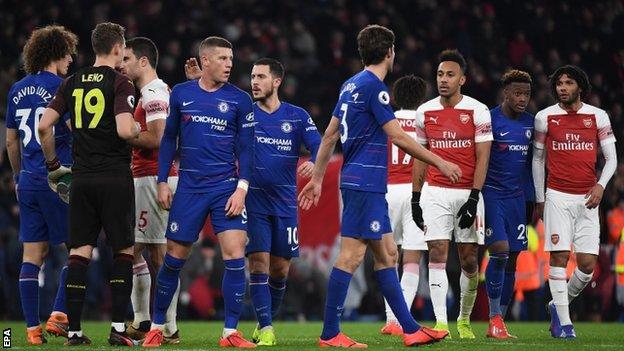 Chelsea manager Maurizio Sarri said his players are “extremely difficult to motivate” as he heavily criticised their performance in defeat at Arsenal.

The Blues lost 2-0 in the Premier League at Emirates Stadium on Saturday and only had one shot on target.

Chelsea have only won two of their past five matches and are now just three points clear of the Gunners in fifth and sixth-placed Manchester United.

“I’m really angry about the approach that we adopted today,” Sarri said.

In a remarkable news conference after the defeat, Sarri said he wanted to speak in his native Italian rather than English “because I want to send a message to my players and I want my message to be very clear”.

“I have to say, I’m extremely angry. Very angry indeed,” said the 60-year-old, who succeeded compatriot Antonio Conte at Stamford Bridge in the summer.

“This defeat was due to our mentality, more than anything else. This is something I can’t accept.

“This group of players are extremely difficult to motivate.”

Sarri’s starting line-up against Arsenal included seven players who won the Premier League under Conte in 2017, before going on to finish fifth the season after.

The Italian said: “This is not a team that is going to be well known for its battling qualities but we need to become a team that is capable of adapting, possibly suffering for 10 or 15 minutes then playing our own football.

“You can find yourself in difficulties from time to time, but we need to react to those difficulties a lot better than we did today.”

Chelsea scored 27 goals in their opening 11 league matches this season but have netted only 13 times in the 13 games since.

Strikers Olivier Giroud and Alvaro Morata have fallen out of favour and the club have been heavily linked with a move for Juventus forward Gonzalo Higuain, who Sarri worked with at Napoli.

Sarri said the team’s mentality could be improved by a new signing.

“You have to influence them. It could be about a new player coming in or one of the old heads taking control,” he said.

“A player at this level can’t be afraid to face up to their responsibilities.

“The best thing that can happen is that the players and I talk very openly about what happens.

“I am the person responsible for the players and it is important for them to have the attitude.

“If they can’t then maybe they shouldn’t be playing at this level.”