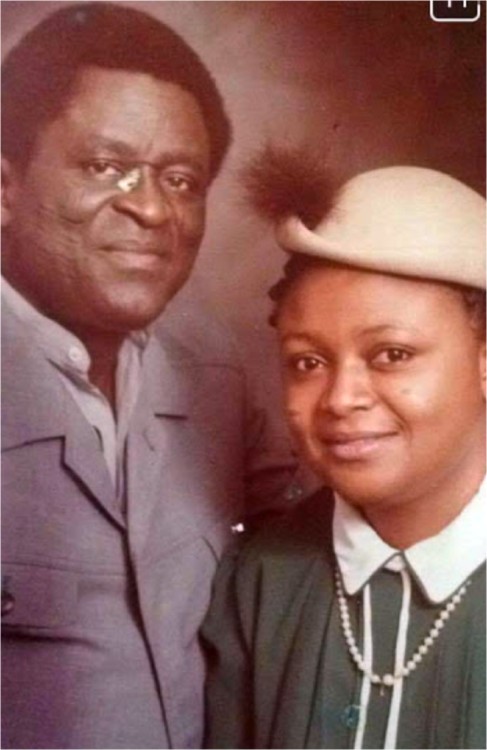 How time flies! It is 25 years ago that Alhaji Chief Bolarinwa Yaqub Abioro, a Big businessman and Muslim leader passed on. In his lifetime, his personality and image loomed large on the horizon. He was a great man. He was the Seriki Musulumi Egbado & Balogun Ipokia. He was the owner of the popular TYC Records, among his many other businesses.

Its 25years since he died and his beautiful widow, Chief Alhaja Atinuke Abioro, her daughter Mobola and granddaughter, Oluwatamilore are all remembering him.

What sort of a person was he? City People can reveal a lot about this accomplished businessman who was well known across the South West. He was one of the most successful businessmen of his generation and the richest.

Let’s tell you more. He was truly accomplished. Alhaji Chief Bolarinwa Abioro was born on the 2nd of August 1927 to the humble family of Alhaji Ismail and Alhaja Falilat Abioro.

He developed so much interest in music and that really brought him to the limelight with the establishment of TYC Take Your Choice. TYC became a household name for searching for musical talents and promoting them by buying instruments and outfits for them and also sponsoring them for overseas trips.

Apart from musical interests, Chief Abioro was a big Cocoa Merchant with the likes of his childhood friends like Chief Lekan Salami and others. They later came together to form an association AWAM Egbe Awawa Association of West Africa Merchants. It was extended to some of the men even outside Nigeria. Only one of them is alive now to the Glory of God Almighty. The late members were Hector Omooba, the retired Commissioner of Police, General Adeyinka Adebayo, Chief Kolawole Balogun, Chief Adeleke Oshinjinrin, Alhaji Adeyemi Odueke, Chief Omotayo Alowonle, Chief Olalekan Salami, Barrister Abiola Oshodi, Chief Oladipupo Onanubi, Kabiyesi Oba Okunade Sijuade, Olanrewaju Oshikoya and Alao Oladipupo Baba Oja. The surviving member is Chief Moses Odunuyi.

ACCOLADES AS WE REMEMBER CHIEF ABIORO 25 YEARS AFTER DEPARTURE!!!

Twenty-five years ago, Chief Yaqub Bolarinwa ABIORO departed this sinful world and returned no more! Ipokia, Ogun State and Nigeria lost a Hero, Legend and a rare gem who lived for many of us while placing Ipokia on the world map together with other progressive leaders.

I never knew the worth of Chief as we fondly called him not until I was admitted to Federal Polytechnic Ilaro in 2001 and fate took me to the Polytechnic Library. A book titled WHO IS WHO IN NIGERIA caught my glimpse and I was surprised to find Chief Abioro’s name synonymous to Ipokia! Anywhere I mention Ipokia as my country home, people are quick to say that is Abioro’s town. I wonder if he lived for a thousand years! He has gone for 25 years now but his legacies live on! Most of our great personalities today in Ipokia Local Govt and beyond are product of his mentoring.

I was young to benefit from his largesse directly before his death, I live to know I have benefited indirectly from his footprints on Ipokia development strides. While performing my National Youth Service as a Corps Member in Rivers State, fate took me to meet a High Chief from Ede in Osun State who had an empire in Port Harcourt. We got talking and he inquired about my origin. Wooooow, I couldn’t believe the magic the name ABIORO did to open doors of opportunities for me starting from that day. Good name is golden, may we all live to build good names that open doors for generations unborn.

For mentoring and developing many successors for us in all facets of life, we remain grateful perpetually and we pray that God continue to bless your eternal journey. We love you Chief ABIORO, continue to sleep in the bosom of the lord.

Today marks 20 years that Ipokia, Ogun and Nigeria lost a Hero, Legend and a rare Gem. Chief Yaqub Bolarinwa ABIORO placed Ipokia on the world map together with other development-loving leaders. I never knew the worth of Chief as we fondly called him not until I was admitted to Federal Polytechnic Ilaro in 2001 and fate took me to the Library. A book titled WHO IS WHO IN NIGERIA caught my glimpse and I was surprised to find Abioro’s name synonymous to Ipokia! Anywhere I mention Ipokia as my country home, people are quick to say that is Abioro’s town! I wonder if he was the first man to have ever existed in Ipokia. He has gone for 20 years now but his legacies live on! Most of our great personalities today in Ipokia Local Govt are a product of his mentoring including; The Onipokia of Ipokia Land, Otunba Akeem Adigun SOCOPAO, Alhaji Segun Adeosun SMADE and lots more. For mentoring and developing these successors for us, we remain grateful perpetually and we pray that God continues to bless your eternal existence. We love you Chief ABIORO, continue to sleep in the bosom of the lord.

BABA made gigantic records that no one in Ipokia land has made. I remember any time I listen to those old Yoruba musicians, baba’s name is always mentioned.  May the Almighty Allah bless all that he left behind and may God bring someone who can as well emulate baba’s ideologies and theories which were/are meant for the uplift of Ipokia in General… Iree o

Since you have left this planet earth, you have been irreplaceable. May Almighty Allah continue to grant you Aljanah Fidau. Adieu, baba Bolarinwa Abioro,a man of impeccable credentials in all ramifications.

I want to challenge you comrade Scholar Ola Agbetokun, your Youth Forum should set aside a particular date to celebrate the Ipokia heroes. Late BABA Abioro who was a business mogul and lover of all and Baba Olatunji, Y.A.B

, the greatest Yoruba Author in Ogun State generally whom through his books touched so many students in the southwest. These are the true heroes of the soil and they need to be celebrated. In fact, I want to suggest schools should be named after them just as it happens in Lagos

THIS IS AN EXTRACT FROM THE TRIBUTES BY SOMEBODY ON FB.

Chief Bolarinwa Abioro an astute politician, a teacher by profession,  advocator by destiny… We will forever remember u… We celebrated him in 2015 at Triumphant leadership Awards/Celebration Day… The award that distinguished for our late heroines in Nigeria and international… The fourth edition will be in South Africa next year will he is among the Ist to 10th Africa late heroes/heroine to be celebrated… Nobody can ever nor ever fill the vacuum he left behind ever since his demise from us… We lost you and we have lost ur indelible impacts. Talk of entertainment he is the African man established and promote Nigerian singer who are making wave in Music today… Talk in industrialist… He is the Ist African man to import furniture finished goods to Nigeria. And he was decorated the so-called Aso Rock… Talk of civil activist… He is the one who fought for Ipokia’s paramount status… Till his death….well your memories still linger on rest well.

What TINUBU & Gov. OYETOLA Have Against...