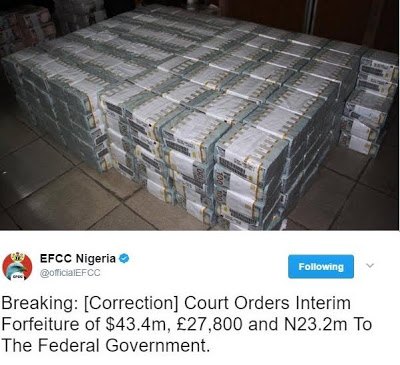 The Federal High Court in Lagos has ordered that the $38million, N23million and £27,000, recovered by the Economic and Financial Crimes Commission (EFCC) in a residential building located at Osborne Towers, Ikoyi be temporarily forfeited to the Nigerian government.
In a ruling presided by Justice Muslim Hassan this afternoon, he ordered that the funds be handed over to the Federal Government pending when the owner surfaces to make a court case against the order. The case was adjourned until May 5, 2017.
Court hands cash EFCC recovered in Lagos to FG was last modified: April 13th, 2017 by Reporter