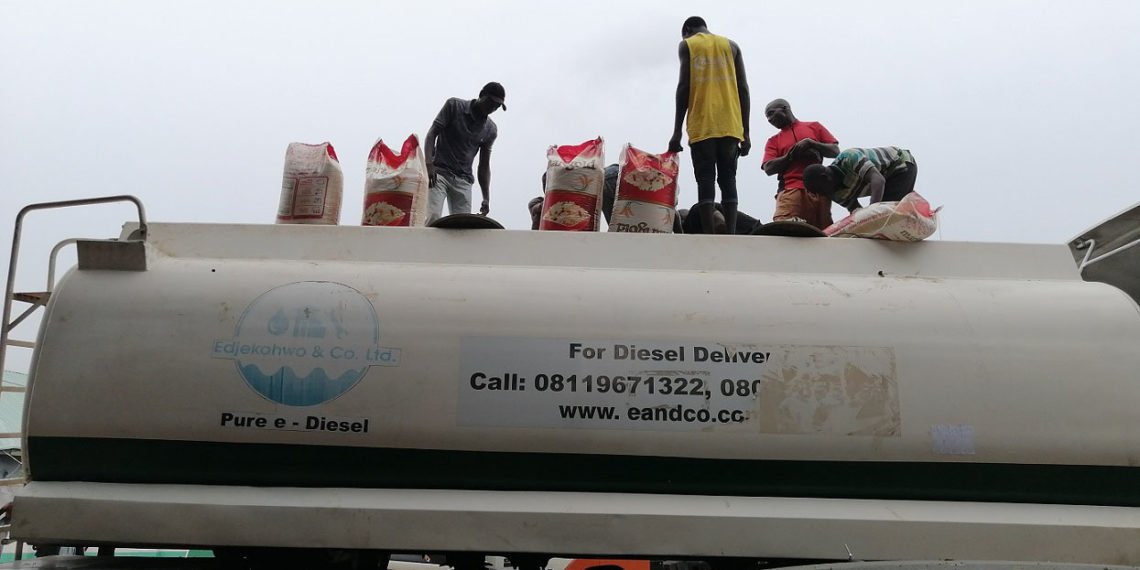 Smugglers are reinventing their craft, as Customs personnel found out when they intercepted a fuel tanker loaded with smuggled foreign rice on the Kaduna-Abuja Expressway.

The road is notorious for kidnapping and banditry but it seems smugglers are finding it useful for their illicit business.

Area Controller of the Niger/Kogi command Yusuf Abba-Kassim, whose men made the seizure, said smugglers have started using tankers that are supposed to be used to carry petroleum products to conceal and convey banned goods into the country.

“This tanker, DAF diesel tanker of six tyres with registration number RBC-05 ZS that you are seeing, is supposed to be a diesel tanker but as you can see, it is carrying rice. Officers of the Customs Command intercepted this tanker along Kaduna-Abuja Expressway at Dikko Junction which is the end of Niger road.

“Bags of rice were found concealed inside the tanker. Our men had to use the new anti-smuggling strategies to unveil this strategy employed by these smugglers.”

Kassim said two people were arrested along with the driver, adding that investigations are ongoing to know where they are coming from and where they are heading to.

He said two trucks, 1,497 50kg imported bags of rice, nine bales of used clothing and eight used cars were seized in the month of October.

“In the month of October, we intercepted one DAF (ten tyres) with registration number MNA 893 XV loaded with 950 50kgbags of imported rice, four Toyota Corolla conveying cumulatively a total of135 50kg imported bags of rice.

“Nine bales of used clothing, two Toyota RAV4, one Peugeot 207, one Mazda Primacy were seized while 397 50kg imported bags of rice were found hidden within the forest by smugglers. The seizures were made at different locations within the Command’s area of coverage in October.

“The Controller expressed concern that despite the federal government’s visible efforts in transforming the agricultural sector, the smugglers remain unrepentant in bringing in smuggled goods into the country.

“It is worrisome that some Nigerians remain unrepentant even as they continue to lose. Not even the federal government’s visible efforts in transforming the agricultural sector, especially in the area of rice production as well as the increased prevalence of expired imported rice with its hazardous health implications have touched their conscience to avoid smuggling.

“The Controller then reiterated the resolve of the Customs to beat all the concealment pattern of the smugglers with the Customs superior intelligence network.

“The arrest of a diesel tanker meant for convening diesel now used in concealing smuggled imported foreign rice should send a serious signal to these recalcitrant saboteurs of the Nigerian economy that there is no more hiding place for them.”